Nearly Half of US Seafood Supply Is Wasted

As much as 47 percent of the edible U.S. seafood supply is lost each year, mainly from consumer waste, new research from the Johns Hopkins Center for a Livable Future (CLF) suggests.

The findings, published in the November issue of Global Environmental Change, come as food waste in general has been in the spotlight and concerns have been raised about the sustainability of the world's seafood resources. In the U.S. and around the world, people are being advised to eat more seafood, but overfishing, climate change, pollution, habitat destruction and the use of fish for other purposes besides human consumption threaten the global seafood supply.

This image shows from sea to table to trash how seafood is wasted. 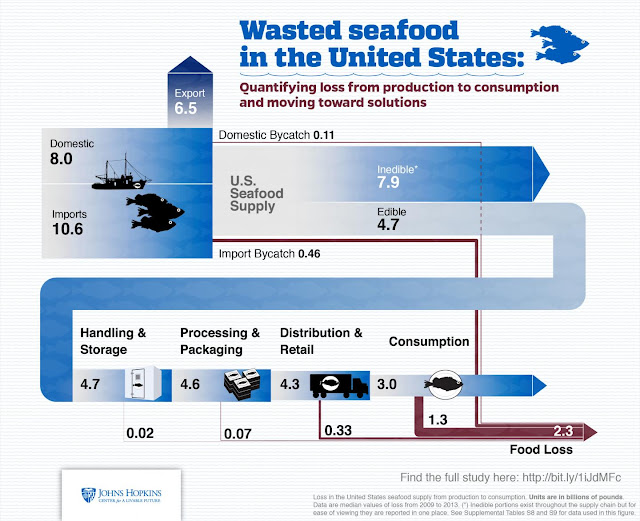 "If we're told to eat significantly more seafood but the supply is severely threatened, it is critical and urgent to reduce waste of seafood," says study leader David Love, PhD, a researcher with the Public Health and Sustainable Aquaculture project at the CLF and an assistant scientist at the Johns Hopkins Bloomberg School of Public Health.

The new study analyzed the food waste issue by focusing on the amount of seafood lost annually at each stage of the food supply chain and at the consumer level.

The researchers found the greatest portion of seafood loss occurred at the level of consumers (51 to 63 percent of waste). Sixteen to 32 percent of waste is due to bycatch, while 13 to 16 percent is lost in distribution and retail operations. To illustrate the magnitude of the loss, the authors estimate this lost seafood could contain enough protein to fulfill the annual requirements for as many as 10 million men or 12 million women; and there is enough seafood lost to close 36 percent of the gap between current seafood consumption and the levels recommended by the 2010 U.S. Dietary Guidelines.

The 2010 U.S. Dietary Guidelines recommended increasing seafood consumption to eight ounces per person per week and consuming a variety of seafood in place of some meat and poultry. Yet achieving those levels would require doubling the U.S. seafood supply, the researchers say.

Waste reduction has the potential to support increased seafood consumption without further stressing aquatic resources, says Roni Neff, PhD, director of the Food System Sustainability & Public Health Program at CLF and an assistant professor with the Bloomberg School of Public Health. She says that while a portion of the loss could be recovered for human consumption, "we do not intend to suggest that all of it could or should become food for humans."

"It would generally be preferable for the fish that becomes bycatch to be left alive in the water rather than eaten, and due to seafood's short shelf life, it may be particularly challenging compared to other food items to get the remaining seafood eaten or frozen before it decays," she says. Instead, focusing on prevention strategies involving governments, businesses and consumers can reduce seafood loss and create a more efficient and sustainable seafood system.

The researchers offer several approaches to reduce seafood waste along the food chain from catch to consumer. Suggestions range from limiting the percent of bycatch that can be caught at the production level to packaging seafood into smaller portion sizes at the processing level to encouraging consumer purchases of frozen seafood. Some loss is unavoidable, but the researchers hope these estimates and suggestions will help stimulate dialogue about the significance and magnitude of seafood loss.


"Wasted seafood in the United States: Quantifying loss from production to consumption and moving toward solutions" was written by Dave C. Love, Jillian P. Fry, Michael C. Milli and Roni A. Neff.
on September 24, 2015