On Sept. 13, 2015, the Solar and Heliospheric Observatory -- a joint project of the European Space Agency and NASA -- discovered its 3,000th comet, cementing its standing as the greatest comet finder of all time. Prior to the 1995 launch of the observatory, commonly known as SOHO, only a dozen or so comets had ever even been discovered from space, while some 900 had been discovered from the ground.

This narrated video shows an artist's representation of the paths of almost 2,000 comets either discovered or seen by SOHO. Different colors represent different families of comets. Red represents the Kreutz family of comets, which count for 85 percent of all the comets found by the Solar and Heliospheric Observatory.

The dot in the cross-hairs is a comet streaming toward the sun, as seen on Sept. 14, 2015, by the ESA/NASA Solar and Heliospheric Observatory. This is the 3,000th comet discovered in the data from that space telescope since it launched in 1995. The comet was originally spotted by by Worachate Boonplod of Samut Songkhram, Thailand. 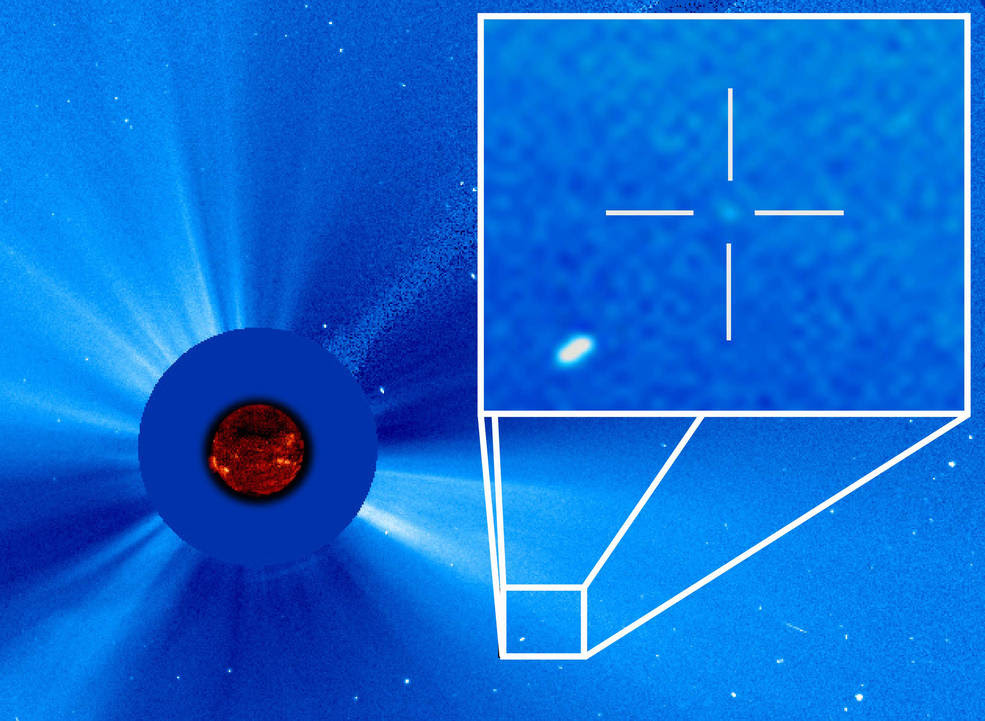 The 3,000th comet was originally spotted in the data by Worachate Boonplod, of Samut Songkhram, Thailand.

"I am very happy to be part of a great milestone for SOHO's comet project," said Boonplod. "I would like to thank SOHO, ESA and NASA for making this opportunity possible, including other fellow comet hunters who I have learned a lot from.”

SOHO's mission is to observe the sun and interplanetary space, above Earth's atmosphere that blocks so much of the sun's radiation. From there, SOHO watches the solar disk itself and its surrounding environment, tracking the constant outward flow of particles known as the solar wind, as well as giant explosions of escaping gas called coronal mass ejections, or CMEs. In its two decades in orbit, SOHO has opened up a new era of solar observations, dramatically extending our understanding of the star we live with.

The telescope’s comet prowess, however, was unplanned and has turned out to be an unexpected benefit. With its clear view of the sun's surroundings, SOHO can easily spot a special kind of comet called a sungrazer, because of its close approach to the sun.

"SOHO has a view of about 12-and-a-half million miles beyond the sun," said Joe Gurman, mission scientist for SOHO at NASA's Goddard Space Flight Center in Greenbelt, Maryland. "So we expected it might from time to time see a bright comet near the sun. But nobody dreamed we'd approach 200 a year."

SOHO's great success as a comet finder is dependent on the people who sift through its data – a task open to the world as the data is publicly available online in near-real time. A cadre of volunteer amateur astronomers dedicate themselves to searching the data via the NASA-funded Sungrazer Project. While scientists often search SOHO imagery for very specific events, various members of the astronomy community choose to comb through all the imagery in fine detail. The result: 95 percent of SOHO comets have been found by these citizen scientists.

"The people who have found comets represent a very broad cross section as the program is open to anyone who has interest," said Karl Battams, a solar scientist at the Naval Research Laboratory in Washington, D.C. Battams has been charged with running the SOHO comet-sighting website since 2003. "There are scientists, teachers, writers. We have even had two 13-year-olds."

More than just a celebrated bright vision in the night sky, comets can tell scientists a great deal about the place and time where they originated. Comets are essentially a clump of frozen gases mixed with dust. They are often pristine relics that can hold clues about the very formation of our solar system. On the other hand, if they have made previous trips around the sun, they can hold information about the distant reaches of the solar system through which they've traveled.

Watching these sungrazing comets also help us learn about our sun. Their tails of ionized gas illuminate magnetic fields around the sun, so they can act as a tracer that helps scientists observe these invisible fields. Such fields have even ripped off comet tails allowing astronomers to watch the lost tails blowing in the steady outpouring of solar particles streaming off our closest star. The tails act as giant windsocks in this solar wind, showing researchers the details of the wind's movement.

At almost 20 years old, the SOHO mission is a respected elder in NASA's Heliophysics System Observatory – the fleet of spacecraft that both watches the sun and measure its effects near Earth and throughout the solar system. SOHO is a cooperative effort between ESA and NASA. Mission control is based at NASA Goddard. SOHO’s Large Angle and Spectrometric Coronagraph Experiment, or LASCO, which is the instrument that provides most of the comet imagery, was built by an international consortium, led the Naval Research Lab in Washington, D.C.