NASA Lays the Groundwork for Homesteading in Space with 3D Printing

When moving from one city to another, people rarely bring their house with them -- they just rent, buy or build a new one. Astronauts don't have the luxury of a realtor on other planets, or even a hardware store in space. They generally bring everything they might need on their journey, no matter how small, which increases cargo mass – and mission cost.

Rather than loading all their materials or waiting for a resupply mission, scientists and engineers at NASA's Marshall Space Flight Center in Huntsville, Alabama, are asking -- what if astronauts could simply use what they found when they arrived on a new destination like Mars? What if they could live off the land, make tools, equipment and even habitats with Martian dirt or a recyclable material?

Additive manufacturing, or 3-D printing, can help do just that. This developing field is rapidly changing the way space systems are designed and manufactured, reducing cost and production time.

An artist's rendition of what building a structure using on-site regolith and additive manufacturing might look like. This is a technology under development for use in deep space exploration. 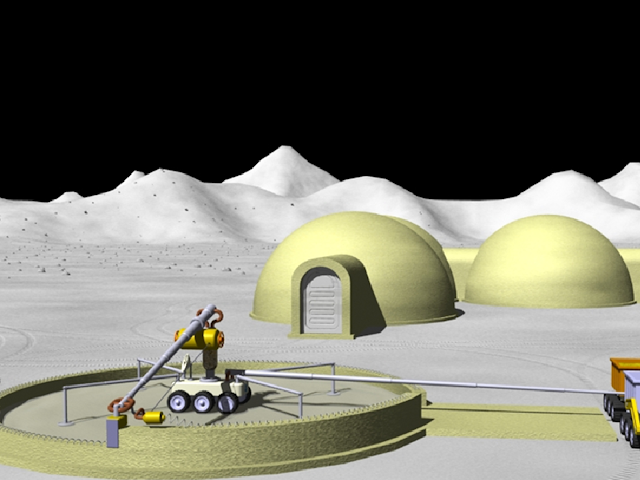 In November 2014, crew members aboard the International Space Station began testing a 3-D printer that layers a heated plastic filament to create a variety of three-dimensional test designs, including a wrench. The Marshall Center is managing the on-orbit development of this technology and is now analyzing and testing the durability of the first items made in space by comparing them to similar items manufactured on Earth.

Marshall became involved in additive manufacturing when it was still an emerging technology, and purchased one of the first printers in 1990, primarily for rapid prototyping. Today, the Marshall team is using state-of-the-art 3-D printers that work with a variety of plastics and metals, including titanium, aluminum, nickel, and other alloys widely used in aerospace manufacturing.

The ability to print a replacement part or tool in orbit means NASA doesn’t have to send the parts, just the computer data file of the design, saving that mass for other important items that may be needed on a deep space mission. Proving this technology is also the next step toward manufacturing with resources found on planetary surfaces to build what humans need to survive there.

Engineers at Marshall are working on methods to bind or mold raw building materials out of regolith -- the soil or dirt found on planets, asteroids, or moons. The process would involve special mobile machines that work much like a 3-D printer, only they extrude materials made from mixing soil and a binder to “print" bricks, or even walls and other structures, to make houses for astronauts and equipment on another planet. These rovers could be controlled remotely from Earth or from space, so the shelters could be set up well in advance of a human setting foot on the surface.

An early prototype of such a machine is proving effective in building small structures on Earth out of sand. The next step is to make bricks and walls with simulated Mars regolith that has the same characteristics as real Martian dirt. With this technology under development, astronauts could arrive at new destinations and already have a home that is move-in ready.