A group of scientists from Okinawa Institute of Science and Technology Graduate University (OIST), Nagoya University, and the University of Tokyo decoded the first lingulid brachiopod genome, from Lingula anatina collected at Amami Island, Japan. The paper published in Nature Communications presents the results of their analysis of over 34,000 genes comprising the L. anatina genome and shows that despite Lingula's reputation as a "living fossil" its genome is actively evolving.

Lingulid brachiopods are regarded as one of the most primitive of brachiopods. Their shells do not have any locking mechanisms. These animals rely on complex musculature to move the valves.

Brachiopods are marine invertebrates with external shells and a stalk. They are often confused with molluscs; however, the resemblance is superficial. Unlike bivalves -- clams and mussels -- that have shells on the sides of their bodies, brachiopod shells are on the top and bottom. As a result, the plane of symmetry in a bivalve runs along the hinge; hence the two valves are mirror images of one another. In brachiopods the plane of symmetry is perpendicular to the hinge, so that the halves of the valves mirror each other.

The mysterious "living fossil" is shown. 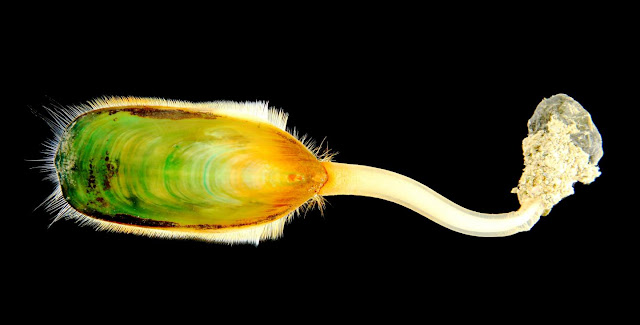 Brachiopods are one of the first known examples of animal biomineralisation -- a process whereby living organisms stiffen or harden tissues with minerals. The earliest discovered brachiopod fossils date to the early Cambrian period, approximately 520 million years ago. Brachiopods quickly spread all over the world and dominated the seas during the Paleozoic era (542-251 million years ago) and, by virtue of their mineralised shells, left an abundance of fossils.

Lingulid brachiopods had changed so little in appearance since the Silurian period (443-419 million years ago) that Darwin referred to them as "living fossils". This term often misleads people into believing that these animals do not evolve anymore, but the present study shows otherwise.

The evolutionary origin of brachiopods and their relations to other species are still unclear. For years, scientists have been debating the phylogenetic position of brachiopods and molluscs, as well as their affinities for other animals in the same group, the Lophotrochozoa, comprising segmented worms, clams, oysters, snails, squids, and so on. The phylogenetic analysis of the Lingula genome indicates that brachiopods are close relatives to molluscs, and more distant cousins to segmented worms; however, their relations to other lophotrochozoans still require further investigation.

"At the molecular level, brachiopods are very similar to molluscs. Both are protostomes -- their embryos form mouths first and anuses thereafter. However, brachiopod embryonic development is very different from that of molluscs: it resembles that of deuterostomes, in which embryos form anuses first and mouths second," says Yi-Jyun Luo, the first author of the paper, "The results of the Lingula genome project will help future research of these differences and the roles that specific genes play in development of various brachiopod body structures."

A "living fossil"? Not quite!

One would expect that "living fossils" would closely resemble their fossilised ancestors, not only in appearance but in genome as well. While that is close to true for coelacanths, other famous "living fossils", which have the slowest molecular evolutionary rate among vertebrates, the Lingula genome has been evolving rapidly, despite the lack of changes in appearance.

Shells of fossilised and living Lingula show considerable diversity in chemical structure. Analysis of the soft tissues of fossils also suggests morphological changes among lingulid brachiopods. The authors of the paper also found significant changes in the genomic structure and gene families, contradicting the idea of a genuine "living fossil". Interestingly, the Lingula genes associated with basic metabolism show the slowest evolutionary change among lophotrochozoans.

One of the great mysteries of animal evolution is that vertebrates and Lingula, although evolutionarily distant, both use calcium phosphate and collagen fibres for biomineralisation. However, genomic scale comparisons show that Lingula lacks genes for bone formation and has different types of collagen fibres. This study indicates that Lingula and bony vertebrates have evolved independently and employ different mechanisms for hard tissue formation. It is an interesting example of parallel evolution.

The Lingula genome decoding sheds some light on the evolutionary history of brachiopods and lophotrochozoans as well as the origin of biomineralisation. Prof. Noriyuki Satoh, the head of the OIST Marine Genomics Unit and the last author of the paper, said, "This is one step toward untangling the mysteries of animal evolution. The study highlights the fact that various animals have taken evolutionary paths independently from one another." He added, "Conserving the natural habitat for animal diversity is important. This research illustrates the well-nurtured tradition of zoological studies in Japan."

Contacts and sources:
Okinawa Institute of Science and Technology
on September 18, 2015