In 1952, the legendary British mathematician and cryptographer Alan Turing proposed a model, which assumes formation of complex patterns through chemical interaction of two diffusing reagents. Russian scientists managed to prove that the corneal surface nanopatterns in 23 insect orders completely fit into this model.

The work was done by a team working in the Institute of Protein Research of the Russian Academy of Sciences, (Pushchino, Russia) and the Department of Entomology at the Faculty of Biology of the Lomonosov Moscow State University. It was supervised by Professor Vladimir Katanaev, who also leads a lab in the University of Lausanne, Switzerland. Artem Blagodatskiy and Mikhail Kryuchkov performed the choice and preparation of insect corneal samples and analyzed the data. Yulia Lopatina from the Lomonosov Moscow State University played the role of expert entomologist, while Anton Sergeev performed the atomic force microscopy.

The diversity of corneal nanostructural patterns among arthropod groups: (AandB) Corneal nanostructures of Trichoptera. Merged as well as undersized nipples in an irregular nipple array of the Phryganeidaefamily (A) and maze-like nanocoating of the Limnephilidae family (B). (C) Clearly expressed parallel strands in a true spider. (D) Dimpled nanopattern of an earwig (Dermaptera). (E) Nipples merging into maze on stonefly (Plecoptera) corneae. (FandG) Merging of individual Dipteran nipples into parallel strands and mazes: full merging of nipples into strands and mazes on the entire corneal surface in Tabanidae (F); partial merging of nipples in the center of Tipulidae cornea into elongated protrusions and then complete fusion into an array of parallel strands near the ommatidial edge (G). (H) Merging of individual burrows and dimples into a maze-like structure on bumblebee (Apidae, Hymenoptera) corneae. All image dimensions are 5×5μm, except forH, which is 3×3μm. Surface height in nanometers is indicated by the color scale shown next to 2-D images.

The initial goal of the study was to characterize the antireflective three-dimensional nanopatterns covering insect eye cornea, with respect to the taxonomy of studied insects and to get insight into their possible evolution path.

The result was surprising as the pattern morphology did not correlate with insect position on the evolutionary tree. Instead, Russian scientists have characterized four main morphological corneal nanopatterns as well as transition forms between them, omnipresent among the insect class. Another finding was that all the possible forms of the patterns directly matched to the array of patterns predicted by the famous Turing reaction-diffusion model published in 1952, what Russian scientists confirmed not by mere observation, but by mathematical modeling as well. The model assumes formation of complex patterns through chemical interaction of two diffusing reagents.

The analysis of corneal surface nanopatterns in 23 insect orders has been performed by means of atomic force microscopy with resolution up to single nanometers.

This is an illustration of the research. 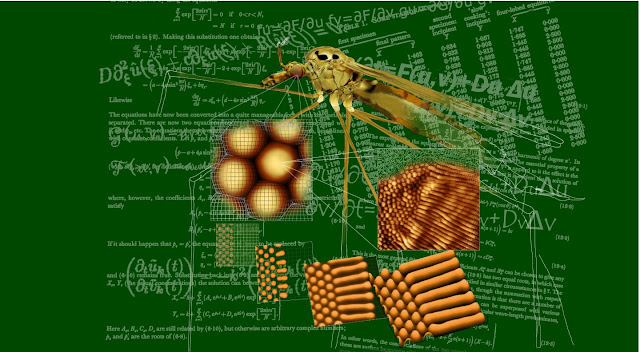 "This method allowed us to drastically expand the previously available data, acquired through scanning electron microscopy; it also made possible to characterize surface patterns directly, not based upon analysis of metal replicas. When possible, we always examined corneae belonging to distinct families of one order to get insight into intra-order pattern diversity", -- Artem Blagodatskiy says,

The main implication of the work is the understanding of the mechanisms underlying the formation of biological three-dimensional nano-patterns, demonstrating the first example of Turing reaction-diffusion model acting in the bio-nanoworld.

Interestingly, the Turing nanopatterning mechanism is common not only for the insect class, but also for spiders, scorpions and centipedes in other words - universal for arthropods. Due to the antireflective properties of insect corneal nanocoatings, the revealed mechanisms are paving the way for design of artificial antireflective nanosurfaces.

"A promising future development of the project is planned to be a genetic analysis of corneal nanopattern formation on platform of a well studied Drosophila melanogaster (fruitfly) model. The wild-type fruitflies possess a nipple array type nanocoating on their eyes", -- Artem Blagodatskiy summarized.

Different combinations of overexpressed and underexpressed proteins known to be responsible for corneal development in Drosophila may alter the nipple pattern to another pattern type and thus shed the light on chemical nature of compounds, forming the Turing-type structures upon insect eyes. Revealing of proteins and\or other agents responsible for nanopattern formation will be a direct clue to artificial design of nanocoatings with desired properties. Another direction of project development will be the comparison of antireflective features of different types of characterized nanocoatings.