Hubble Zeroes in on Shrapnel from an Exploded Star

NASA’s Hubble Space Telescope has unveiled in stunning detail a small section of the expanding remains of a massive star that exploded about 8,000 years ago.

Called the Veil Nebula, the debris is one of the best-known supernova remnants, deriving its name from its delicate, draped filamentary structures. The entire nebula is 110 light-years across, covering six full moons on the sky as seen from Earth, and resides about 2,100 light-years away in the constellation Cygnus, the Swan.

NASA's Hubble Space Telescope has unveiled in stunning detail a small section of the Veil Nebula - expanding remains of a massive star that exploded about 8,000 years ago. 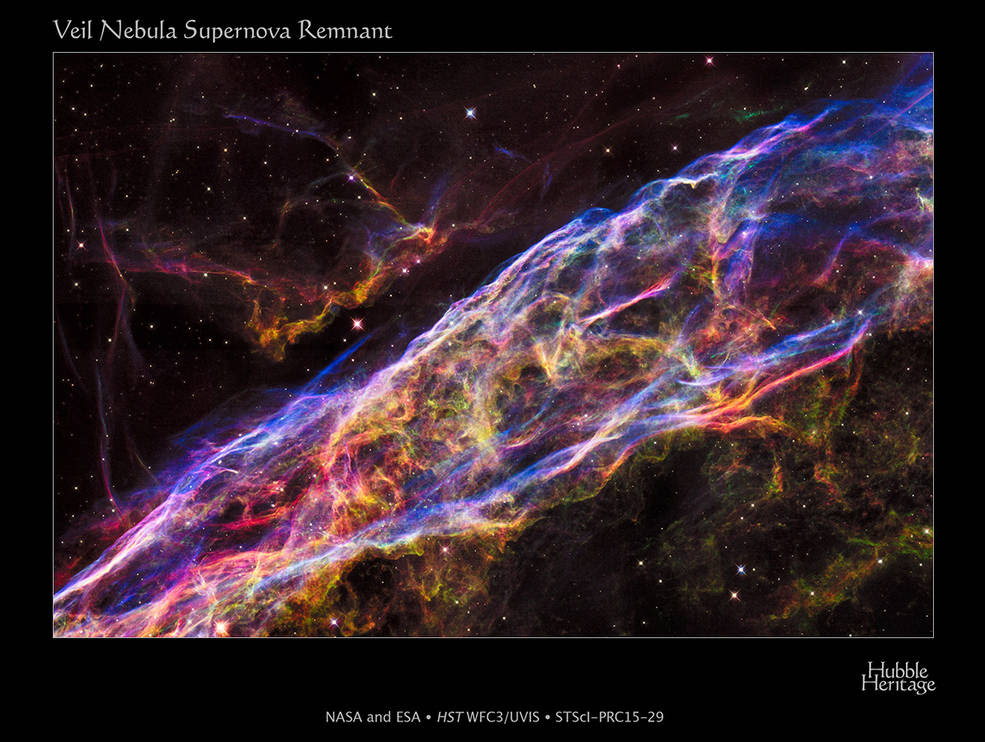 This view is a mosaic of six Hubble pictures of a small area roughly two light-years across, covering only a tiny fraction of the nebula’s vast structure.

This close-up look unveils wisps of gas, which are all that remain of what was once a star 20 times more massive than our sun. The fast-moving blast wave from the ancient explosion is plowing into a wall of cool, denser interstellar gas, emitting light. The nebula lies along the edge of a large bubble of low-density gas that was blown into space by the dying star prior to its self-detonation.

The image shows an incredible array of structures and detail from the collision between the blast wave and gas and dust that make up the cavity wall. The nebula resembles a crumpled bed sheet viewed from the side. The bright regions are where the shock wave is encountering relatively dense material or where the “bed sheet” ripples are viewed edge-on.

This 3-D visualization flies across a small portion of the Veil Nebula as photographed by the Hubble Space Telescope. This region is a small part of a huge expanding remnant from a star that exploded many thousands of years ago. Hubble resolves tangled rope-like filaments of glowing gases. The 3-D model has been created for illustrative purposes and shows that that the giant bubble of gas has a thin, rippled surface. It also highlights that the emission from different chemical elements arises from different layers of gas within the nebula. In the imagery, emission from hydrogen, sulfur, and oxygen are shown in red, green, and blue, respectively.

In this image, red corresponds to the glow of hydrogen; green from sulfur; and blue from oxygen. The bluish features, outlining the cavity wall, appear smooth and arched in comparison to the fluffy green and red structures. The red glow is from cooler gas that was excited by the shock collision at an earlier time and has subsequently diffused into a more chaotic structure.

A few thin, crisp-looking red filaments arise after gas is swept into the shock wave at speeds of nearly 1 million miles an hour, so fast that it could travel from Earth to the moon in 15 minutes.

Astronomers are comparing these new images to ones taken by Hubble in 1997. This comparison allows scientists to study how the nebula has expanded since it was photographed over 18 years ago.

The supernova that created the Veil Nebula would have been briefly visible to our very distant ancestors about 8,000 years ago as a bright “new star” in the northern sky.

This video opens with a backyard view of the nighttime sky centered on the constellation Cygnus, the Swan. We zoom into a vast donut-shaped feature called the Veil Nebula. It is the tattered expanding bubble of debris from a star that exploded about 8,000 years ago. The bubble has expanded to a diameter of roughly 110 light-years. Our zoom continues down to a two-light-year-wide segment of the nebula as photographed by the Hubble Space Telescope. Hubble resolves tangled rope-like filaments of glowing gases.

The Hubble Space Telescope is a project of international cooperation between NASA and the European Space Agency. NASA's Goddard Space Flight Center in Greenbelt, Maryland, manages the telescope. The Space Telescope Science Institute (STScI) in Baltimore, Maryland, conducts Hubble science operations. STScI is operated for NASA by the Association of Universities for Research in Astronomy, in Washington.