How Crew Survived 1813 Shipwreck in Alaska Detailed by Archaeologists

Working closely with the U.S. Forest Service and the Sitka Tribe of Alaska, an international team of researchers funded by the National Science Foundation has begun to piece together an archaeological and historical narrative of how the crew of the wrecked 19th century Russian-American Company sailing ship Neva survived the harsh subarctic winter.

"The items left behind by survivors provide a unique snapshot-in-time for January 1813, and might help us to understand the adaptations that allowed them to await rescue in a frigid, unfamiliar environment for almost a month," said Dave McMahan of the Sitka Historical Society.

Researchers discovered a brass strap buckle during the excavation. 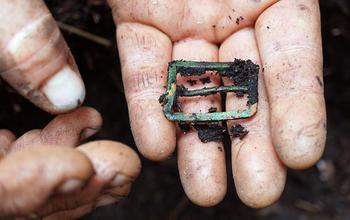 McMahan is the principal investigator for the NSF award, which was made by the Arctic Sciences Section in NSF's Division of Polar Programs.

The wreck of the frigate Neva, which occurred near the city of Sitka, has been surrounded by stories and legends for two centuries. Although survivors eventually were rescued and taken to Sitka, few accounts of their experience were collected or published. No official records relating to the wreck and its aftermath have been discovered.

The researchers are seeking to verify the wreck location and confirm the site of a survivor camp. They also hope that Tlingit oral history will add to the story and help to place the wreck in a broader context.

The NSF-funded work stems from a 2012 survey project by the U.S. Forest Service, the Alaska Office of History and Archaeology and the Sitka Historical Society. At that time, archaeologists discovered caches of Russian axes at a location they predicted to be the survivor camp.

The archaeological team--which includes members from Russia, the U.S. and Canada--believes articles they found over the past two years represent the everyday tools used by 26 shipwrecked members of the Neva's crew. Those crewmembers survived for almost a month in the winter of 1813 by foraging and gathering materials that washed ashore from the wreck.

In July, researchers discovered at the campsite a series of hearths with early 19th century artifacts such as gun flints, musket balls, pieces of modified sheet copper, iron and copper spikes, a Russian axe, and a fishhook fashioned from copper. Well-preserved food middens--or refuse heaps--will allow reconstruction of the foraging strategies the sailors used to survive.

Gun flints found at the site appeared to have been used by survivors to used start fires, by striking them against steel. Historical accounts credit a firearm used in this manner with helping save the crew from hypothermia. Physical evidence indicates the survivors tried to whittle down musket balls to fit a smaller caliber weapon, such as a flintlock--most likely the same firearm mentioned in the historical accounts. Some of the copper spikes recovered by archaeologists had been broken through shear stress, such as a wreck would produce. The researchers believe one copper or brass artifact is part of a set of a navigator's dividers, saved by a crewman as the ship violently broke apart over rocks. 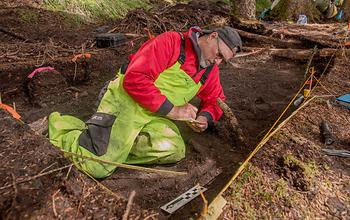 The nature of the artifacts seems to strongly indicate that survivors of the shipwreck were active in ensuring their own survival. They modified wreckage in desperation, but with ingenuity.

"Collectively, the artifacts reflect improvisation in a survival situation, and do not include ceramics, glass and other materials that would be associated with a settlement," McMahan said.

Because the wreck occurred in an area of profound cultural significance to the Tlingit people of Sitka, the team did not search for--nor did it inadvertently discover--any graves of those who perished.

Before its Arctic demise, the Neva was famous as one of two vessels that completed the first Russian circumnavigation of the globe from 1803-1807. The ship later fought in the 1804 Battle of Sitka, a pivotal engagement in the Russian struggle for control over what was then the Alaska territory. After 1808, the ship was in the exclusive service of the Russian-American Company, which Tsar Paul I chartered to establish new settlements in Russian America, primarily Alaska, and carry out a program of colonization.

The Neva came to grief after leaving the Siberian port of Okhotsk for Sitka in late August of 1812, McMahan said. During a grueling three-month voyage, those on board endured water shortages and sickness. Fierce storms damaged the ship's rigging. In mid-November the weakened sailors finally found shelter in Alaska's Prince William Sound and, after much debate, made a desperate attempt to reach Sitka.

In favorable weather, they almost reached their destination before wrecking off Kruzof Island. The wreck killed 32; another 15 had already died at sea. Of the 28 who made it to shore, 26 survived for almost a month before their rescue.

McMahan said the team hopes to continue the investigation next year with a smaller field effort at the camp. The terrestrial archaeology is only one component of research, which also includes underwater work and archival research, he said. Thick kelp that obscured the sea floor and interfered with sonar hampered an underwater survey this season. McMahan and Evguenia Anitchenko, the project's archival coordinator, conducted research in St. Petersburg last September, and plan to do the same later this year in London, where the Neva was built.

In an effort to put together the most complete story possible, McMahan is also encouraging anyone with information or oral history pertaining to the Neva to contact him through the Sitka Historical Society. "One goal of the research is to replace some of the myths and 'lore of the sea' with scientific findings," he said.

Longer-range plans for the project include a "virtual museum" with 3-D scans of artifacts, along with a short film that can be used in local educational curricula.

In addition to McMahan, U.S. team members include co-principal-investigator Timothy Dilliplane, an assistant professor at the Massachusetts Maritime Academy and Daniel Thompson, an Alaskan historical archaeologist. Sitka archaeologist Sue Thorsen will join the team for future work. Two of the team members--Anichtchenko , an Anchorage maritime specialist and doctoral candidate at the University of Southampton in the United Kingdom and videographer Gleb Mikhalev--are U.S. citizens who were born in Russia.

Other team members include Russians Artur Kharinsky, a professor at Irkutsk State Technical University and Yury Likhin, a scientific adviser with the Taltsy Museum of Wooden Architecture and Ethnography in Irkutsk; and Canadians John Pollack and Sean Adams, archaeological mapping specialists affiliated with the Institute of Nautical Archaeology.

Other participating and consulting organizations in the project include the U.S. Forest Service, the Sitka Tribe of Alaska, the Alaska Office of History and Archaeology, the Sitka Historical Society, Sealaska Corporation, and Sitka National Historical Park.