Observations using NASA's Chandra X-ray Observatory revealed that the unusually large magnetosphere around an O-type star called NGC 1624-2 contains a raging storm of extreme stellar winds and dense plasma that gobbles up X-rays before they can escape into space.

Findings from a team of researchers led by Florida Institute of Technology Assistant Professor Véronique Petit may help scientists better understand the lifecycle of certain massive stars, which are essential for creating metals needed for the formation of other stars and planets.

The magnetic field of the O-type star called NGC 1624-2 is unusually large for its class. 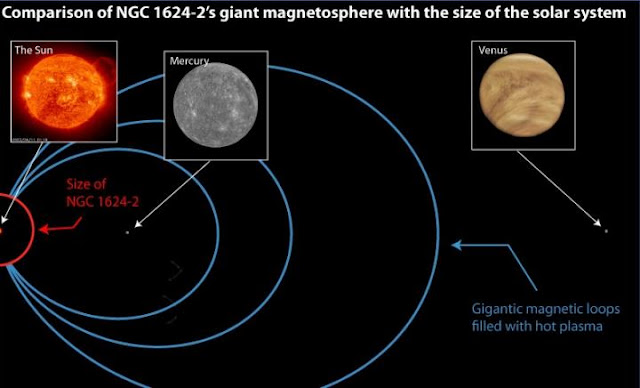 Credit:  SOHO/[instrument] Consortium. SOHO is a project of international cooperation between ESA and NASA.

The findings will be published Sept. 23 in the journal Monthly Notices of the Royal Astronomical Society from Oxford University Press.

The massive O-type star - the hottest and brightest type of star in the universe - has the largest magnetosphere known in its class. Petit found NGC 1624-2's magnetic field traps gas trying to escape from the star and those gases absorb their own X-rays. The star's powerful stellar winds are three to five times faster and at least 100,000 times denser than our Sun's solar wind. Those winds grapple violently with the magnetic field and the trapped particles create the star's huge aura of hot, very dense plasma.

"The magnetic field isn't letting its stellar wind get away from the star, so you get these big flows that are forced to collide head on at the magnetic equator, creating gas shock-heated to 10 million Kelvin and plenty of X-rays," said Petit, who was part of a team of scientists that discovered the star in 2012. "But the magnetosphere is so large that nearly 80 percent of these X-rays get absorbed before being able to escape into free space and reach the Chandra telescope."

Only one in 10 massive stars have a magnetic field. Unlike smaller stars like our sun that generate magnetism with an internal dynamo, magnetic fields in massive stars are "fossils" left over from some event in its early life, perhaps from a collision with another star.

Petit and her team, including Florida Tech graduate student Rebecca MacInnis, will know even more about the NGC 1624-2 in October after getting data back from the Hubble Space Telescope that will explore the dynamics of its trapped wind.