An international team of astronomers has discovered a gargantuan galaxy cluster with a core bursting with new stars - an incredibly rare find. The discovery, made with the help of the NASA/ESA Hubble Space Telescope, is the first to show that gigantic galaxies at the centres of massive clusters can grow significantly by feeding off gas stolen from other galaxies.

This image, using data from Spitzer and the Hubble Space Telescope, shows the galaxy cluster SpARCS1049. 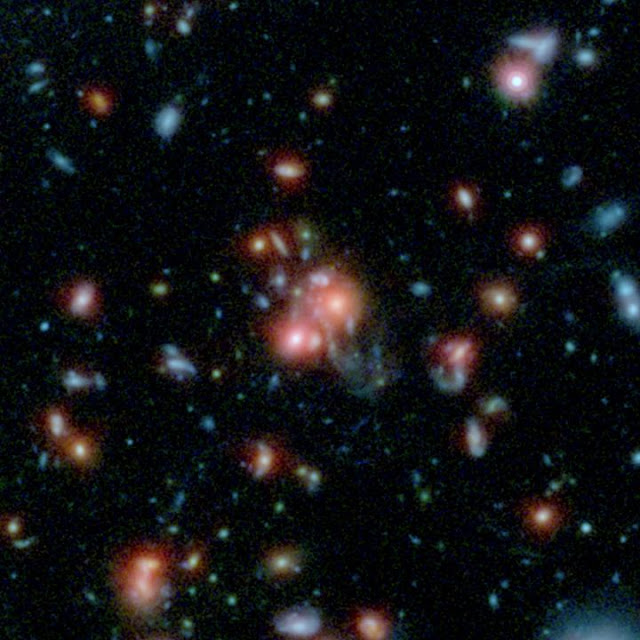 Galaxy clusters are vast families of galaxies bound together by gravity. Our own galaxy, the Milky Way resides within a small galaxy group known as the Local Group, which itself is a member of the massive Laniakea supercluster.

Galaxies at the centres of clusters are usually made of stellar fossils - old, red or dead stars. However, astronomers have now discovered a giant galaxy at the heart of a cluster named SpARCS1049+56 that seems to be bucking the trend, instead forming new stars at an incredible rate.

"We think the giant galaxy at the centre of this cluster is furiously making new stars after merging with a smaller galaxy," explained Tracy Webb of McGill University, Montreal, Canada, lead author of a new paper accepted for publication in The Astrophysical Journal.

The SpARCS1049+56 cluster is so far away that its light took 9.8 billion years to reach us. It houses at least 27 galaxies and has a combined mass equal to 400 trillion Suns. It is a truly unique cluster in one aspect - its vibrant heart of new stars. The cluster's brightest galaxy [1] is rapidly spitting out 800 new stars per year. The Milky Way forms two stars per year at most!

"The Spitzer data showed us a truly enormous amount of star formation in the heart of this cluster, something that has rarely been seen before, and certainly not in a cluster this distant," commented co-author Adam Muzzin of the University of Cambridge, UK.

Spitzer picks up infrared light, so it can detect the warm glow of hidden, dusty regions of starbirth. Follow-up studies with Hubble in visible light helped to pinpoint what was fuelling the new star formation. It appears that a smaller galaxy has recently merged with the monster in the middle of the cluster, lending its gas to the larger galaxy and igniting a furious episode of new starbirth.

"Building on our other observations, we used Hubble to explore the galaxy in depth - and we weren't disappointed," added Muzzin. "Hubble found a trainwreck of a merger at the centre of this cluster. We detected features that looked like beads on a string."

Beads on a string (heic1414 - https://www.spacetelescope.org/news/heic1414/) are telltale signs of something known as a wet merger. Wet mergers occur when gas-rich galaxies collide - this gas is converted quickly into new stars.

The new discovery is one of the first known cases of a wet merger at the core of a galaxy cluster. Hubble had previously discovered another closer galaxy cluster containing a wet merger, but it was not forming stars as vigorously. Other galaxy clusters grow in mass through dry mergers [2], or by siphoning gas towards their centres. For example, the mega galaxy cluster known as the Phoenix Cluster grows in size by sipping off gas that flows into its centre.

The astronomers now aim to explore how common this type of growth mechanism is in galaxy clusters. Are there other "messy eaters" out there similar to SpARCS1049+56, which also munch on gas-rich galaxies? SpARCS1049+56 may be an outlier - or it may represent an early time in our Universe when messy eating was the norm.

[1] At the core of most galaxy clusters lies a hulking galaxy called the brightest cluster galaxy, or BCG. This newly discovered starbursting galaxy is the BCG in SpARCS1049+56.

[2] Dry mergers involve the coming together of two galaxies lacking in gas. The two just mix their existing stars, rather than causing the birth of any new ones.
on September 11, 2015