Flood risk for New York City and the New Jersey coast has increased significantly during the last 1,000 years due to hurricanes and accompanying storm surges, according to a study by Penn State University, Rutgers University, Massachusetts Institute of Technology, Princeton University and Tufts University.

For the first time, climate researchers compared both sea-level rise rates and storm surge heights in prehistoric and modern eras and found that the combined increases of each have raised the likelihood of a devastating 500-year flood occurring as often as every 25 years.

Flood heights increased 1.2 meters from the prehistoric era to the modern era, mainly due to rising sea level, researchers found. 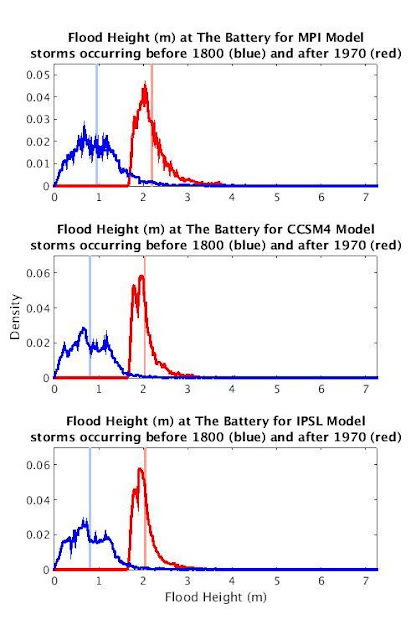 "A storm that occurred once in seven generations is now occurring twice in a generation," said Benjamin Horton, a Rutgers marine and coastal sciences professor. Horton also is the principal investigator on the National Oceanic and Atmospheric Administration and National Science Foundation grants funding the research.

The study, "Increased Threat of Tropical Cyclones and Coastal Flooding During the Anthropogenic Era," was published today in PNAS (Proceedings of the National Academy of Sciences). This study is unique because researchers combined sea-level records, hurricane and storm surge models to look at flooding in the New York City region in the two time periods - prehistoric (pre-anthropogenic, A.D. 850 to 1800) and modern (anthropogenic, 1970 - 2005).

Flooding heights increased 1.2 meters from the prehistoric era to the modern era, researchers found. "This is mainly due to the rising sea level. Sea levels have been rising in the modern era because of human activity," Horton said. "Sea-level rise between hurricanes raises the 'baseline' water level and makes flooding more likely."

Flood heights increased 1.2 meters from the prehistoric era to the modern era, mainly due to rising sea level, researchers found.

In the new study, researchers provided a continuous sea-level reconstruction since A.D 850. They showed that since the late 19th century sea level has risen at its steepest rate for more than 1,000 years. What does that mean for residents along the New York/New Jersey coast? "An extra 100,000 people flooded in the region during Hurricane Sandy who would not have flooded if sea level had not been rising," Horton said of the 2012 storm.

Climate researchers compared sea-level rise rates and storm surge heights in prehistoric and modern eras and found that the combined increases of each have dramatically increased the likelihood of major storms that cause excessive flooding. Above, Hurricane Sandy damage in Lavallette, N.J. 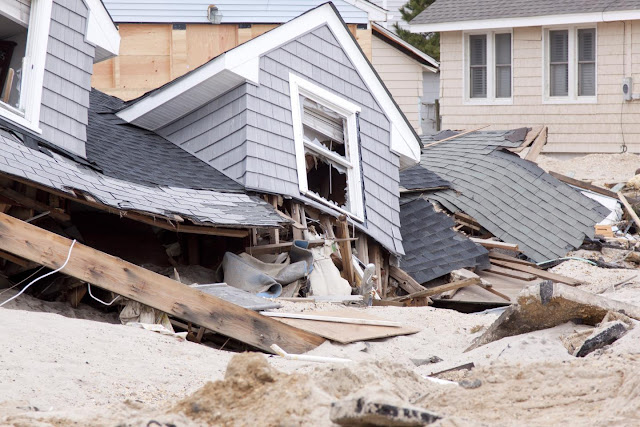 Climate scientists have established that two types of storms cause the most damage - big, slow-moving storms and smaller but higher-intensity storms - and this study found that both have significantly increased in the modern era. "What we do know is that as sea level rise accelerates into the future, we are going to have more frequent flooding," Horton said.

To reconstruct sea level, the research team used microfossils called foraminifera preserved in sediment cores from coastal salt marshes in New Jersey. The age of these cores was estimated using radiocarbon dating and several other complementary techniques. "Every inch deeper in a core takes you further back in time," Horton explained. "We can stretch this technique back hundreds of years and thousands of years."

Researchers have established that the drivers of climate changes in the prehistoric era were natural causes, while in the later period human actions have driven increases in sea-level heights and other climate measures that affect storm activity.

The paper found that flood heights have increased during the modern era not only because of relative sea-level rise but also due to changing hurricane characteristics, leading to an increased risk of coastal inundation. "The increasing flood risk projected for the coming decades presents a hazard to New York City's and New Jersey's intense concentrations of population, economic production, and static infrastructure, and indicates the necessity for risk management solutions," Horton said.

As sea levels continue to rise at an accelerated pace, the risk of coastal flooding will rise as well. That's why the next phase of this research, led by doctoral candidate Andra Reed at Penn State University, will use the data gathered to make models to predict future sea levels and hurricane activity and when major storms like Hurricane Sandy will strike.

"We need to do this so we can provide better information to residents of New York and New Jersey and to policymakers, insurance industries and the states to prepare for how often an event as severe as Hurricane Sandy will occur," Horton said.