Humans are extremely choosy when it comes to mating, only settling down and having kids after a long screening process involving nervous flirtations, set-ups by friends, online matchmaking sites, awkward dates, humiliating rejections, hasty retreats and the occasional lucky strike. In the end, we "fall in love" and "live happily ever after." But evolution is an unforgiving force - isn't this choosiness rather a costly waste of time and energy when we should just be "going forth and multiplying?" What, if anything, is the evolutionary point of it all? A new study may have the answer.

Doing a cost/benefit analysis of love is a challenging business, with many potential confounds, and - in the case of humans - some ethical limitations on doing experiments. A new study publishing on September 14th in the Open Access journal PLOS Biology by Malika Ihle, Bart Kempenaers, and Wolfgang Forstmeier from the Max Planck Institute for Ornithology, Seewiesen, Germany, describes an elegant experiment designed to tease apart the consequences of mate choice.

The authors took advantage of the fact that the zebra finch shares many characteristics with humans, mating monogamously for life, and sharing the burden of parental care. Female finches choose mates in a way that is specific to the individual, and there is little consensus among females as to who the cutest male is. 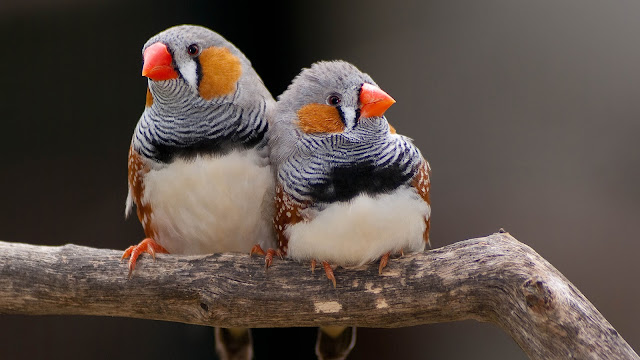 Using a population of 160 birds, the authors set up a speed-dating session, leaving groups of 20 females to choose freely between 20 males. Once the birds had paired off, half of the couples were allowed to go off into a life of wedded bliss. For the other half, however, the authors intervened like overbearing Victorian parents, splitting up the happy pair, and forcibly pairing them with other broken-hearted individuals.

Bird couples, whether happy or somewhat disgruntled, were then left to breed in aviaries, and the authors assessed couples' behavior and the number and paternity of dead embryos, dead chicks and surviving offspring.

Strikingly, the final number of surviving chicks was 37% higher for individuals in chosen pairs than those in non-chosen pairs. The nests of non-chosen pairs had almost three times as many unfertilized eggs as the chosen ones, a greater number of eggs were either buried or lost, and markedly more chicks died after hatching. Most deaths occurred within the chicks' first 48 hours, a critical period for parental care during which non-chosen fathers were markedly less diligent in their nest-care duties.

Watching the couples' courtship showed some noticeable differences - although non-chosen males paid the same amount of attention to their mates as the chosen ones did, the non-chosen females were far less receptive to their advances, and tended to copulate less often. An analysis of harmonious behavior revealed that non-chosen couples were generally significantly less lovey-dovey than the chosen ones. There was also a higher level of infidelity in birds from non-chosen pairs - interestingly the straying of male birds increased as time went by while females roamed less.

Overall the authors conclude that birds vary rather idiosyncratically in their tastes, and choose mates on the basis that they find them stimulating in some way that isn't necessarily obvious to an outside observer. This stimulation "turns on" the females to increase the likelihood of successful copulation and encourages paternal commitment for the time needed to raise young; together these maximize the couple's likelihood of perpetuating their genes through their thriving offspring.

Sounds familiar? This is presumably what the human dating game is about, the need perhaps exacerbated by the extended phase of dependence during which our children need parental support. Indeed, these authors' results are consistent with some studies on the differences between love-based and arranged marriages in human society.