Earth's gravity has influenced the orientation of thousands of faults that form in the lunar surface as the moon shrinks, according to new results from NASA's Lunar Reconnaissance Orbiter (LRO) spacecraft.

In August, 2010, researchers using images from LRO's Narrow Angle Camera (NAC) reported the discovery of 14 cliffs known as "lobate scarps" on the moon's surface, in addition to about 70 previously known from the limited high-resolution Apollo Panoramic Camera photographs. Due largely to their random distribution across the surface, the science team concluded that the moon is shrinking.

The gravitational forces the moon and sun exert are responsible for Earth's rising and falling tides. Earth's gravity also exerts forces on the Moon in the form of solid body tides that distort its shape. The Moon is slowly receding away from Earth and forces build as the moon's tidal distortion diminishes with distance and its rotation period slows with time. These tidal forces combined with the shrinking of the moon from cooling of its interior have influenced the pattern of orientations in the network of young fault scarps. 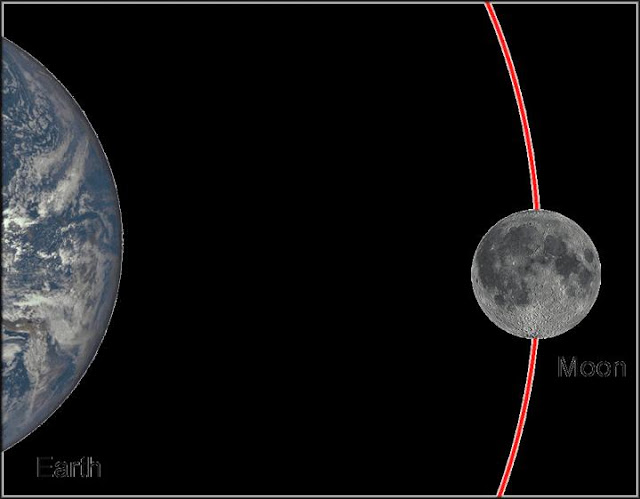 These small faults are typically less than 6.2 miles (10 kilometers) long and only tens of yards or meters high. They are most likely formed by global contraction resulting from cooling of the moon's still hot interior. As the interior cools and portions of the liquid outer core solidify, the volume decreases; thus the moon shrinks and the solid crust buckles.

Now, after more than six years in orbit, the Lunar Reconnaissance Orbiter Camera (LROC) has imaged nearly three-fourths of the lunar surface at high resolution, allowing the discovery of over 3,000 more of these features. These globally distributed faults have emerged as the most common tectonic landform on the moon. An analysis of the orientations of these small scarps yielded a surprising result: the faults created as the moon shrinks are being influenced by an unexpected source--gravitational tidal forces from Earth.

Global contraction alone should generate an array of thrust faults with no particular pattern in the orientations of the faults, because the contracting forces have equal magnitude in all directions. "This is not what we found," says Smithsonian senior scientist Thomas Watters of the National Air and Space Museum in Washington. "There is a pattern in the orientations of the thousands of faults and it suggests something else is influencing their formation, something that's also acting on a global scale -- 'massaging' and realigning them." Watters is lead author of the paper describing this research published in the October issue of the journal Geology.

"The discovery of so many previously undetected tectonic features as our LROC high-resolution image coverage continues to grow is truly remarkable," said Mark Robinson of Arizona State University, coauthor and LROC principal investigator. "Early on in the mission we suspected that tidal forces played a role in the formation of tectonic features, but we did not have enough coverage to make any conclusive statements. Now that we have NAC images with appropriate lighting for more than half of the moon, structural patterns are starting to come into focus."

The fault scarps are very young - so young that they are likely still actively forming today. The team's modeling shows that the peak stresses are reached when the moon is farthest from Earth in its orbit (at apogee). If the faults are still active, the occurrence of shallow moonquakes related to slip events on the faults may be most frequent when the moon is at apogee. This hypothesis can be tested with a long-lived lunar seismic network.

"With LRO we've been able to study the moon globally in detail not yet possible with any other body in the solar system beyond Earth, and the LRO data set enables us to tease out subtle but important processes that would otherwise remain hidden," said John Keller, LRO Project Scientist at NASA's Goddard Space Flight Center, Greenbelt, Maryland.

Launched on June 18, 2009, LRO has collected a treasure trove of data with its seven powerful instruments, making an invaluable contribution to our knowledge about the moon. LRO is managed by NASA's Goddard Space Flight Center in Greenbelt, Maryland, under the Discovery Program, managed by NASA's Marshall Space Flight Center in Huntsville for the Science Mission Directorate at NASA Headquarters in Washington, DC.