The light that typically floods homes, offices and public buildings could provide something more than illumination. Scientists at Disney Research and ETH Zurich have demonstrated that light could be a medium for light bulbs to communicate - with each other, with objects and with the Internet.

Transmitting signals via light is nothing new; Alexander Graham Bell showed that speech could be conveyed with light in the 1880s, years before speech was first transmitted via radio. The Disney researchers, however, have created networking technology that makes it possible for LED lights not only to communicate with each other, but to do so in a way that is compatible with the Internet and its technical protocols.

Stefan Mangold, who heads Disney Research's wireless research group, says these advances could give Visible Light Communication (VLC) an important role in the growing Internet of Things - the idea that objects can communicate with each other and share information to create smart environments.

"Communication with light enables a true Internet of Things as consumer devices that are equipped with LEDs but not radio links could be transformed into interactive communication nodes," Mangold said. "We're not just talking about sensors, smartphones and appliances. This easily could include toys that have LEDs, creating an Internet of Toys in which toys can be accessed, monitored and acted on remotely."

Mangold and his colleagues presented their findings Sept. 11 at VLCS '15, the ACM Workshop on Visible Light Communication Systems in Paris, France.

The VLC network the researchers used off-the-shelf commercial LED light bulbs that they then modified so that they could send and receive visible light signals. These modifications included a System-on-a-Chip running the Linux operating system, a VLC controller module with the protocol software and an additional power supply for the added electronics. 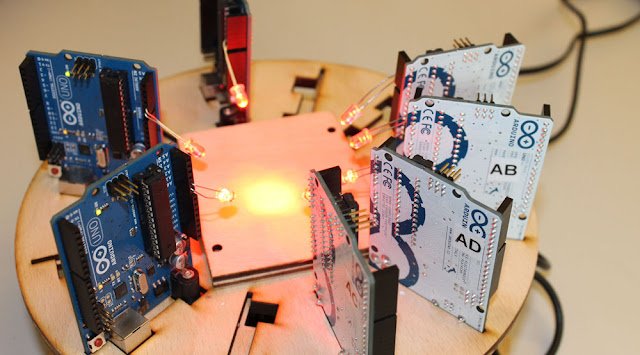 The researchers created software that makes the signals transmitted through this hardware compatible with Internet protocols. They were thus able to create networks with a throughput of up to 1 kilobit per second. These VLC-enabled bulbs could be used to broadcast beacons making it possible to detect the location of objects, linked into a network to route signal traffic or could be used to communicate with objects.

"The ubiquitous presence of LED-based light bulbs that can be enhanced with VLC functionality, and the availability of LED-equipped devices, unleashes a wide range of opportunities and applications," Mangold said.
Thier paper explores how the IP stack and other networking protocols can be hosted on Linux-based VLC devices. The VLC link layer for Linux consists of a VLC network driver module on top of a previously developed VLC Medium Access Control (MAC) and Physical (PHY) layers. The network driver provides the necessary interfaces to couple the IP networking protocols and the VLC layers. Performance and interaction between network driver and the existing MAC and PHY layers are analyzed and evaluated for di fferent networking topologies and scenarios. The evaluation results suggest that the selected IP stack and the proposed VLC protocols are flexible enough to inter-operate.