Portion of the world topographic map, highlighting the continental China and its adjacent land and seas (Google Map, 2015) to illustrate: (1) the Chinese continental shelf (basement of the East and South China Seas) to be of exotic origin; (2) arrival of the buoyant and unsubductable oceanic plateau or micro-continent at the trench jammed the trench at ~ 100 Ma; (3) the jammed trench location is shown in red dashed curve along the southeast coast of continental China although it is unclear in the north as indicated by the dashed light blue curve with question marks; (4) The yellow "drop" dots are granitoid sample locations with ages in the literature. The thick dashed purple line labeled E-W GGL approximates the East-West Great Gradient Line topographically separating the plateau to the west from the low-land hilly plain to the east. 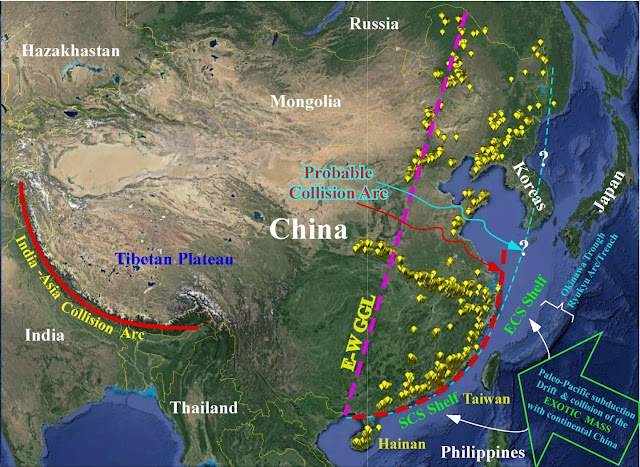 This exotic terrane of a sizeable mass with large compositional buoyancy could be either an oceanic plateau or a micro continent, which was transported by, or along with, the paleo-Pacific plate moving in the course of NW direction and subducting beneath the eastern margin of the continental China in the Mesozoic, responsible for the granitoids with emplacement ages of ~ 190 Ma to ~ 88 Ma.

The termination of the granitoid magmatism throughout the vast region at ~ 88 Ma manifests the likelihood of subduction cessation at this time or more likely shortly beforehand, probably at ~ 100 Ma. Subduction stops only if the trench is jammed by a sizable terrane that is compositionally buoyant and physically unsubductable. The basement of the Chinese continental shelf is understood to be such an unsubductable mass of either an oceanic plateau or micro continent as said above that collided with the eastern margin of the continental China and jammed the trench at ~ 100 Ma.

The trench jam at ~ 100 Ma led to the Pacific plate to change its course of motion from NW to NNW and to subduct beneath the predecessors of the Kamchatka and western Aleutian trenches as manifested by the age progressive Emperor Seamount Chain of the Hawaiian hotspot origin. This Pacific plate re-orientation produced a transform boundary between the NNW moving Pacific plate and the newly accreted eastern Asian continental plate, which explains the ~ 40 Myrs' time gap of subduction related magmatism in the greater western Pacific region before the present-day western Pacific subduction began at ~ 50 Ma. Because of the large compositional contrast across this transform boundary, it may have evolved into a trench with oblique subduction until ~ 43 Ma when the Pacific plate changed its course again back to the NW direction as manifested by the ~ 43 Ma kink and age progressive Hawaiian Seamount Chain of the Hawaiian hotspot origin.

The locus (or "suture") of the jammed trench at 100 Ma is predicted to locate on the Chinese continental shelf in the vicinity of, and parallel to, the Southeast coastal line (red dashed curve in Fig. 1). The curved arc-shape of the coastal line is inherited from the pre-100 Ma arc-shaped trench, which is similar in both curvature and size to the India-Asia collision arc (red solid curve in Fig. 1). To locate the locus in the northern section in the East China Sea and Yellow Sea is not straightforward because of the recent (< 20 Ma) tectonic re-organization associated with the opening of the Sea of Japan (see the light blue dashed line with question marks in Fig. 1).

The eastern continental China in the Mesozoic can be interpreted as an active continental margin, but NOT an Andean-Type margin as treated by many. This is because the granitoids do not define "magmatic arcs" at any given time, but distribute randomly in space and time in a wide zone in excess of > 1000 km. This observation indicates the likelihood of the presence of a stagnant paleo-Pacific slab in the mantle transition-zone beneath the region as is the case in the Cenozoic, which is seismically observed at present. The stagnant slab under heating by the ambience above and below caused the slab dehydration.

This dehydration caused a sequence of processes of geodynamic and geological significance. The released water facilitated the formation of hydrous melt within and above the transition zone, which percolated through and metasomatized the upper mantle, weakened the base of the lithosphere and transformed it into asthenosphere, hence having thinned lithosphere in the Mesozoic, accompanied by melting of the being-converted "lithospheric material" to produce basaltic melt as the heat source for crustal melting and the granitoid magmatism. Such within plate magmatism was ultimately triggered by subduction and subducted slabs, and can be readily understood as a special (vs. plate boundary zone) consequence of plate tectonics.

This new understanding on the origin of the Chinese continental shelf introduces an innovative hypothesis for consideration and testing. Basement penetration drilling on ideal sites of the shelf in collaboration with industries and IODP is expected to offer the most effective testing towards a genuine understanding of the tectonic evolution of the greater western Pacific since the Mesozoic in a global tectonic context.

This work was supported by Durham University in the UK, Chinese NSF grants (41130314, 91014003), Chinese Academy of Sciences Innovation grant (Y42217101L), grants from Chinese National Oceanography Laboratory in Qingdao, and from regional and local authorities (Shandong Province and City of Qingdao).