University of Virginia School of Medicine researchers have discovered a new strategy for attacking cancer cells that could fundamentally alter the way doctors treat and prevent the deadly disease. By more selectively targeting cancer cells, this method offers a strategy to reduce the length of and physical toll associated with current treatments.

“We think we have a way not only to more specifically target cancer cells, but a way that could become a frontline treatment for women who have cancers of many types and want to preserve fertility,” said reproduction researcher John Herr of U.Va.’s Department of Cell Biology. 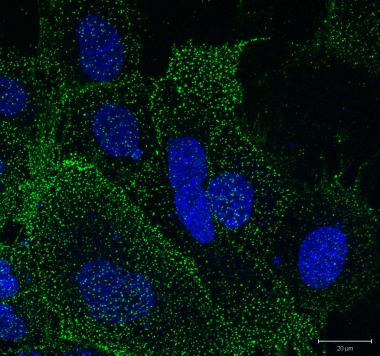 Herr and his research partner, Department of Obstetrics and Gynecology biologist Eusebio Pires, both specialize in germ cells – the reproductive cells that make up sperm and eggs. While researching new methods of contraception, Pires and Herr discovered a surprising link between developing egg cells and tumors. That link may allow doctors to use antibodies to deliver medication directly to tumors while sparing healthy tissue.

At the time, Herr and Pires were studying a protein called SAS1B that is typically only on the surface of developing and mature egg cells.

“Except for the small group of growing eggs in the ovary, the SAS1B protein is virtually absent in other tissues in the body,” Pires said. “So SAS1B has the promising features of a candidate contraceptive target.”

The restriction of SAS1B to growing eggs suggests strategies for developing improved female contraceptives that selectively target only the pool of growing eggs, potentially reducing unwanted side effects of current steroidal contraceptives.

Although the team originally focused on SAS1B because of its possible use in contraception, a single piece of data in the National Cancer Institutes’ GenBank database, showing expression of SAS1B in a uterine cancer, led their team to begin a search for it on the surface of various cancer types. So far, they have found SAS1B expressed in breast, melanoma, uterine, renal, ovarian, head and neck, and pancreatic cancers. There is also evidence to suggest that it appears in bladder cancers.

“The research opens a new field of enquiry, termed cancer-oocyte neoantigens, and reveals a previously little know fundamental aspect of cancer – that many types of cancer, when they dysregulate or go awry, revert back and take on features of the egg, the original cell from which all the tissues in the body derive,” Herr said.

He and Pires have found a way to exploit this fundamental insight by developing a method for delivering medication using the SAS1B protein as a target.

“You add a SAS1B-targeted antibody with a drug on it, and within 15 minutes of contacting the cancer cells, the antibody binds at the cell surface and the antibody-SAS1B complexes begin the internalization process,” Herr said.

After about an hour, the antibody-SAS1B complexes reach compartments inside the cell and release their toxic drug payload, triggering changes leading to cell death within a few days.

This kind of targeted drug delivery could mean a dramatic reduction in the difficult side-effects of traditional cancer treatment such as hair loss, nausea, anemia and neuropathy. Both women and men can use the treatment, which is predicted to dramatically limit unwanted side effects on healthy normal cells. For female cancer patients especially, a drug that doesn’t touch their body’s reserve of quiescent eggs could be a huge breakthrough.

While the monoclonal antibodies would have to attack the pool of growing egg cells in addition to the SAS1B positive cancer cells, the ovaries’ supply of dormant eggs would remain healthy and untouched by the treatment. This means normal ovulation could begin again once treatment is complete and oocytes are again recruited to develop and ovulate; a process anticipated to take approximately 200 days.

In addition to treating cancer, these selective antibodies could also lead to a new method for early cancer detection and prevention. Pires explained that the research team is developing a way to find tiny amounts of free-circulating SAS1B proteins in the body.

“It could be a valuable discovery in terms of prerequisite testing to identify those patients who have tumors making SAS1B,” he said.

Cancer cells riddled with holes and dying after treatment with an antibody drug conjugate that targets the SAS1B protein on the surface of tumor cells. 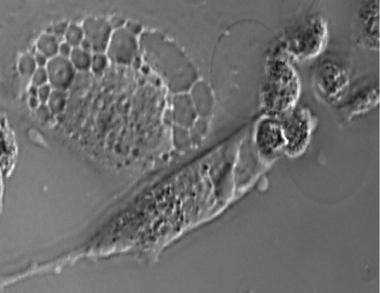 Pires and Herr hope that doctors will one day be able to use the monoclonal antibodies to measure patients’ SAS1B protein levels in blood. Those with elevated levels of the protein would be tested for the early stages of cancer and receive treatment sooner.

As they fine-tune this early detection method, Herr and Pires plan to begin testing their qualified antibody treatment in model organisms that carry human tumors at U.Va.’s labs this fall.

“If everything goes well, less than a year from now we will know if we’re ready to propose a study for testing within select human populations,” Pires said.

This work was supported by grants from the NIH Fogarty International Center, the Grand Challenges Exploration Program of the Bill and Melinda Gates Foundation, The Wallace H. Coulter Translational Research Partnership Endowment, The Paul Mellon Urologic Oncology Institute in the Cancer Center at the University of Virginia, The Virginia Center for Innovative Technology with matching support from Neoantigenics, Inc., and The Virginia Biosciences Health Research Corporation.

Contacts and sources:
Katie McNally
University of Virginia School of Medicine
on September 14, 2015