After being diagnosed with a chest wall sarcoma, a 54-year-old Spanish man's surgical team made the decision to remove his sternum and a portion of his rib cage and replace it with an implant.

The implant was designed and manufactured by medical device company, Anatomics, who utilised the CSIRO's 3D printing facility, Lab 22 in Melbourne, Australia.

This image shows the front of 3-D printed titanium sternum and ribs. 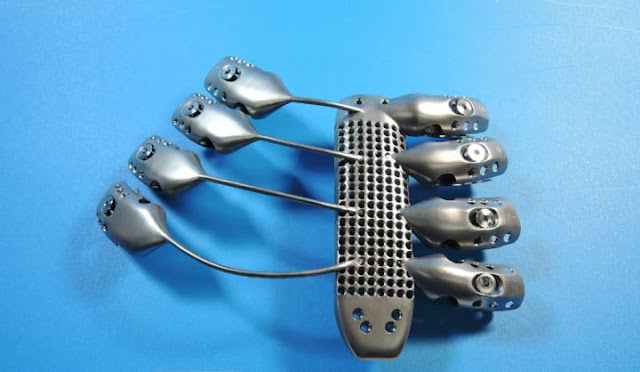 The surgical team, Dr José Aranda, Dr Marcelo Jimene and Dr Gonzalo Varela from Salamanca University Hospital, knew the surgery would be difficult due to the complicated geometries involved in the chest cavity.

The procedure has been described in the European Journal of Cardio-Thoracic Surgery.

"We thought, maybe we could create a new type of implant that we could fully customise to replicate the intricate structures of the sternum and ribs," Dr Aranda said.

"We wanted to provide a safer option for our patient, and improve their recovery post-surgery."

That's when the surgeons turned to Anatomics.

After assessing the complexity of the requirements, Anatomics CEO Andrew Batty said the solution lay in metallic 3D printing.

"We wanted to 3D print the implant from titanium because of its complex geometry and design," Mr Batty said.

"While titanium implants have previously been used in chest surgery, designs have not considered the issues surrounding long term fixation.

"Flat and plate implants rely on screws for rigid fixation that may come loose over time. This can increase the risk of complications and the possibility of reoperation."

Through high resolution CT data, the Anatomics team was able to create a 3D reconstruction of the chest wall and tumour, allowing the surgeons to plan and accurately define resection margins.

"From this, we were able to design an implant with a rigid sternal core and semi-flexible titanium rods to act as prosthetic ribs attached to the sternum," Mr Batty said.

Working with experts at CSIRO's 3D printing facility Lab 22, the team then manufactured the implant out of surgical grade titanium alloy.

"The printer works by directing an electron beam at a bed of titanium powder in order to melt it. This process is then repeated, building the product up layer-by-layer until you have a complete implant.

"As well as being customisable, it also allows for rapid prototyping - which can make a big difference if a patient is waiting for surgery."

Once the prosthesis was complete it was couriered to Spain and implanted into the patient.

"Thanks to 3D printing technology and a unique resection template, we were able to create a body part that was fully customised and fitted like a glove."