Scientists believe that about 4 billion years ago, during a period called the Late Heavy Bombardment, the moon took a severe beating, as an army of asteroids pelted its surface, carving out craters and opening deep fissures in its crust. Such sustained impacts increased the moon's porosity, opening up a network of large seams beneath the lunar surface.

Researchers analyzed the gravity signatures of more than 1,200 craters (in yellow) on the far side of the moon. 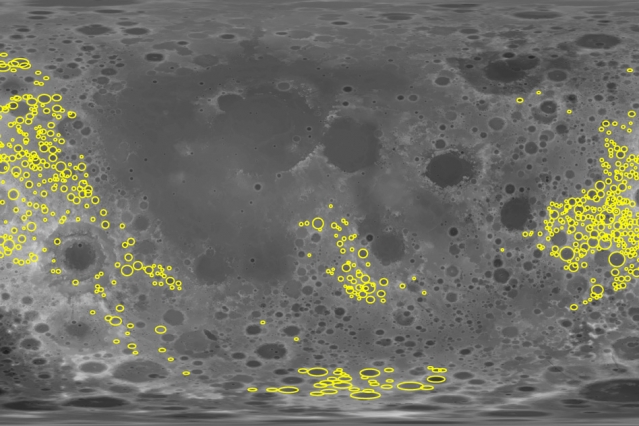 Now scientists at MIT and elsewhere have identified regions on the far side of the moon, called the lunar highlands, that may have been so heavily bombarded -- particularly by small asteroids -- that the impacts completely shattered the upper crust, leaving these regions essentially as fractured and porous as they could be. The scientists found that further impacts to these highly porous regions may have then had the opposite effect, sealing up cracks and decreasing porosity.

The researchers observed this effect in the upper layer of the crust -- a layer that scientists refer to as the megaregolith. This layer is dominated by relatively small craters, measuring 30 kilometers or less in diameter. In contrast, it appears that deeper layers of crust, that are affected by larger craters, are not quite as battered, and are less fractured and porous.

Jason Soderblom, a research scientist in MIT's Department of Earth, Atmospheric and Planetary Sciences, says the evolution of the moon's porosity can give scientists clues to some of the earliest life-supporting processes taking place in the solar system.

"The whole process of generating pore space within planetary crusts is critically important in understanding how water gets into the subsurface," Soderblom says. "On Earth, we believe that life may have evolved somewhat in the subsurface, and this is a primary mechanism to create subsurface pockets and void spaces, and really drives a lot of the rates at which these processes happen. The moon is a really ideal place to study this."

Soderblom and his colleagues, including Maria Zuber, the E.A. Griswold Professor of Geophysics and MIT's vice president for research, have published their findings in the journal Geophysical Research Letters.

The team used data obtained by NASA's Gravity Recovery and Interior Laboratory (GRAIL) -- twin spacecraft that orbited the moon throughout 2012, each measuring the push and pull of the other as an indicator of the moon's gravity.

The moon as observed in visible light (left), topography (center, where red is high and blue is low), and the GRAIL gravity gradients (right). The Procellarum region is a broad region of low topography covered in dark mare basalt. The gravity gradients reveal a giant rectangular pattern of structures surrounding the region. 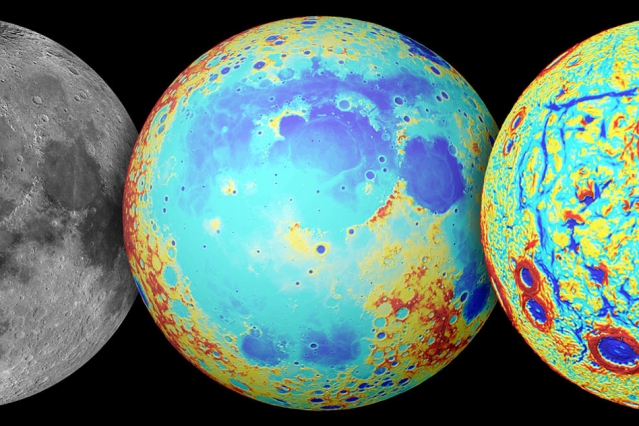 With the GRAIL data, researchers mapped the gravity field in and around more than 1,200 craters on the far side of the moon. This region, the lunar highlands, makes up the moon's most ancient, heavily cratered terrain.

They then carried out an analysis called a Bouger correction to subtract the gravitational effect of mountains, valleys, and other topology from the total gravity field. What's left is the gravity field beneath the surface, within the moon's crust.

"There's an assumption we do have to make, which is that there's no changes in the material itself, and that all of the bumps we're seeing [in the gravity field] are from changes in the porosity and the amount of air between the rock," Soderblom explains.

Soderblom calculated the gravity signatures in and around 1,200 craters on the far side of the moon, and compared the gravity within each crater with the gravity of the surrounding terrain, to determine whether an impact increased or decreased the local porosity.

For craters smaller than 30 kilometers in diameter, he found impacts both increased and decreased porosity in the upper layer of the moon's crust.

"For the smallest craters that we're looking at, we think we're starting to see where the moon has gone through so much fracturing that it gets to a point where the porosity of the crust just stays at some constant level," Soderblom says. "You can keep impacting it and you'll hit regions where you'll increase porosity here and decrease it there, but on average it stays constant."

The researchers found that larger craters, which excavated much deeper into the moon's crust, only increased porosity in the underlying crust -- an indication that these deeper layers have not reached a steady state in porosity, and are not as fractured as the megaregolith. 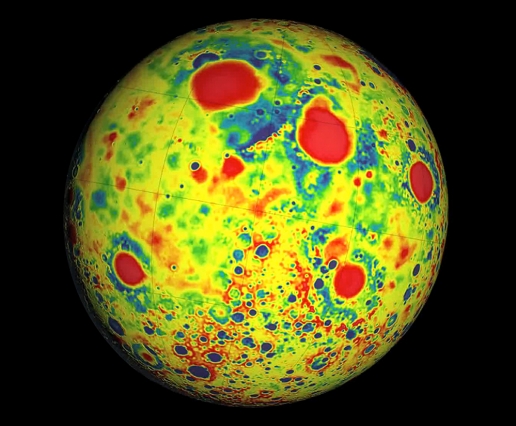 Soderblom says the gravity signatures of the larger craters in particular may provide insight into just how many impacts the moon, and other terrestrial bodies, sustained during the Late Heavy Bombardment.

"For the smaller craters, it's like if you're filling a bucket, eventually your bucket gets full, but if you keep pouring cups of water into the bucket, you can't tell how many cups of water beyond full you've gone," Soderblom says. "Looking at the larger craters at the subsurface might give us insight, because that 'bucket' isn't full yet."

Ultimately, tracing the moon's changing porosity may help scientists track the trajectory of the moon's impactors 4 billion years ago.

"What we really hope to do is to figure out the number of impacts in the range of 100 kilometers in diameter, and from that, we can extrapolate to the smaller craters, assuming different populations of impactors, and those different assumptions will tell us where the impactors came from," Soderblom says. "This will help to understand the origin of the Late Heavy Bombardment, and whether it was disrupted material from the asteroid belt, or if it was further out."