During their first Gernsheim dig last year, Frankfurt University archaeologists suspected that a small Roman settlement must have also existed here in the Hessian Ried. Now they have discovered clear relics of a Roman village, built in part on the foundations of the fort after the soldiers left. This probably occurred around 120 AD. At the time the cohort (about 500 soldiers) was transferred from the Rhine to the Limes, and a period of peace lasting until about 260 AD began for the Roman village (which was part of the Roman province of Germania Superior) with the "Pax Romana".

This is an aerial Image of the foundation of a Roman stone building. Length of the leveling staff (White) at the upper edge of the picture: 5 meters.


Until a year ago, little was known about Roman Gernsheim even though Roman finds have repeatedly been made here since the 19th century. "We now know that from the 1st to the 3rd century an important village-like settlement or 'vicus' must have existed here, comparable to similar villages already proven to have existed in Groß-Gerau, Dieburg or Ladenburg", explains dig leader Dr. Thomas Maurer from the Goethe University, who has been going from Frankfurt to Southern Hesse for years in search of traces. He has published his findings in a major journal about the North Hessian Ried during the Roman imperial period.

During the second excavation campaign running from 3 August to early October, the 20 students of the "Archaeology and History of the Roman Provinces" course under the direction of Maurer have already uncovered the well-preserved foundation of a stone building, fire pits, at least two wells and some cellar pits. They also filled boxes with shards of fine, coarse and transport ceramics, which will undergo scientific examination in order to allow more accurate dating of the fort and the village. "We've also found real treasures such as rare garment clasps, several pearls, parts of a board game (dice, playing pieces) and a hairpin made from bone and crowned with a female bust", explains a delighted Maurer.

Gaming piece and dice out of bone are shown. The principle of the dice corresponds exactly to that one of modern dice. 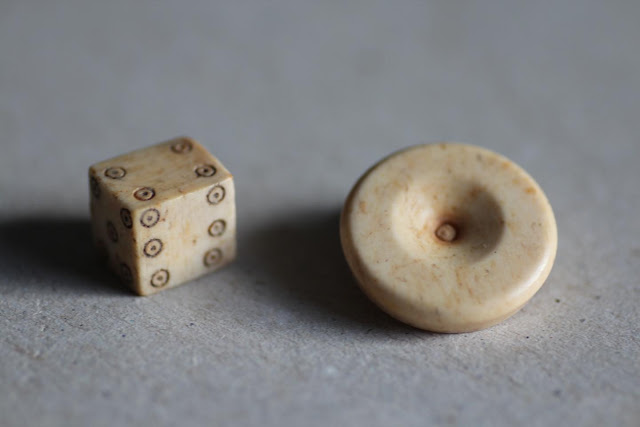 
The people who settled in the village around the fort were primarily family members of the soldiers and tradespeople who benefited from the purchasing power of the military. "A temporary downturn probably resulted when the troops left - this is something we know from sites which have been studied more thoroughly", Maurer adds. However, stone buildings were already erected in the "Gernsheim Roman village" during the 2nd century, which suggests that the settlement was prospering. The population probably had mainly Gallic-Germanic origins, with perhaps a few "true" Romans - persons with Roman citizenship who moved here from faraway provinces. This is illustrated by specific archaeological finds; most notably pieces of traditional dress but also coins. One of the historic finds from Gernsheim is a coin from Bithynia (Northwest Anatolia), which was certainly not among the coins in circulation in Germania Superior but would instead have been a form of souvenir.

A troop unit with about 500 soldiers (cohort) was stationed in this area between 70/80 and 110/120 AD. Evidence of two V-shaped ditches typical of this kind of fort as well as other finds dating from the time after the fort was abandoned have been discovered here over the past year. An unusually large number of finds have been made. This is because when the Romans left they dismantled the fort and filled in the ditches. A lot of waste was disposed of in the process, especially in the inner ditch. "A stroke of luck for us," comments Prof. Dr. Hans-Markus von Kaenel from the Institute for Archaeological Sciences at Goethe University, who has been retired since 2014. Together with his colleagues and students, von Kaenel studied the Roman Southern Hesse for almost 20 years, carrying out surveys and digs as well as preparing and evaluating material. The results have been published in over 50 papers.

The fort with the settlement was erected in order to take possession of large areas to the east of the Rhine around the seventh decade of the 1st century AD, and to expand the traffic infrastructure from and to the centre Mainz-Mogontiacum. The significance of Gernsheim am Rhein during Roman times is supported by its easily accessible location, with a road to Mainlimes branching from the main Mainz - Ladenburg - Augsburg road. A Rhine harbour is suspected to exist as well, but this couldn't be confirmed during the course of this dig - "and that wasn't really expected from this particular site", Maurer says. The continued expansion of Gernsheim throughout the 20th century threatened to obliterate the archaeological traces more and more. In August of this past year, the first educational dig of the Institute for Archaeology at Goethe University began here on one of the few as yet undeveloped properties, a double lot at Nibelungenstraße 10-12.

During this year's excavation campaign, covering an area of 600 square meters on the property and thus twice as large as last year, the 20 students ensured that the soil was carefully removed, findings surveyed and documented, and objects recovered and packaged carefully. The work has been supported by the Frankfurt archaeologists from the Landesamt für Denkmalpflege Hessen (hessenARCHÄOLOGIE, Darmstadt branch) as well as the Cultural and History Association of Schöfferstadt Gernsheim. Some members of this association, which also operates the Heimatmuseum, provide help and advice to the dig team on a daily basis. The documentation and finds from this excavation campaign form the basis for further scientific work, including in the form of university theses, which will be completed at the Goethe University in the near future.