A Step Closer To Harvesting Fuel From Water and Sunlight

Refined by nature over a billion years, photosynthesis has given life to the planet, providing an environment suitable for the smallest, most primitive organism all the way to our own species.

While scientists have been studying and mimicking the natural phenomenon in the laboratory for years, understanding how to replicate the chemical process behind it has largely remained a mystery — until now.

Natural-light-harvesting-machines: Half the green pigment (chlorophyll) in this Costa Rican rain forest is bound in the light-harvesting complex LHCII (shown in the inset). 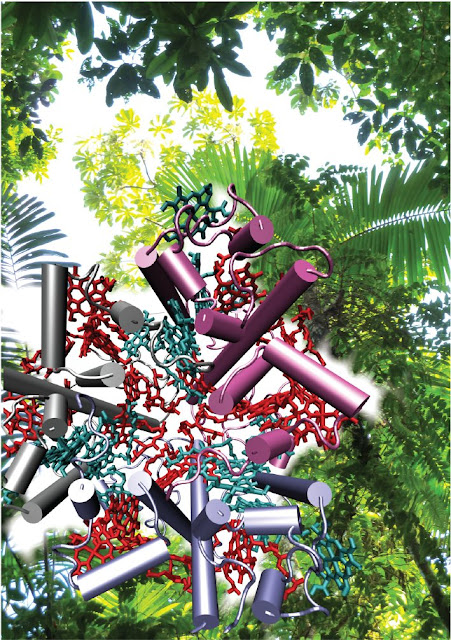 Recent experiments at the U.S. Department of Energy’s Argonne National Laboratory have afforded researchers a greater understanding of how to manipulate photosynthesis, putting humankind one step closer to harvesting “solar fuel,” a clean energy source that could one day help replace coal and natural gas.

Lisa M. Utschig, a bioinorganic chemist at Argonne for 20 years, said storing solar energy in chemical bonds such as those found in hydrogen can provide a robust and renewable energy source. Burning hydrogen as fuel creates no pollutants, making it much less harmful to the environment than common fossil fuel sources.

“We are taking sunlight, which is abundant, and we are using water to make a fuel,” said Utschig, who oversaw the project. "It's pretty remarkable." Unlike the energy derived from solar panels, which must be used quickly, hydrogen, a solar fuel, can be stored.

Sarah Soltau, a postdoctoral fellow at Argonne who conducted much of the research, said “the key finding of Argonne’s most recent research is that we were able to actually watch the processes of electrons going from a light-absorbing molecule to a catalyst that produces solar fuel. This piece of knowledge will help us develop a system to work more efficiently than the one we can create now, and, years on, may allow us to replace oil and gas.”

Argonne researchers attached a protein from spinach to both a light-absorbing molecule (called a photosensitizer) and to a hydrogen-producing catalyst. The protein helped stabilize both the catalyst and photosensitizer, allowing scientists to observe direct electron flow between the two for the first time.

Researchers used transient optical spectroscopy, a method for detecting very fast changes in the light absorption of a molecule when illuminated with a laser pulse, to observe changes in the color of a compound as it undergoes chemical reactions. They also employed electron paramagnetic resonance, another form of spectroscopy, to study where electrons move inside a molecule.

“We don’t just see the result, the hydrogen,” Utschig said. “We are peering into this system. We are able to really see how it works and what the essential parts are. Once you know that, the next time you try and design something, you can make it better because you understand it.”

Argonne has been studying photosynthesis since the 1960s but this particular experiment has been pursued for about a year. Soltau said scientists may be several years from using these techniques to generate storable solar fuels to power cars or households, but that this could be made possible once researchers learn ways to make the process more efficient.

“We need to look at ways to make solar fuel production last longer,” she said. “Right now, the systems don’t have the stability necessary to last weeks or months.”

The scientists’ findings were published in a paper titled "Aqueous light driven hydrogen production by a Ru–ferredoxin–Co biohybrid" in the journal Chemical Communications.

This research was funded by the U.S. Department of Energy’s Office of Science, Basic Energy Sciences.