Domestic cats might be determined hunters, but they stick mostly to residential areas instead of venturing into parks and protected areas where coyotes roam. That’s the key finding from a North Carolina State University analysis of more than 2,100 sites – the first large-scale study of free-ranging cats in the U.S. published in the Journal of Mammalogy.

Cat and Mouse: This camera trap image of a cat with a mouse in its mouth is one of millions captured by students and citizen scientists as part of the project. 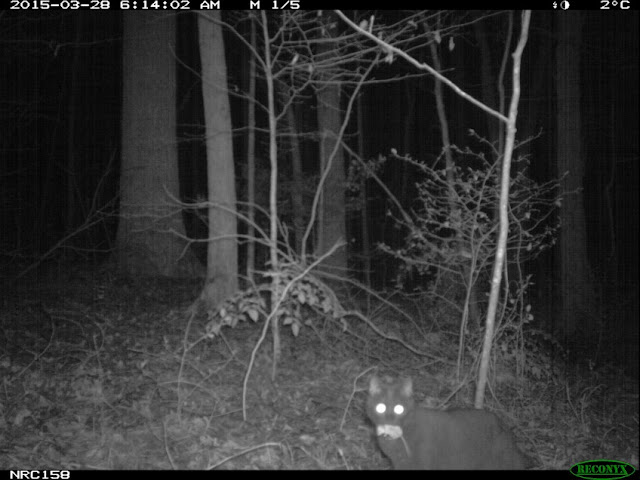 Why is it important to know where 74 million pet cats spend their time away from home?

“Domestic cats are estimated to kill billions of birds and small mammals each year,” says lead author Roland Kays, a zoologist with NC State’s College of Natural Resources and the N.C. Museum of Natural Sciences. “Knowing where they hunt helps assess the risk to wildlife.”

Kays and his colleagues used camera trap data collected by hundreds of students and citizen scientists in six Eastern states. They analyzed millions of images from motion-sensitive cameras located in 32 protected sites and the urban neighborhoods of Raleigh, North Carolina.

Cats were concentrated in residential areas and small urban forests, such as those along Raleigh’s greenway trails.

“We detected cats 300 times more often in residential yards, where coyotes are rare, than in parks,” Kays says.

The more coyotes in an area, the less likely cats were to venture nearby. The one area where both cats and coyotes overlapped was small urban woodlots.

“Most parks had no cats at all,” Kays says. “Our cameras photographed a single cat at some parks, but we only found evidence for more than one cat in two of the 32 parks we surveyed.”

Another interesting finding: Cats that did venture into nature preserves kept the same nocturnal schedule as coyotes, while those in residential areas were diurnal.

The study is part of the eMammal project, which enables citizen scientists to collaborate with researchers at the Smithsonian Institution and NC State University to document animal activity. Co-author Robert Costello is with the Smithsonian National Museum of Natural History. Tavis Forrester, Megan C. Baker and William McShea are with the Smithsonian Conservation Biology Institute. Arielle W. Parsons works with the North Carolina Museum of Natural Sciences. Elizabeth L. Kalies and Joshua J. Millspaugh are with the University of Missouri. George Hess is with NC State University.

This research was funded by National Science Foundation grants 1232442 and 1319293, the VWR Foundation, the U.S. Forest Service, the N.C. Museum of Natural Sciences and the Smithsonian Institution.