When The Original Americans First Arrived Pinpointed with Genome Analysis

The original Americans came from Siberia in a single wave no more than 23,000 years ago, at the height of the last Ice Age, and apparently hung out in the north - perhaps for thousands of years - before spreading in two distinct populations throughout North and South America, according to a new genomic analysis.

This is an artist's representation of the ice age landscape that early Native Americans would have encountered. 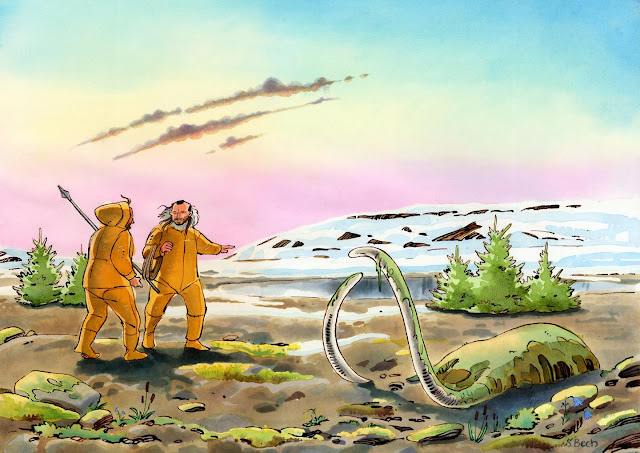 The findings, which will be reported in the July 24 issue of Science, confirm the most popular theory of the peopling of the Americas, but throws cold water on others, including the notion of an earlier wave of people from East Asia prior to the last glacial maximum, and the idea that multiple independent waves produced the major subgroups of Native Americans we see today, as opposed to diversification in the Americas.

This Ice Age migration over a land bridge between Siberia and Alaska is distinct from the arrival of the Inuit and Eskimo, who were latecomers, spreading throughout the Arctic beginning about 5,500 years ago.

The findings also dispel the idea that Polynesians or Europeans contributed to the genetic heritage of Native Americans.

The analysis, using the most comprehensive genetic data set from Native Americans to date, was conducted using three different statistical models, two of them created by UC Berkeley researchers. The first, developed by the lab of Yun Song, a UC Berkeley associate professor of statistics and of electrical engineering and computer sciences, takes into account the full DNA information available from the genomes in the study.

A second method, developed by Rasmus Nielsen, a UC Berkeley professor of integrative biology, and graduate student Kelley Harris, requires much less computation, but relies on a summary of the genome data. These and a third method developed by researchers at the Wellcome Trust Sanger Institute, England, all yielded consistent results. Song and Nielsen are two of three corresponding authors of the paper.

The data consisted of the sequenced genomes of 31 living Native Americans, Siberians and people from around the Pacific Ocean, and the genomes of 23 ancient individuals from North and South America, spanning a time between 200 and 6,000 years ago.

"There is some uncertainty in the dates of the migration and the divergence between the norther and southern Amerindian populations," Song noted, "but as we get more ancient genomes sequenced, we will be able to put more precise dates on the times of migration."

The international team concluded that the northern and southern Native American populations diverged between 11,500 and 14,500 years ago, with the northern branch leading to the present day Athabascans and Amerindians broadly distributed throughout North America. The southern branch peopled Central and South America, as well as part of northern North America.

"The diversification of modern Native Americans appears to have started around 13,000 years ago when the first unique Native American culture appears in the archeological record: the Clovis culture," said Nielsen. "We can date this split so precisely in part because we previously have analyzed the 12,600-year-old remains of a boy associated with the Clovis culture."

One surprise in the genetic data is that both populations of Native Americans have a small admixture of genes from East Asians and Australo-Melanesians, including Papuans, Solomon Islanders and Southeast Asian hunter gatherers.

"It's a surprising finding and it implies that New World populations were not completely isolated from the Old World after their initial migration," said Eske Willerslev from the Centre for GeoGenetics at the Natural History Museum, University of Copenhagen, who headed the study. "We cannot say exactly how and when this gene flow happened, but one possibility is that it came through the Aleutian Islanders living off the coast of Alaska."

Song added that the state-of-the-art statistical methods that his and Nielsen's labs developed "are being made publicly available so that they can be used by others to study complex demographic histories of other populations."