What Cosmic Rays Tell Us about Thunderstorms on Earth

When Prof. Heino Falcke obtained an European Research Council (ERC)  grant to study and identify the sources of ultra-high energy cosmic rays, back in 2008, he could not imagine that his research would provide an important clue to better understand lightning and thunderclouds much closer to us. 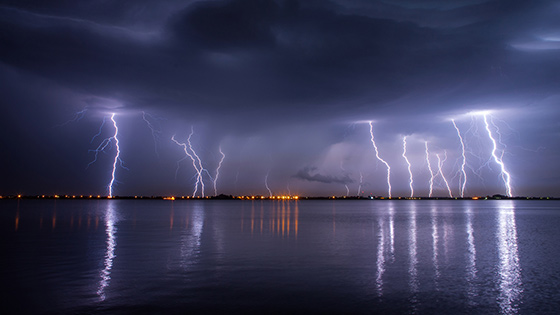 His team indeed realized that cosmic rays, originating in outer space and striking the Earth from all directions, can provide a near instantaneous 'picture' of the electric fields in clouds. The unexpected finding, to be published this week in Physical Review Letters, is the result of a fruitful collaboration between astronomers, particle physicists and geophysicists. The measurements were performed with the LOFAR radio telescope, located in the Netherlands, and partly funded by the ERC.

Cosmic rays are high-energy charged particles. High in the atmosphere, when they strike the atmospheric molecules they create a 'shower' of elementary particles that can reach the Earth's surface. These showers can be measured from the radio emission that is generated when their constituent particles are deflected by the magnetic field of the Earth. The radio emission also gives information about the nature and origin of the particles, and that is exactly what Prof. Falcke focused on between 2009 and 2013 in his ERC funded project "From Black Holes to Ultra-High Energy Cosmic Rays: Exploring the Extremes of the Universe with Low-Frequency Radio Interferometry" (LOFAR AUGER).

"We actually used to put aside LOFAR measurements taken during thunderstorms. They were too messy", says astronomer Pim Schellart, who completed his PhD this year and is supervised by Prof. Heino Falcke. That changed when the same data was examined in the context of a collaboration with astrophysicist Gia Trinh, Prof. Olaf Scholten, from Groningen University and lightning expert Ute Ebert, from the Centrum Wiskunde & Informatica in Amsterdam.

"We modelled how the electric field in thunderstorms can explain the different measurements. This worked very well. The variations of the radio emission gave us a lot of information about the electric fields in thunderstorms. We could even determine the strength of the electric field at a certain height in the cloud. This field can be as strong as 50 kV/m and it can translate into a voltage of hundreds of millions of volts over a distance of multiple kilometres: a thundercloud contains enormous amounts of energy," says Dr Schellart.

Lightning is a highly unpredictable natural phenomenon that inflicts damage to infrastructure and claims victims around the world. This new method to measure electric fields in thunderclouds will contribute to a better understanding and ultimately better predictions of lightning activity.

Current measurement methods from planes, balloons or little rockets are dangerous and too localized. Most importantly the presence of the measurement equipment influences the measurements. Cosmic rays probe the thunderclouds from top to bottom. Moving at almost the speed of light they provide a near instantaneous 'picture' of the electric fields in the cloud. Moreover, they are created by nature and are freely available.

“The ERC grant has contributed to bring LOFAR to a fully functioning radio telescope that is currently surveying the sky,” says Prof. Falcke. During the course of the project, the team also developed a method to decode the radio signal emitted by cosmic rays in the Earth atmosphere. While their origin has not been solved yet, the team has made a significant step forward in understanding the nature of cosmic rays and how to measure them.

“This method allowed us to collect and give meaning to the data that we are presenting in this publication. This is an exemplary form of interdisciplinary collaboration between astronomers, particle physicists and geophysicists”, says Prof. Falcke. “We now hope to develop the model further to ultimately answer the question: how is lightning initiated within thunderclouds?”