What Aluminum Tells Us About Solar System Origins

Physicists at the University of York have revealed a new understanding of nucleosynthesis in stars, providing insight into the role massive stars play in the evolution of the Milky Way and the origins of the Solar System.

Radioactive aluminium (aluminium-26, or Al26) is an element that emits gamma radiation through its decay enabling astronomers to image its location in our galaxy. Studying how Al26 is created in massive stars, scientists have distinguished between previously conflicting assumptions about its rate of production by nuclear fusion.

Measuring the fusion of helium and sodium at two separate particle accelerators in Canada and Denmark, the rate of production of Al26 was determined to within a factor of two. An improvement on previous experiments where there was disagreement of around a factor of 100 between measurements, this outcome removes dispute about the effect of sodium fusion on the rate of aluminium production.

Al26 is known for its relatively short lifespan (in astrophysical terms), decaying in around 1 million years, compared with the lifetime of massive stars of about 19 million years. This means we are now able to better understand gamma radiation maps of the galaxy, observed by space telescopes such as INTEGRAL and COMPTEL, and deduce a more accurate picture of recent activities of massive stars in the galaxy.

Evidence of Al26 decay observed in meteorites and pre-solar grains also suggests that material from massive stars contaminated the gas cloud from which the Solar System formed, providing insight into its early existence.

Dr Alison Laird, Reader in the University of York’s Department of Physics and lead author on one of the two research papers, said: “This research highlights clear and unambiguous evidence from gamma-ray observations of the galaxy that nucleosynthesis is happening in stars. By pinning down the production rate of radioactive aluminium, we will be able to interpret and understand these observations. 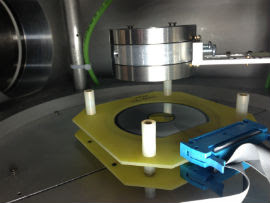 “Now we better understand the processes within stars that drive aluminium production, we pave the way for more detailed and thorough research into how massive stars affect our galaxy and the origins of our Solar System.”

Dr Christian Diget, Lecturer in Nuclear Astrophysics in York’s Department of Physics and a lead researcher on the second research paper, said: “These two experiments, completely independent of each other at a technical level and using opposite methodology, provide the most definitive research we have to date of radioactive aluminium production. Through this, we can now much better understand where and how aluminium-26 is produced in stars, and can simulate in the lab how stars work.

“By observing aluminium decay through gamma-radiation maps, we are now able to build a more accurate picture of the conditions when our Solar System formed.”


Contacts and sources:
Saskia Angenent
University of York
on July 29, 2015