Were Icy Comets Storks For Life On Earth?

Early Earth was an inhospitable place where the planet was often bombarded by comets and other large astrophysical bodies.

Some of those comets contained complex prebiotic materials, such as amino acids and peptides (chains of amino acids), which are some of the most basic building blocks of life on Earth.

This simulation depicts a comet hitting the young Earth, generating the amino acids necessary for life. 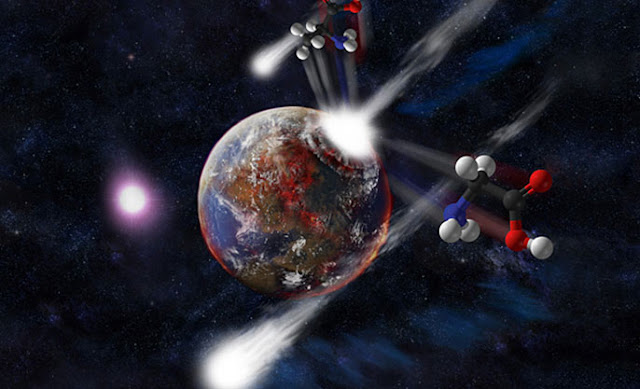 “The survivability of these compounds under impact conditions is mostly unknown,” said Lawrence Livermore’s Nir Goldman, who recently received a NASA grant to continue his astrobiology research. “Our research hopes to answer these questions and give an indication for what types of potentially life-building compounds would be produced under these conditions.”

Basically, Goldman is trying to figure out if life on Earth really did come from out of this world.

Goldman’s early research found that the impact of icy comets crashing into Earth billions of years ago could have produced a variety of small prebiotic or life-building compounds. His work using quantum simulations predicted that the simple molecules found in comets (such as water, ammonia, methanol and carbon dioxide) could have supplied the raw materials, and the impact with early Earth would have yielded an abundant supply of energy to drive the synthesis of compounds like protein forming amino acids.

In later work, researchers from Imperial College in London and University of Kent conducted a series of experiments very similar to Goldman’s simulations in which a projectile was fired using a light gas gun into a typical cometary ice mixture. The result: Several different types of amino acids formed.

“Impact events could have not only delivered prebiotic precursors to the primitive planet, but the sudden increase in pressure and temperature from the impact itself was likely a driving factor in synthesizing their assembly into these primary structures,” Goldman said.

Specifically, this new $500,000 grant will fund quantum simulation studies to understand aqueous mixtures of pre-formed amino acids under impact conditions. Goldman’s current efforts will extend his previous work by looking at one step higher in complexity, where extreme pressures and temperatures from impact could induce the formation of more intricate chemical structures like peptide chains or simple proteins.

“Large astrophysical bodies such as comets likely already contain more complex prebiotic materials, like amino acids. It’s possible that pre-existing amino acids would have experienced additional impacts during periods of heavy bombardment on early Earth,” Goldman said. “Our quantum simulations hope to help answer these questions, and to give an indication as to what set of thermodynamic conditions promotes their assembly into larger structures.”

How and when prebiotic organic material appeared on early Earth has been debated for close to 60 years, starting with the seminal Miller-Urey experiments, which showed that amino acids could be produced in aqueous mixtures subjected to electrical discharges, simulating lightning on early Earth.

Large bodies from space are carriers of prebiotic materials. Previous analysis of dust samples from comet Wild 2 has shown the presence of the amino acid glycine in the captured material. In addition, dipeptides (i.e., an amino acid dimer) likely exist in interstellar ices. Assuming survival upon delivery to Earth, these could have acted as catalysts in the formation of a number of prebiotic compounds, including sugars and enzymes.

“Our predictions will help spur future collaboration with experimental groups to characterize the synthesis of primary biomaterials due to exposure to extreme pressures and temperatures,” Goldman said.