Discovered four years ago, and following an updated and more in-depth study of the herbivorous mammalian ancestor,Tiarajudens eccentricus, researchers from Brazil and South Africa can now present a meticulous description of the skull, skeleton and dental replacement of this Brazilian species. 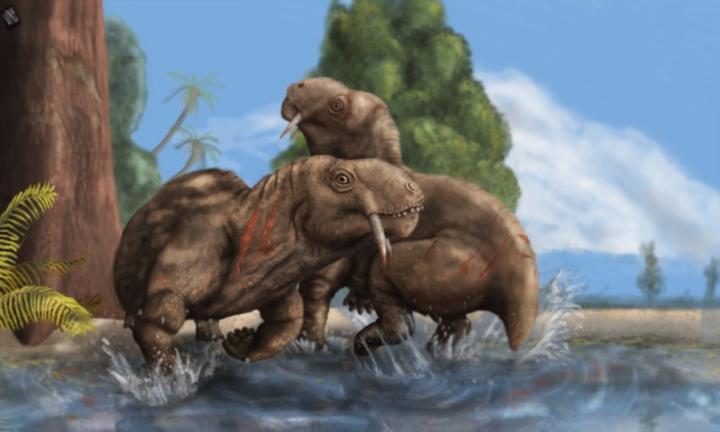 They also learned that 270 million years ago, the interspecific combat and fighting we see between male deer today were already present in these forerunners of mammals.

This description by Brazilian researcher, Dr Juan Carlos Cisneros, and his co-authors from the Evolutionary Studies Institute at the University of the Witwatersrand, Professor Fernando Abdala and Dr Tea Jashasvili, is published in an article, titled:Tiarajudens eccentricus and Anomocephalus africanus, two bizarre anomodonts (Synapsida, Therapsida) with dental occlusion from the Permian of Gondwana in the journal, Royal Society Open Science, on 15 July 2015.

Saber-teeth are known to belong to the large Permian predators' gorgonopsians (also known as saber-tooth reptiles), and in the famous saber-tooth cats from the Ice Age.

When Tiarajudens eccentricus was discovered it had some surprises install: Despite large protruding saber-tooth canines and occluding postcanine teeth, it was an herbivore. The discovery of this Brazilian species also allowed for a reanalysis of the South African species Anomocephalus africanus, discovered 10 years earlier.

Head-butting and canine display during male-male combat first appeared some 270 million years ago. This is what researchers from the Evolutionary Studies Institute at Wits found when they conducted an updated and more in-depth study of the herbivorous mammalian ancestor,Tiarajudens eccentricus, discovered four years ago.

The two species have several similar features that clearly indicated they are closely related but the African species lack of the saber-tooth canines of its Brazilian cousin. In the Middle Permian, where these Gondwana cousins were living, around 270 million years ago, the first communities with diverse, abundant tetrapod herbivores were evolving.

In deer today enlarged canines are used in male-male displays during fighting. The long canine in the herbivore T. eccentricus is interpreted as an indication of its use in a similar way, and is the oldest evidence where male herbivores have used their canines during fights with rivals.

"It is incredible to think that features found in deer such as the water deer, musk deer and muntjacs today were already represented 270 million years ago," says Cisneros.

In another group of mammal fossil relatives, dinocephalians - that lived at the same time as anomodonts, some of the bones in their foreheads were massively thickened. This can be interpreted as being used in head-butting combat, a modern behaviour displayed by several deer species today.

"Fossils are always surprising us. Now they show us unexpectedly that 270 million years ago two forms of interspecific combat represented in deer today, were already present in the forerunners of mammals," says Cisneros.

Contacts and sources:
Erna van Wyk
University of the Witwatersrand
on July 19, 2015