Super-Earth Found in Nearby Solar System, Only 21 Light Years Away

Using NASA's Spitzer Space Telescope, astronomers have confirmed the discovery of the nearest rocky planet outside our solar system, larger than Earth and a potential gold mine of science data.

Dubbed HD 219134b, this exoplanet, which orbits too close to its star to sustain life, is a mere 21 light-years away. While the planet itself can't be seen directly, even by telescopes, the star it orbits is visible to the naked eye in dark skies in the Cassiopeia constellation, near the North Star.

This artist's concept shows the silhouette of a rocky planet, dubbed HD 219134b. At 21 light-years away, the planet is the closest outside of our solar system that can be seen crossing, or transiting, its star. 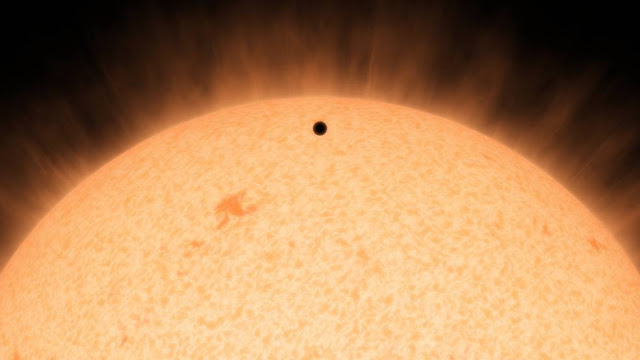 HD 219134b is also the closest exoplanet to Earth to be detected transiting, or crossing in front of, its star and, therefore, perfect for extensive research.

"Transiting exoplanets are worth their weight in gold because they can be extensively characterized," said Michael Werner, the project scientist for the Spitzer mission at NASA's Jet Propulsion Laboratory (JPL) in Pasadena, California. "This exoplanet will be one of the most studied for decades to come."

The planet, initially discovered using HARPS-North instrument on the Italian 3.6-meter Galileo National Telescope in the Canary Islands, is the subject of a study accepted for publication in the journal Astronomy & Astrophysics.

Study lead author Ati Motalebi of the Geneva Observatory in Switzerland said she believes the planet is the ideal target for NASA’s James Webb Space Telescope in 2018.

"Webb and future large, ground-based observatories are sure to point at it and examine it in detail,” Motalebi said.

Only a small fraction of exoplanets can be detected transiting their stars due to their relative orientation to Earth. When the orientation is just right, the planet’s orbit places it between its star and Earth, dimming the detectable light of its star. It’s this dimming of the star that is actually captured by observatories such as Spitzer, and can reveal not only the size of the planet but also clues about its composition.

"Most of the known planets are hundreds of light-years away. This one is practically a next-door neighbor," said astronomer and study co-author Lars A. Buchhave of the Harvard-Smithsonian Center for Astrophysics in Cambridge, Massachusetts. For reference, the closest known planet is GJ674b at 14.8 light-years away; its composition is unknown.

HD 219134b was first sighted by the HARPS-North instrument and a method called the radial velocity technique, in which a planet's mass and orbit can be measured by the tug it exerts on its host star. The planet was determined to have a mass 4.5 times that of Earth, and a speedy three-day orbit around its star.

Spitzer followed up on the finding, discovering the planet transits its star. Infrared measurements from Spitzer revealed the planet's size, about 1.6 times that of Earth. Combining the size and mass gives it a density of 3.5 ounces per cubic inch (six grams per cubic centimeter) -- confirming HD 219134b is a rocky planet.

Now that astronomers know HD 219134b transits its star, scientists will be scrambling to observe it from the ground and space. The goal is to tease chemical information out of the dimming starlight as the planet passes before it. If the planet has an atmosphere, chemicals in it can imprint patterns in the observed starlight.

Rocky planets such as this one, with bigger-than-Earth proportions, belong to a growing class of planets termed super-Earths.

"Thanks to NASA's Kepler mission, we know super-Earths are ubiquitous in our galaxy, but we still know very little about them," said co-author Michael Gillon of the University of Liege in Belgium, lead scientist for the Spitzer detection of the transit. "Now we have a local specimen to study in greater detail. It can be considered a kind of Rosetta Stone for the study of super-Earths."

Further observations with HARPS-North also revealed three more planets in the same star system, farther than HD 219134b. Two are relatively small and not too far from the star. Small, tightly packed multi-planet systems are completely different from our own solar system, but, like super-Earths, are being found in increasing numbers.

JPL manages the Spitzer mission for NASA's Science Mission Directorate in Washington. Science operations are conducted at the Spitzer Science Center at the California Institute of Technology (Caltech) in Pasadena. Spacecraft operations are based at Lockheed Martin Space Systems Company in Littleton, Colorado. Data are archived at the Infrared Science Archive, housed at Caltech’s Infrared Processing and Analysis Center.