University of Adelaide research has shown for the first time that, despite not having a nervous system, plants use signals normally associated with animals when they encounter stress.

Published today in the journal Nature Communications, the researchers at the Australian Research Council (ARC) Centre of Excellence in Plant Energy Biology reported how plants respond to their environment with a similar combination of chemical and electrical responses to animals, but through machinery that is specific to plants.

"We've known for a long-time that the animal neurotransmitter GABA (gamma-aminobutyric acid) is produced by plants under stress, for example when they encounter drought, salinity, viruses, acidic soils or extreme temperatures," says senior author Associate Professor Matthew Gilliham, ARC Future Fellow in the University's School of Agriculture, Food and Wine. 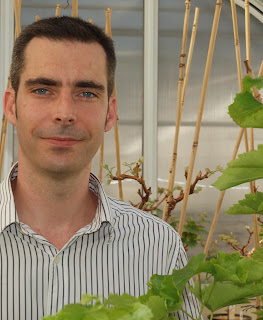 "But it was not known whether GABA was a signal in plants. We've discovered that plants bind GABA in a similar way to animals, resulting in electrical signals that ultimately regulate plant growth when a plant is exposed to a stressful environment."

"By identifying how plants use GABA as a stress signal we have a new tool to help in the global effort to breed more stress resilient crops to fight food insecurity."

Despite a similar function, the proteins that bind GABA and their mammalian counterparts only resemble each other in the region where they interact with the neurotransmitter - the rest of the protein looks quite different.

"This raises very interesting questions about how GABA has been recruited as a messenger in both plant and animal kingdoms," says co-lead author Dr Sunita Ramesh. "It seems likely that this has evolved in both kingdoms separately."

The researchers say these findings could also explain why particular plant-derived drugs used as sedatives and anti-epileptics work in humans. These drugs are able to interact with proteins in the GABA-signalling system in both plants and animals -- suggesting that future work on other plant GABA signalling agents will also benefit the medical field.