People aren't the only ones who perform better on tests or athletic events when they are just a little bit nervous -- dogs do too. But in dogs as in people, the right amount of stress depends on disposition. 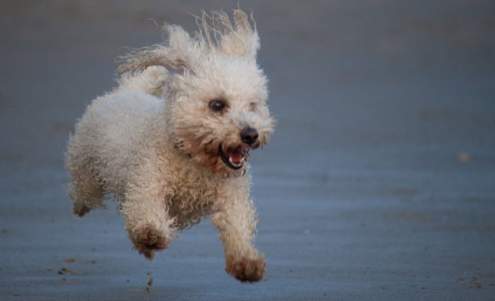 A new study by researchers at Duke University finds that a little extra stress and stimulation makes hyper dogs crack under pressure but gives mellow dogs an edge.

The findings appear online in the journal Animal Cognition.

According to an idea in psychology called the Yerkes-Dodson law, a little stress can be a good thing, but only up to a point.

A task that isn't demanding or challenging enough can make it hard to stay engaged and perform at one's peak. But when the pressure becomes too much to handle, performance is likely to suffer again.

The idea is the relationship between stress and performance follows a Goldilocks model: Both people and animals function best when the level of stress is not too much, nor too little, but just right.

"When you're taking a test, for example, it helps to be a little bit anxious so you don't just blow it off," said study co-author Emily Bray, who was an undergraduate at Duke at the time of the study. "But if you're too nervous, even if you study and you really know the material, you aren't going to perform at your best."

Researchers first observed this pattern more than a hundred years ago in lab rats, but it has since been demonstrated in chickens, cats and humans. In a new study, a Duke team consisting of Bray and evolutionary anthropologists Evan MacLean and Brian Hare of Duke's Canine Cognition Center wanted to find out if the conditions that enable certain animals to do their best also depend on the animal's underlying temperament.

In a series of experiments, the researchers challenged dogs to retrieve a meat jerky treat from a person standing behind a clear plastic barrier that was six feet wide and three feet tall. To get it right, the dogs had to resist the impulse to try to take the shortest path to reach the treat -- which would only cause them to whack into the barrier and bump their heads against the plastic -- and instead walk around the barrier to one of the open sides.

In one set of trials, an experimenter stood behind the barrier holding a treat and called the dog's name in a calm, flat voice. In another set of trials, the experimenter enthusiastically waved the treat in the air and used an urgent, excited voice.

Charlie Brown, a two-year-old spaniel, loses focus under pressure in an experiment at the Duke Canine Cognition Center. A new study by Duke researchers finds that extra stress and stimulation can make hyper dogs like Charlie choke but gives mellow dogs an edge.

The researchers tested 30 pet dogs, ranging in age from an eight-month-old Jack Russell terrier named Enzo to an 11-year-old Vizsla named Sienna. They also tested 76 assistance dogs at Canine Companions for Independence in Santa Rosa, California, a non-profit organization that breeds and trains assistance dogs for people with disabilities.

The researchers studied video recordings of each dog and estimated their baseline temperament in terms of tail wags per minute. "The service dogs were generally more cool in the face of stress or distraction, whereas the pet dogs tended to be more excitable and high-strung," Bray said.

Both groups of dogs were able to solve the puzzle. But the optimal amount of stress and stimulation depended on each dog's disposition.

For the dogs that were naturally calm and laid-back -- measured by how quickly they tended to wag their tails -- increasing the level of excitement and urgency boosted their ability to stay on task and get the treat.

But for excitable dogs the pattern was reversed. Increasing the level of stimulation only made them take longer.

In one high-arousal trial, a two-year-old spaniel named Charlie Brown lost it and shut down, barking and zipping around crazily until she almost ran out of time.

"In the first five trials she did fine and solved the puzzle quickly with no problems," Bray said. "Then when the high-arousal trials started she choked. She just couldn't figure it out."

"Adding more excitement pushed the pet dogs over the edge and impaired their ability to perform at their peak," Bray said.

The results will help researchers develop better tests to determine which dogs are likely to graduate from service dog training programs, for example.