A diet high in soybean oil causes more obesity and diabetes than a diet high in fructose, a sugar commonly found in soda and processed foods, according to a just published paper by scientists at the University of California, Riverside.

The scientists fed male mice a series of four diets that contained 40 percent fat, similar to what Americans currently consume. In one diet the researchers used coconut oil, which consists primarily of saturated fat. In the second diet about half of the coconut oil was replaced with soybean oil, which contains primarily polyunsaturated fats and is a main ingredient in vegetable oil. That diet corresponded with roughly the amount of soybean oil Americans currently consume.

A diet high in soybean oil causes more obesity and diabetes than a diet high in fructose, a sugar commonly found in soda and processed foods, UC Riverside researchers found. 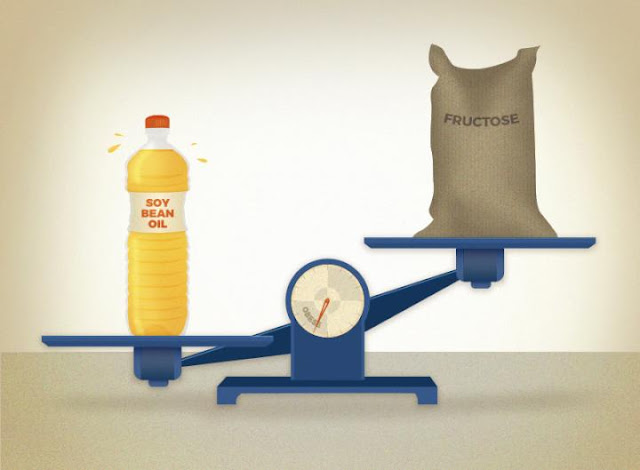 The other two diets had added fructose, comparable to the amount consumed by many Americans. All four diets contained the same number of calories and there was no significant difference in the amount of food eaten by the mice on the diets. Thus, the researchers were able to study the effects of the different oils and fructose in the context of a constant caloric intake.

Compared to mice on the high coconut oil diet, mice on the high soybean oil diet showed increased weight gain, larger fat deposits, a fatty liver with signs of injury, diabetes and insulin resistance, all of which are part of the Metabolic Syndrome. Fructose in the diet had less severe metabolic effects than soybean oil although it did cause more negative effects in the kidney and a marked increase in prolapsed rectums, a symptom of inflammatory bowel disease (IBD), which like obesity is on the rise.

"This was a major surprise for us - that soybean oil is causing more obesity and diabetes than fructose - especially when you see headlines everyday about the potential role of sugar consumption in the current obesity epidemic," said Poonamjot Deol, the assistant project scientist who directed the project in the lab of Frances M. Sladek, a professor of cell biology and neuroscience.

The paper, "Soybean oil is more obesogenic and diabetogenic than coconut oil and fructose in mouse: potential role for the liver," was published July 22 in the journal PLOS ONE.

In the U.S. the consumption of soybean oil has increased greatly in the last four decades due to a number of factors, including results from studies in the 1960s that found a positive correlation between saturated fatty acids and the risk of cardiovascular disease. As a result of these studies, nutritional guidelines were created that encouraged people to reduce their intake of saturated fats, commonly found in meat and dairy products, and increase their intake of polyunsaturated fatty acids found in plant oils, such as soybean oil.

The research outlined in the paper is believed to be the first side-by-side look at the impacts of saturated fat, unsaturated fat and fructose on obesity, diabetes, insulin resistance and nonalcoholic fatty liver disease, which along with heart disease and hypertension, are referred to as the Metabolic Syndrome.

The study also includes extensive analysis of changes in gene expression and metabolite levels in the livers of mice fed these diets. The most striking results were those showing that soybean oil significantly affects the expression of many genes that metabolize drugs and other foreign compounds that enter the body, suggesting that a soybean oil-enriched diet could affect one's response to drugs and environmental toxicants, if humans show the same response as mice.

The UC Riverside researchers also did a study with corn oil, which induced more obesity than coconut oil but not quite as much as soybean oil. They are currently doing tests with lard and olive oil. They have not tested canola oil or palm oil.

The researchers cautioned that they didn't study the impacts of the diets on cardiovascular diseases and note in the paper that the consumption of vegetable oils could be beneficial for cardiac health, even if it also induces obesity and diabetes.

That research, presented at a conference in March, found that the new genetically modified, high oleic soybean oil (Plenish), which has a lower amount of polyunsaturated fatty acid than traditional soybean oil, is healthier than regular soybean oil but just barely. Using mice, the researchers found that the Plenish oil also induces fatty liver although somewhat less obesity and diabetes. Importantly, it did not cause insulin resistance, a pre-diabetic condition. It should be noted that both the regular soybean oil and Plenish are from soybeans that are genetically modified to be resistant to the herbicide RoundUp.

The researchers are now finalizing a manuscript about these findings that also incorporates tests done with olive oil.