Rosetta’s investigations of its comet are continuing as the mission teams count down the last month to perihelion – the closest point to the Sun along the comet’s orbit – when the comet’s activity is expected to be at its highest.

Perihelion is the closest point a Solar System object gets to the Sun along its orbit (aphelion is the term given to the most distant point). The term derives from ancient Greek, where ‘peri’ means near and ‘helios’ means Sun. 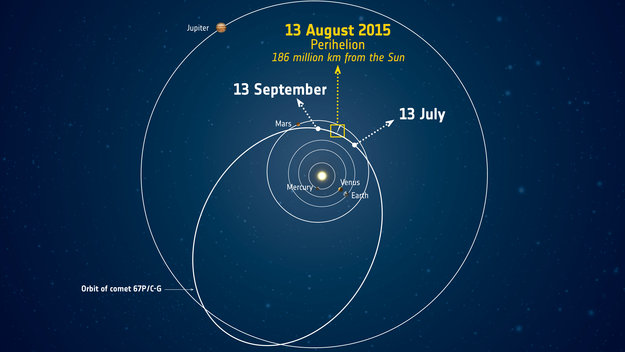 Comet 67P/Churyumov–Gerasimenko is on a 6.5 year elliptical orbit around the Sun which takes it between 850 million km (5.68 AU) from the Sun at its most distant, just beyond the orbit of Jupiter, and 186 million km (1.24 AU) at its nearest, between the orbits of Earth and Mars. As a comparison, Earth orbits the Sun at an average distance of 149 million km (1 Astronomical Unit, or AU).

Rosetta has been studying Comet 67P/Churyumov–Gerasimenko for over a year now, with observations beginning during the approach to the comet in March 2014. This included witnessing an outburst in late April 2014 and the revelation of the comet’s curious shape in early July.

Comet 67P/Churyumov-Gerasimenko. The image resolution is 13.1 m/pixel and the image measures 13.4 km across. 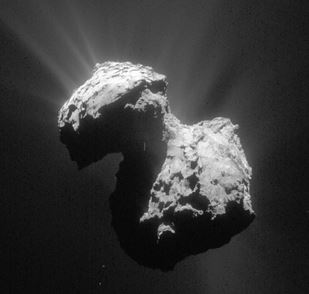 After arriving at a distance of 100 km from the double-lobed comet on 6 August, Rosetta has spent an intense year analysing the properties of this intriguing body – the interior, surface and surrounding dust, gas and plasma.

Comets are known to be made of dust and frozen ices. As these ices are warmed by the Sun, they turn directly to vapour, with the gases dragging the comet’s dust along with it. Together, the gas and dust create a fuzzy atmosphere, or coma, and often-spectacular tails extend tens or hundreds of thousands of kilometres into space.

While ground-based observations can monitor the development of the coma and tail from afar, Rosetta has a ringside seat for studying the source of this activity directly from the nucleus. One important aspect of Rosetta’s long-term study is watching how the activity waxes and wanes along the comet’s orbit.

Near perihelion, comets reach their highest level of brightness, releasing large amounts of gas and dust. Possible outbursts and other unpredictable events might also take place around perihelion, so it is extremely important to obtain as many observations as possible during this period. While ground-based observations provide large-scale context for Rosetta’s measurements, Rosetta’s close-up data provide in turn the possibility to calibrate many of the observations made from the ground. This unique opportunity will also improve the study and interpretation of ground-based observations of other comets.

The comet has a 6.5 year commute around the Sun from just beyond the orbit of Jupiter at its furthest, to between the orbits of Earth and Mars at it closest.

The 19 regions identified on Comet 67P/Churyumov–Gerasimenko are separated by distinct geomorphological boundaries. Following the ancient Egyptian theme of the Rosetta mission, they are named for Egyptian deities. They are grouped according to the type of terrain dominant within each region. Five basic categories of terrain type have been determined: dust-covered (Ma’at, Ash and Babi); brittle materials with pits and circular structures (Seth); large-scale depressions (Hatmehit, Nut and Aten); smooth terrains (Hapi, Imhotep and Anubis), and exposed, more consolidated (‘rock-like’) surfaces (Maftet, Bastet, Serqet, Hathor, Anuket, Khepry, Aker, Atum and Apis). 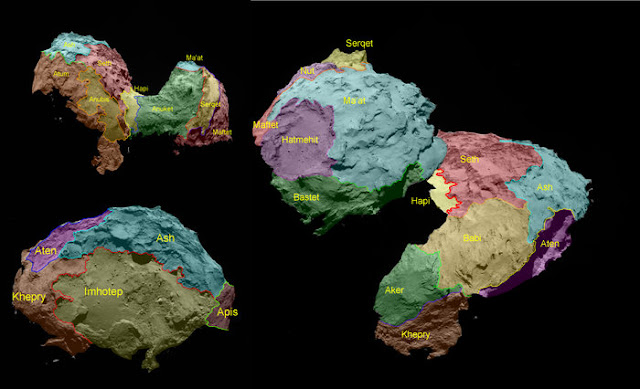 “Perihelion is an important milestone in any comet’s calendar, and even more so for the Rosetta mission because this will be the first time a spacecraft has been following a comet from close quarters as it moves through this phase of its journey around the Solar System,” notes Matt Taylor, ESA’s Rosetta project scientist.

“We’re looking forward to reaching perihelion, after which we’ll be continuing to monitor how the comet’s nucleus, activity and plasma environment changes in the year after, as part of our long-term studies.”