Occator Among Batch of New Names and Insights at Ceres

Scientists continue to analyze the latest data from Dawn as the spacecraft makes its way to its third mapping orbit.

This color-coded map from NASA's Dawn mission shows the highs and lows of topography on the surface of dwarf planet Ceres. 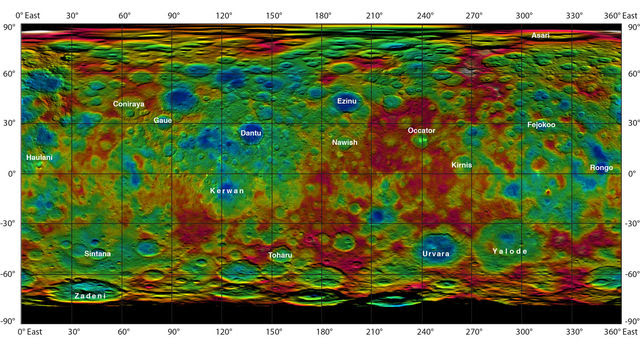 "The craters we find on Ceres, in terms of their depth and diameter, are very similar to what we see on Dione and Tethys, two icy satellites of Saturn that are about the same size and density as Ceres. The features are pretty consistent with an ice-rich crust," said Dawn science team member Paul Schenk, a geologist at the Lunar and Planetary Institute, Houston.

This pair of images shows color-coded maps from NASA's Dawn mission, revealing the highs and lows of topography on the surface of dwarf planet Ceres. 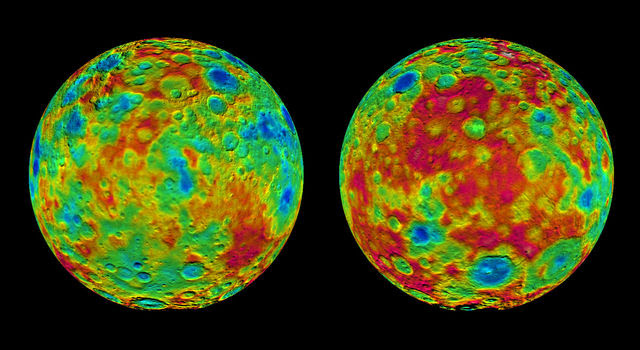 Colorful new maps of Ceres, based on data from NASA's Dawn spacecraft, showcase a diverse topography, with height differences between crater bottoms and mountain peaks as great as 9 miles (15 kilometers).


Some of these craters and other features now have official names, inspired by spirits and deities relating to agriculture from a variety of cultures. The International Astronomical Union recently approved a batch of names for features on Ceres.

The newly labeled features include Occator, the mysterious crater containing Ceres' brightest spots, which has a diameter of about 60 miles (90 kilometers) and a depth of about 2 miles (4 kilometers). Occator is the name of the Roman agriculture deity of harrowing, a method of leveling soil.

A smaller crater with bright material, previously labeled "Spot 1," is now identified as Haulani, after the Hawaiian plant goddess. Haulani has a diameter of about 20 miles (30 kilometers). Temperature data from Dawn's visible and infrared mapping spectrometer show that this crater seems to be colder than most of the territory around it.

Dantu crater, named after the Ghanaian god associated with the planting of corn, is about 75 miles (120 kilometers) across and 3 miles (5 kilometers) deep. A crater called Ezinu, after the Sumerian goddess of grain, is about the same size. Both are less than half the size of Kerwan, named after the Hopi spirit of sprouting maize, and Yalode, a crater named after the African Dahomey goddess worshipped by women at harvest rites.

This image, from Dawn's visible and infrared mapping spectrometer (VIR), highlights a bright region on Ceres known as Haulani, named after the Hawaiian plant goddess. 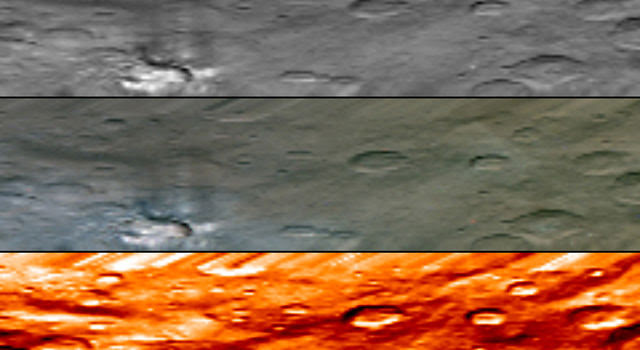 Each row shows Ceres' surface at different wavelengths. On top is a black-and-white image; in the middle is a true-color image, and the bottom is in thermal infrared, where brighter colors represent higher temperatures and dark colors correspond to colder temperatures. The three images appear slightly flattened in the y-axis and smeared in the upper part due to the motion of the spacecraft.

Almost directly south of Occator is Urvara, a crater named for the Indian and Iranian deity of plants and fields. Urvara, about 100 miles (160 kilometers) wide and 3 miles (6 kilometers) deep, has a prominent central pointy peak that is 2 miles (3 kilometers) high.

Dawn is currently spiraling toward its third science orbit, 900 miles (less than 1,500 kilometers) above the surface, or three times closer to Ceres than its previous orbit. The spacecraft will reach this orbit in mid-August and begin taking images and other data again.

Ceres, with a diameter of 584 miles (940 kilometers), is the largest object in the main asteroid belt, located between Mars and Jupiter. This makes Ceres about 40 percent the size of Pluto, another dwarf planet, which NASA's New Horizons mission flew by earlier this month.

On March 6, 2015, Dawn made history as the first mission to reach a dwarf planet, and the first to orbit two distinct extraterrestrial targets. It conducted extensive observations of Vesta in 2011-2012.