Measuring the Mass of a Mars-size Exoplanet by Starlight

Determining the size of an Earth-size exoplanet by the amount of starlight it blocks hundreds of light-years away once was the realm of science fiction.

Measuring the mass of such a small planet based on its gravity was another level entirely, but astronomers have done just that for an exoplanet fifty percent the size of Earth.

Researchers using NASA's Kepler mission data have measured the mass of a Mars-size exoplanet that is about one tenth the mass of Earth. Called Kepler-138b, it is the first exoplanet smaller than Earth to have both its mass and size measured. This significantly extends the range of planets with measured densities.

The artistic concept shows the planetary system harboring Kepler-138b, the first exoplanet smaller than Earth with both a mass and size measurement. The sizes of the planets relative to the star have been exaggerated. 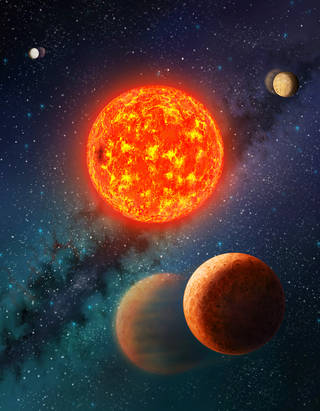 To determine a planet's mass, astronomers typically measure the minuscule movement of the star caused by the gravitational tug of an orbiting planet. For planets the mass of Earth detecting such a tiny tug is extraordinarily challenging with current technology. Fortunately, when a star hosts multiple planets that orbit closely together, scientists have developed another way to get at the planets’ masses.

Daniel Jontof-Hutter, a research associate at the Pennsylvania State University’s Center for Exoplanets and Habitable Worlds, led a team of astronomers in a study to measure the mass of all three planets by precisely observing the times each planet passed in front of, or transited, the star Kepler-138.

"Each planet periodically slows down and accelerates ever so slightly from the gravity of its neighboring planets. The slight change in time between transits allows us to measure the masses of the planets," said Jontof-Hutter.

Each time a planet transits a star it blocks a small fraction of the star's light, allowing astronomers to measure the size of the planet. This is how the Kepler spacecraft has detected thousands of planets around other stars.

By measuring both the mass and size of an exoplanet, scientists can calculate the density and infer the bulk composition to determine if a planet is predominantly made of rock, water or gas. Tiny Kepler-138b's density is consistent with a rocky composition like Earth or Mars, but further observations are needed before astronomers can definitively say that it is a rocky world.

Kepler-138b is the innermost of three planets that orbit Kepler-138, a star less than half the size of our sun and roughly 30 percent cooler. The Kepler-138 system is located about 200 light-years from Earth in the direction of the constellation Lyra.

The outer two planets, Kepler-138c and Kepler-138d, are approximately the size of Earth. Kepler-138c is likely to be rocky, whereas Kepler-138d is less dense and cannot be made of the same mix of material as Earth. All three planets orbit too close to their star for liquid water to exist on the surface and support life, as we know it.

This plot shows the masses and sizes of the smallest exoplanets for which both quantities have been measured. The solar system planets (shown in red) are for comparison.The three Kepler-138 planets (shown in orange) are among the four smallest exoplanets with both size and mass measurements. Kepler-138b is the first exoplanet smaller than Earth to have both its mass and size measured. This significantly extends the range of planets with measured densities. 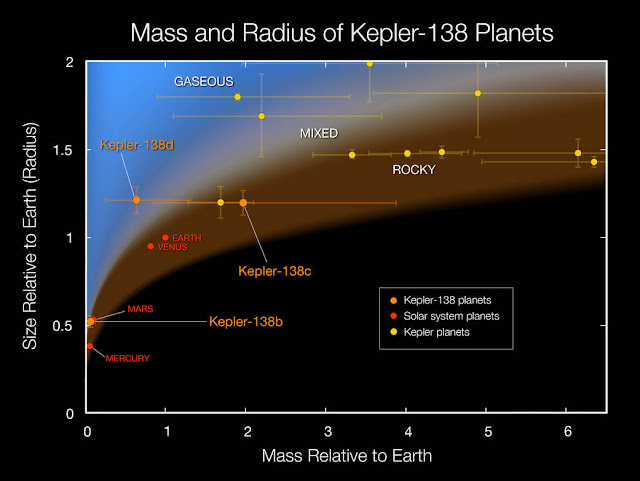 
"The substantial difference between the densities of the two larger planets tells us that not all planets similar to Earth in size are rocky," said Jack Lissauer, co-author and planetary scientist at NASA's Ames Research Center in Moffett Field, Calif. "Further study of small planets will help provide more understanding of the diversity that exists in nature, and will help determine if rocky planets like Earth are common or rare."

Much like astronomers in the early 20th century studied a wide variety of stars to characterize and classify different types, astronomers in the 21st century are doing the same to understand the diversity and demographics of planet populations in our Milky Way galaxy.

Scientists are working to use these new measurements of small planets from Kepler and NASA's upcoming Transiting Exoplanet Survey Satellite to identify patterns in the relationship between mass and size. These insights will provide context for understanding the history of Earth and other planets in our own solar system, and inform the next generation planet hunters as they search for life beyond the solar system.

A previous study had measured the masses of the two outer planets. This new study performed a more detailed analysis of the Kepler-138 system using additional Kepler data. This enabled the measurement of the mass of the Mars-size inner planet and improved the accuracy of the size and mass measurements for the outer planets. The results will appear in this Thursday's issue of the journal Nature.

A team of astronomers have measured the mass and size of the smallest exoplanet yet, a Mars-sized planet named Kepler-138b orbiting a red dwarf star about 200 light years from the Solar System. The animation shows the mass-radius diagram based on measurements of 127 exoplanets. The video begins by showing planets with masses similar to Jupiter and slowly zooms towards small masses and radii planets to display a comparison of the physical properties of the Kepler-138 planets relative to Earth, Venus, Mars and Mercury.

The planet Kepler-138b is the first exoplanet smaller than the Earth to have both its mass and its size measured, and is one of three planets that orbit the star Kepler-138, and pass in front of it, or transit, every orbit. Each time a planet transits the star, it blocks a small fraction of the star's light, allowing astronomers to measure the size of the planet. All three planets were identified by NASA's Kepler mission that has discovered over a thousand planets around other stars.