Leopards can change their spots. Researchers using specially modified camera traps have revealed the black leopard’s spots. The research, led by Laurie Hedges, was carried out during his Masters research degree in the School of Geography at The University of Nottingham Malaysia Campus. 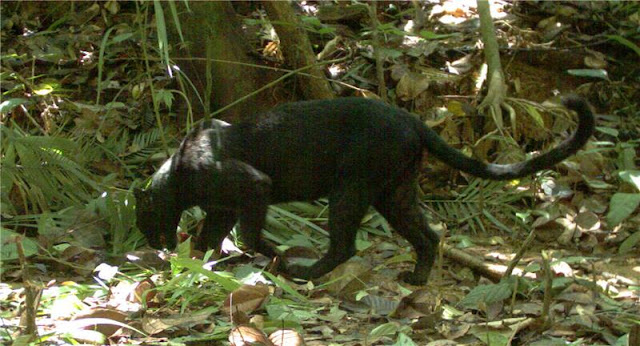 From the frozen forests of Russia to the scorching sands of the Kalahari Desert, leopards are the most widely distributed large cat on earth. Their iconic spotted coat has been admired and coveted by humans for millennia. But in one part in their vast range - the Malay Peninsula - leopards are almost entirely black in colour.

By modifying the infrared flash on automatic camera traps and forcing them into ‘night mode’ a team of wildlife experts has revealed the black leopard’s spots. 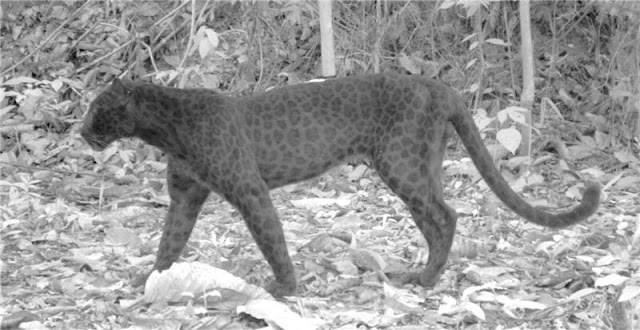 This research, led by Laurie Hedges during his Masters research degree in the School of Geography at The University of Nottingham Malaysia Campus (UNMC), has been published in the Journal of Wildlife Management will provide scientists with a new tool to help save this unique and endangered animal.

Camera traps are increasingly being used to study rare and elusive wildlife, particularly in tropical rainforests. But a simple tweak of the camera traps has produced astounding images and video of black leopards – and their spots. With infrared flash, the seemingly ‘black’ leopards suddenly showed complex patterns of spotting. The project was a team effort involving UNMC, the conservation organisation Rimba, WWF-Malaysia, the James Cook University in Australia and the Department of Wildlife and National Parks Peninsular Malaysia.

Laurie said: “This is perhaps the only known example of a wild mammal with virtually an entire population composed of black individuals and scientists have no idea why it predominates in the Malay Peninsula. Understanding how Malaysia’s leopards are faring in an increasingly human-dominated world is vital.”

Gopalasamy Reuben Clements, Honorary Assistant Professor at UNMC’s School of Geography, said: “Most automatic cameras have an infrared flash, but it’s only activated at night. By blocking the camera’s light sensor we can fool the camera into thinking it is night even when it is day, so it always flashes.”

The black coloration known as melanism – the over development of dark-coloured pigment in the skin and the opposite of albinism – makes it nearly impossible to identify individual animals. For this reason leopard populations in Peninsular Malaysia have been difficult to study for large carnivore researchers. Having revealed their spots field ecologists can now identify different animals and begin to estimate the population size of the species.

Mark Rayan Darmaraj, who manages a WWF-Malaysia tiger conservation project, said: “Because their uniformly black colour prevented us from identifying individual animals and thereby estimating their population sizes very little was known about leopards in Malaysia.”

The researchers tested the technique in the Kenyir wildlife corridor in north-eastern Peninsular Malaysia.

Laurie said: “We found we could accurately identify 94 per cent of the animals. This will allow us to study and monitor this population over time, which is critical for its conservation.”

The researchers now hope to use their new method to study black leopards elsewhere.

Ahimsa Campos Arceiz, from the School of Geography at UNMC, said: “Some places in Peninsular Malaysia where I have used automatic cameras have lots of prey and forest cover but evidently very few leopards.”

William Laurance from the James Cook University said; “Many dead leopards bearing injuries inflicted by wire snares have been discovered in Malaysia.”

Leopard skins and body parts are increasingly showing up in wildlife trading markets in places such as on the Myanmar-China border. At the same time, suitable leopard habitats are disappearing faster in Malaysia than perhaps anywhere else in the world, as forests are felled for timber and replaced with oil palm and rubber plantations.

Laurie Hedges works as a researcher in the forests of northern Malaysia, conducting primary research on carnivores, big and small. Since 2014 he has been working as 'Head of Monitoring' on the project Harimau Selamanya which aims to assess the population status of tigers in a region of Peninsular Malaysia. This is a partnership between the organisations Rimba and Panthera.