In Coma Cluster Dead Galaxies May Be Packed With Dark Matter

Galaxies in a cluster roughly 300 million light years from Earth could contain as much as 100 times more dark matter than visible matter, according to an Australian study.

The research, published today, used powerful computer simulations to study galaxies that have fallen into the Coma Cluster, one of the largest structures in the Universe in which thousands of galaxies are bound together by gravity.

This artist's impression of the 'quenching' process shows how a normal blue (star-forming) galaxy lost its gas while falling into the Coma Cluster very early on in its formation. 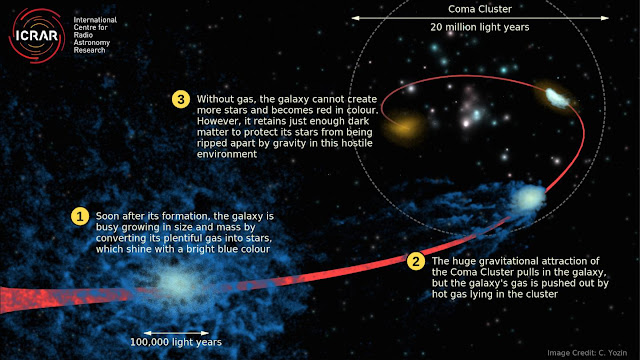 "It found the galaxies could have fallen into the cluster as early as seven billion years ago, which, if our current theories of galaxies evolution are correct, suggests they must have lots of dark matter protecting the visible matter from being ripped apart by the cluster."

Dark matter cannot be seen directly but the mysterious substance is thought to make up about 84 per cent of the matter in the Universe.

International Centre for Radio Astronomy Research PhD student Cameron Yozin, who led the study, says the paper demonstrates for the first time that some galaxies that have fallen into the cluster could plausibly have as much as 100 times more dark matter than visible matter.

Yozin, who is based at The University of Western Australia, says the galaxies he studied in the Coma Cluster are about the same size as our own Milky Way but contain only one per cent of the stars. 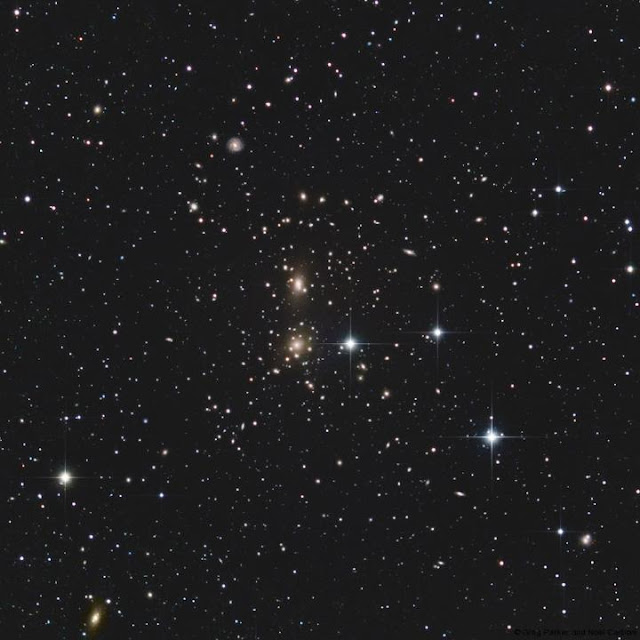 He says the galaxies appear to have stopped making new stars when they first fell into the cluster between seven and ten billion years ago and have been dead ever since, leading astrophysicists to label them "failed" galaxies.

This end to star formation is known as "quenching".

"Galaxies originally form when large clouds of hydrogen gas collapse and are converted to stars--if you remove that gas, the galaxy cannot grow further," Yozin says.

"Falling into a cluster is one way in which this can happen. The immense gravitational force of the cluster pulls in the galaxy, but its gas is pushed out and essentially stolen by hot gas in the cluster itself.

"For the first time, my simulations have demonstrated that these galaxies could have been quenched by the cluster as early as seven billion years ago.

"They have however avoided being ripped apart completely in this environment because they fell in with enough dark matter to protect their visible matter."

This research was motivated by the recent observational discovery of these galaxies by an American and Canadian team led Professor Pieter van Dokkum of Yale University.

Using the data the North American team published last year, Yozin was able to create computer simulations to model how the galaxies evolved into what we can see today.

Citation: 'The quenching and survival of ultra-diffuse galaxies in the Coma cluster' in Monthly Notices of the Royal Astronomical Society. Published online on 20/7/2015 at: http://mnras.oxfordjournals.org/lookup/doi/10.1093/mnras/stv1073
on July 20, 2015