Marine life cultivates half of the summer cloud droplets over the Southern Ocean.

How clouds form and how they help set the temperature of the earth are two of the big remaining questions in climate research. Now, a study of clouds over the world's remotest ocean shows that ocean life is responsible for up to half the cloud droplets that pop in and out of existence during summer.

The exact boundaries of the Southern Ocean are as up in the air as its many clouds. 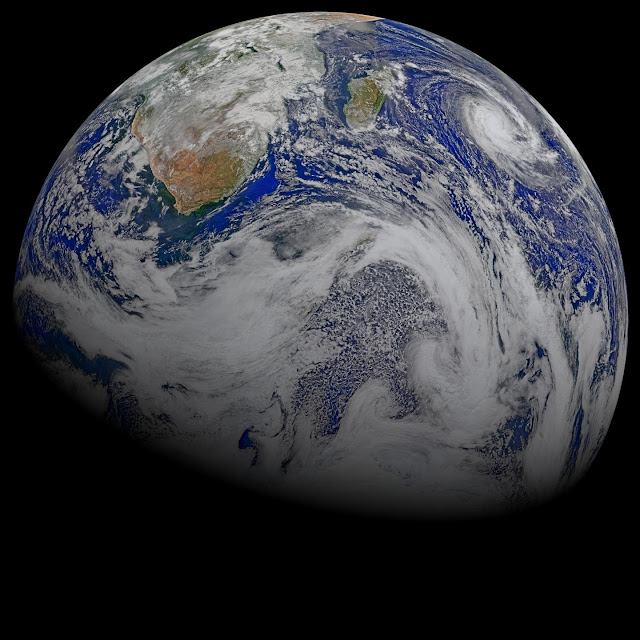 The study, which appears online July 17 in Science Advances, combines computer modeling with satellite data over the Southern Ocean, the vast sea surrounding Antarctica. It reveals how tiny natural particles given off by marine organisms -- airborne droplets and solid particles called aerosols - nearly double cloud droplet numbers in the summer, which boosts the amount of sunlight reflected back to space. And for the first time, this study estimates how much solar energy that equates to over the whole Southern Ocean.

"It is a strong effect," said climate scientist Susannah Burrows at the Department of Energy's Pacific Northwest National Laboratory. "But it makes sense because most of the area down there is ocean, with strong winds that kick up a lot of spray and lots of marine microorganisms producing these particles. And continental aerosol sources are mostly so far away that they only have a limited impact. Really the marine aerosols are running the show there."

Burrows and co-author Daniel McCoy at the University of Washington worked with other colleagues from the University of Leeds, Los Alamos National Laboratory, UW and PNNL to explore the atmospheric show-runners.

Although the Southern Ocean's borders have yet to be settled on by the International Hydrographic Organization, it comprises the southernmost parts of the Atlantic, Pacific and Indian Oceans, and is one of the cloudiest places on Earth. Important to the Southern Hemisphere's atmospheric and oceanic circulation, Southern Ocean clouds might also help determine how sensitive Earth is to the accumulation of greenhouse gases in its atmosphere.

But to understand that climate sensitivity, scientists need to improve their understanding of how tiny aerosol particles brighten clouds by serving as seeds for cloud droplets. Over land, aerosols arise from vegetative matter, pollution, and dust. Sea spray shoots sea salt -- a large source of ocean aerosols -- into the atmosphere, but marine organisms also produce aerosols, most of which evaporate into the air.

Aerosols have their own issues. Sea salt is one aerosol, and the ocean harbors marine organisms called phytoplankton that ultimately yield two more kinds of aerosols important to cloud formation -- sulfates and organic matter aerosols.

Previous studies, however, only examined how cloud droplet numbers correlated with chlorophyll -- an easy-to-measure molecule involved in photosynthesis that gives plants their green color -- as a proxy for marine life and were unable to nail down the individual roles of actual aerosols.

To flesh out the role of different aerosols, Burrows and colleagues used computer models to simulate both organic matter and sulfates, as well as sea salt. In addition, Burrows, McCoy and colleagues turned to a new set of satellite measurements of cloud droplets. The data set fixes the seasonal issues with the Southern Ocean and covers the latitudes between 35 degrees south and 55 degrees south.

"Satellite data allows us to observe events that occur over the course of months and on a scale of thousands of kilometers in the remotest regions on the planet," said UW's McCoy. "It really gives us an unparalleled glimpse of the Earth System's complexity."

An analysis of this model suggested that sea salt was the biggest source of aerosols in the ocean, contributing the most aerosols around which cloud droplets formed. And it was also the most uniform, contributing about the same number all year round.

The organic matter and sulfate aerosols, however, yielded more cloud droplets over summer than winter, as expected since the ocean receives more sunlight for organisms to grow in the summer. The sulfates, in addition, had a bigger effect than organic matter.

"The return of light in the summer ignites an amazing flurry of activity in phytoplankton communities across the Southern Ocean. This seasonality leads to an enhancement in cloud brightness when it will be able to reflect the most sunlight," said UW's McCoy.

Lastly, the scientists also found that sulfates and organic matter work to some extent independently of each other to increase the concentration of cloud droplets.

Overall, the aerosols given off by marine organisms almost doubled the cloud droplet concentration during the summer. This in turn increased the amount of sunlight reflected back into space by about 4 watts per square meter over the course of the year. Understanding the amount of energy that clouds over the Southern Ocean reflect might help researchers assess how well climate models are able to capture the effects of these marine particles on clouds.

"Phytoplankton in the oceans are a really important source for cloud-droplet-forming aerosols in remote marine air, and we can see the effect they have on clouds is big," said Burrows. "Southern Ocean clouds play a large role in the global climate, and hopefully this will help us get a better sense of how sensitive the Earth is to greenhouse gases."

Because it's harder to see the effects of marine aerosols in other parts of the world, the researchers will be able to use what they've learned about the mechanism and strength of the aerosol interactions with clouds to apply to studies in other regions.

This work was supported by the Department of Energy Office of Science, NASA, Department of Defense, and the National Science Foundation.