"Frozen" Recipe for Extraterrestrial Vitamin B3

Vitamin B3 could have been made on icy dust grains in space, and later delivered to Earth by meteorites and comets, according to new laboratory experiments by a team of NASA-funded researchers. Vitamin B3, also known as niacin or nicotinic acid, is used to build NAD (nicotinamide adenine dinucleotide), which is essential to metabolism and probably ancient in origin. The result supports a theory that the origin of life may have been assisted by a supply of biologically important molecules produced in space and brought to Earth by comet and meteor impacts.

This is an artist's concept of a protoplanetry disk surrounding a forming star that is ejecting jets of material (yellow beams). Such disks contain countless tiny dust grains, many of which become incorporated into asteroids, comets, and planets.

The new work builds on earlier research by the team in which they analyzed carbon-rich meteorites and discovered that vitamin B3 was present at concentrations ranging from about 30 to 600 parts-per-billion. In that work, the team performed preliminary laboratory experiments that showed vitamin B3could be made from a simpler building-block organic molecule called pyridine in carbon dioxide ice under conditions that simulated the environment in space.

The new experiments made the simulation more realistic by adding water ice to the mixture and using amounts closer to what is expected for interstellar ices and comets. The team found that even with the addition of water, the vitamin could be made under a wide variety of scenarios where the water ice abundance varied by up to ten times.

This is an artist's concept of a nebula containing gas, dust, and asteroids that will later form stars and planets.

"We found that the types of organic compounds in our laboratory-produced ices match very well to what is found in meteorites," said Karen Smith of NASA's Goddard Space Flight Center in Greenbelt, Maryland. "This result suggests that these important organic compounds in meteorites may have originated from simple molecular ices in space. This type of chemistry may also be relevant for comets, which contain large amounts of water and carbon dioxide ices. These experiments show that vitamin B3 and other complex organic compounds could be made in space and it is plausible that meteorite and comet impacts could have added an extraterrestrial component to the supply of vitamin B3 on ancient Earth."

Smith, who is lead author of a paper on this research published online June 17, 2015 in Chemical Communications, performed the work with her team at NASA Goddard, including her postdoctoral research advisor, Perry Gerakines of NASA Goddard. "This work is part of a broad research program in the field of Astrobiology at NASA Goddard," Gerakines said. "We are working to understand the origins of biologically important molecules and how they came to exist throughout the Solar System and on Earth. The experiments performed in our laboratory demonstrate an important possible connection between the complex organic molecules formed in cold interstellar space and those we find in meteorites."

Exploding stars (supernovae) and the winds from red giant stars near the end of their lives produce vast clouds of gas and dust. Solar systems are born when shock waves from stellar winds and other nearby supernovae compress and concentrate a cloud of ejected stellar material until dense clumps of that cloud begin to collapse under their own gravity, forming a new generation of stars and planets.

These clouds contain countless dust grains. Just as frost forms on car windows during cold, humid nights, carbon dioxide, water, and other gases form a layer of frost on the surface of these grains. Radiation in space powers chemical reactions in this frost layer to produce complex organic molecules, possibly including vitamin B3. The icy grains become incorporated into comets and asteroids, some of which impact young planets like ancient Earth, delivering the organic molecules contained within them.

The researchers tested this theory by simulating the space environment in the Cosmic Ice Laboratory at NASA Goddard. An aluminum plate cooled to around minus 423 degrees Fahrenheit (minus 253 Celsius) was used to represent the frigid surface of an interstellar dust grain. The plate was chilled in a vacuum chamber to replicate space conditions, and gases containing water, carbon dioxide, and pyridine were released into the chamber, where they froze onto the plate. The plate was then bombarded with protons at about 1 million volts from a particle accelerator to simulate space radiation.

A picture of the aluminum plate with a chemical deposit on it. 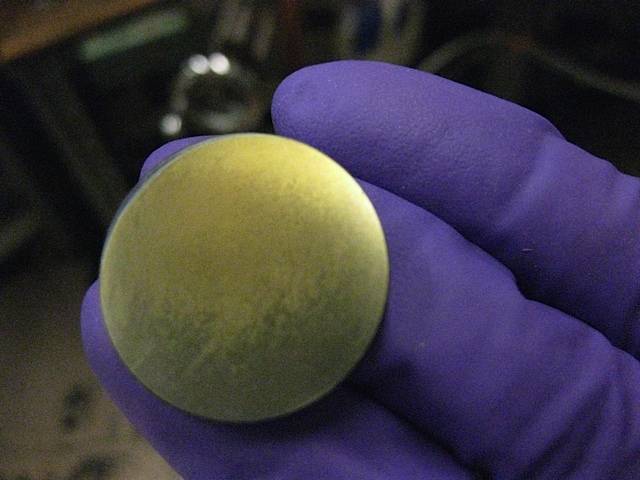 The team performed an initial analysis of the contents of the frozen layer by shining infrared light on it to identify absorption patterns – certain molecules absorb infrared light at specific colors, or frequencies. The plate was then heated to room temperature so the ice residue could be analyzed in greater detail at Goddard's Astrobiology Analytical Laboratory. The team found that this experiment produced a variety of complex organic molecules, including vitamin B3.

Observations from the European Space Agency's Rosetta mission, now in orbit around Comet 67P/Churyumov-Gerasimenko, might add more support to the theory that comets brought organic matter to Earth. "Rosetta could help validate these experiments if it finds some of the same complex organic molecules in the gases released by the comet or in the comet’s nucleus," said Smith.

This work was supported by a NASA Postdoctoral Program Fellowship administered by Oak Ridge Associated Universities through a contract with NASA, the NASA Astrobiology Institute (NAI) via the Goddard Center for Astrobiology (GCA), and the NASA Cosmochemistry Program. NASA's Ames Research Center in Mountain View, California, administers the NAI.