The face of a young man dating from the Copper Age, whose skeleton was discovered at Boatbridge Quarry in Thankerton, has been recreated by experts at the University of Dundee.

The face of Thankerton Man is on show to the public at the newly opened Biggar & Upper Clydesdale Museum. 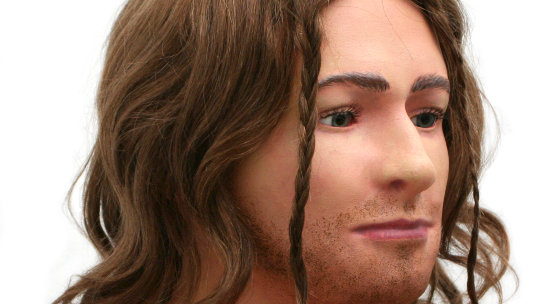 His skeleton was found in a stone cist at Boatbridge Quarry, Thankerton in 1970. He was unusually tall, thought to be aged between 18 and 25, and found lying in a crouched position. The remains were radiocarbon dated to between 2460BC and 2140 BC.

The cist contained a finely-decorated Beaker which had held food or drink for the deceased’s journey into the Afterlife. The pot and skeleton are curated by National Museums Scotland.

“Given its age, the skeleton of Thankerton Man was in excellent condition, which allowed us to get a strong impression of how he may have looked,” said Caroline Erolin, Lecturer in Forensic and Medical Art at CAHID.

“Once we built the basic shape of his face we then looked at historical data to get a better idea of how a man would have looked at that time. For instance, we know they had the ability to shave.”

The estimated height of the man was around 1.8 metres (5 feet 11 inches), which is regarded as tall in Copper Age terms.

Dr Alison Sheridan, Principal Curator of Early Prehistory at National Museums Scotland, who provided archaeological advice, adds “This is a magnificent piece of work that really brings the past to light. It has spurred us on to arrange the DNA analysis of this man’s remains.”

A new free online course launched by the University of Dundee is set to give the public further insight into the work of CAHID.

`Identifying The Dead: forensic science and human identification’ is a MOOC, or massive open online course, where anyone can sign up to take the six-week course. It has been launched on the FutureLearn platform.

Contacts and sources:
University of Dundee
on July 28, 2015