A ‘pill on a string’ developed by researchers at the University of Cambridge could help doctors detect oesophageal cancer – cancer of the gullet – at an early stage, helping them overcome the problem of wide variation between biopsies, suggests research published today in the journal Nature Genetics


The ‘Cytosponge’ sits within a pill which, when swallowed, dissolves to reveal a sponge that scrapes off cells when withdrawn up the gullet. It allows doctors to collect cells from all along the gullet, whereas standard biopsies take individual point samples. 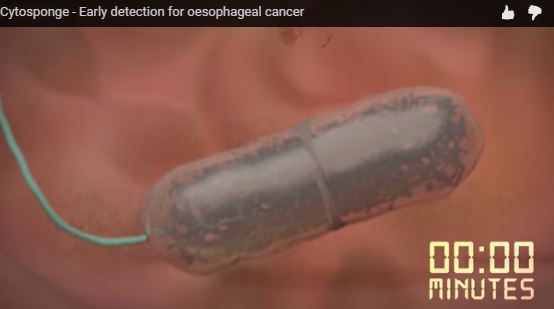 
Oesophageal cancer is often preceded by Barrett’s oesophagus, a condition in which cells within the lining of the oesophagus begin to change shape and can grow abnormally. The cellular changes are cause by acid and bile reflux – when the stomach juices come back up the gullet. Between one and five people in every 100 with Barrett's oesophagus go on to develop oesophageal cancer in their life-time, a form of cancer that can be difficult to treat, particularly if not caught early enough.

At present, Barrett's oesophagus and oesophageal cancer are diagnosed using biopsies, which look for signs of dysplasia, the proliferation of abnormal cancer cells. This is a subjective process, requiring a trained scientist to identify abnormalities. Understanding how oesophageal cancer develops and the genetic mutations involved could help doctors catch the disease earlier, offering better treatment options for the patient.

An alternative way of spotting very early signs of oesophageal cancer would be to look for important genetic changes. However, researchers from the University of Cambridge have shown that variations in mutations across the oesophagus mean that standard biopsies may miss cells with important mutations. A sample was more likely to pick up key mutations if taken using the Cytosponge, developed by Professor Rebecca Fitzgerald at the Medical Research Council Cancer Unit at the University of Cambridge.

“The trouble with Barrett’s oesophagus is that it looks bland and might span over 10cm,” explains Professor Fitzgerald. “We created a map of mutations in a patient with the condition and found that within this stretch, there is a great deal of variation amongst cells. Some might carry an important mutation, but many will not. If you’re taking a biopsy, this relies on your hitting the right spot. Using the Cytosponge appears to remove some of this game of chance.”

The researchers found patterns of mutations in the genome – where one ‘letter’ of DNA might change to another, for example from a C to a T – that provided a ‘fingerprint’ of the causes of the cancer. Similar work has been done previously in lung cancer, where it was shown that cigarettes leave fingerprints in an individual’s DNA. The Cambridge team found fingerprints which they believe are likely to be due to the damage caused to the lining of the oesophagus by stomach acid splashing onto its walls; the same fingerprints could be seen in both Barrett’s oesophagus and oesophageal cancer, suggest that these changes occur very early on the process.

Even in areas of Barrett’s oesophagus without cancer, the researchers found a large number of mutations in their tissue – on average 12,000 per person (compared to an average of 18,000 mutations within the cancer). Many of these are likely to have been ‘bystanders’, genetic mutations that occurred along the way but that were not actually implicated in cancer.

The researchers found that there appeared to be a tipping point, where a patient would go from having lots of individual mutations, but no cancer, to a situation where large pieces of genetic information were being transferred not just between genes but between chromosomes.

Co-author Dr Caryn Ross-Innes adds: “We know very little about how you go from pre-cancer to cancer – and this is particularly the case in oesophageal cancer. Barrett’s oesophagus and the cancer share many mutations, but we are now a step closer to understanding which are the important mutations that tip the condition over into a potentially deadly form of cancer.”

The research was funded by the Medical Research Council and Cancer Research UK.