"Neutrons which don't reach the ground do reach airline altitude," said Adrian Melott, professor of physics and astronomy at the University of Kansas. "Flight crews get a lot more radiation dose from neutrons. In fact, during solar particle events, airplanes are diverted away from the North Pole, where a lot more cosmic rays come down." 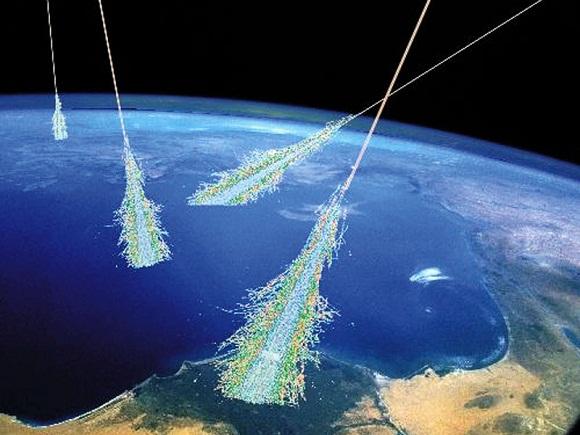 But could these cosmic rays pose hazards even at sea level? In recent years, research has suggested congenital birth defects down on Earth's surface could be caused by these "solar particle events" -- spikes in cosmic rays from the sun that touch off the northern lights and sometimes hamper communications or the electric power grid.

Now, a new NASA-funded investigation has found radiation from solar events is too weak to cause worry at ground level. Results have just been published in the Journal of Geophysical Research and hailed as one of three "Editor's Choice" publications for the first quarter of 2015 by Space Weather.

"We looked at two different studies," said co-author Melott. "Both of them indicated a connection between cosmic rays and the rate of birth defects. One also associated mutations in cells growing in a petri dish with a 1989 solar particle event."

But Melott and colleagues Andrew C. Overholt of MidAmerica Nazarene University and Dimitra Atri of the Blue Marble Space Institute of Science have calculated the dose of radiation from a solar particle event to be less than a visit to the doctor might necessitate.

"We have a contradiction," Melott said. "Our estimates suggest that the radiation on the ground from these solar events is very small. And yet the experimental evidence suggests that something is going on that causes birth defects. We don't understand this, which is good. Something one doesn't understand is a pointer to an interesting scientific problem."

Melott and his co-authors looked at how cosmic rays from the sun create hazardous "secondaries" by reacting with the Earth's atmosphere.

"Cosmic rays are mostly protons," he said. "Basically, they are the nuclei of atoms -- with all the electrons stripped off. Some come from the sun. Others come from all kinds of violent events all over the universe. Most of the ones that hit the Earth's atmosphere don't reach the ground, but they set off 'air showers' in which other particles are created, and some of them reach the ground."

The air showers pose the most serious threat for the health of humans and other biology on the Earth's surface via "ionizing radiation," according to the researcher.

"Ionizing radiation is any radiation that can tear apart an atom or a molecule. It can affect life in many ways, causing skin cancer, birth defects and other things. Normally, about one-sixth of the penetrating radiation we get down near sea level is from secondaries from cosmic rays."

The authors looked carefully at two forms of radiation formed by solar particle events -- muons and neutrons -- finding that muons are the most dangerous to biology at the Earth's surface.

"Muons are a kind of heavy cousin of the electron," Melott said. "They're produced in great abundance by cosmic rays and are responsible for most of the radiation we get on the ground from cosmic rays. Neutrons can do a lot of damage. However, very few of them ever reach the ground. We checked this because some of them do reach the ground. We found that they're likely responsible for a lot less damage than muons, even during a solar particle event."

Of particular interest to the authors was a massive dose of solar radiation around the years 773-776 A.D.

"Carbon-14 evidence was found in tree rings in 2012 that suggests a big radiation dose came down around 775, suggesting a huge solar particle event, at least 10 times larger than any in modern times," Melott said. "Our calculations suggest that even this was mostly harmless, but maybe there is something wrong with our assumptions. We used ordinary understandings of how muons may cause damage, but perhaps there is some new physics here which makes the muons more dangerous."

The researcher said the next step in the investigation should be honing an understanding of how much exposure to muons DNA can withstand.