The so-called failed stars, which are difficult to detect and also remain hard to classify, are too massive to be planets but physicists from the Universities of Sheffield and Oxford have revealed that they host powerful auroras just like Earth.

The international team of researchers made the discovery by observing a brown dwarf 20 light years away using both radio and optical telescopes. Their findings provide further evidence that suggests these stars act more like supersized planets. 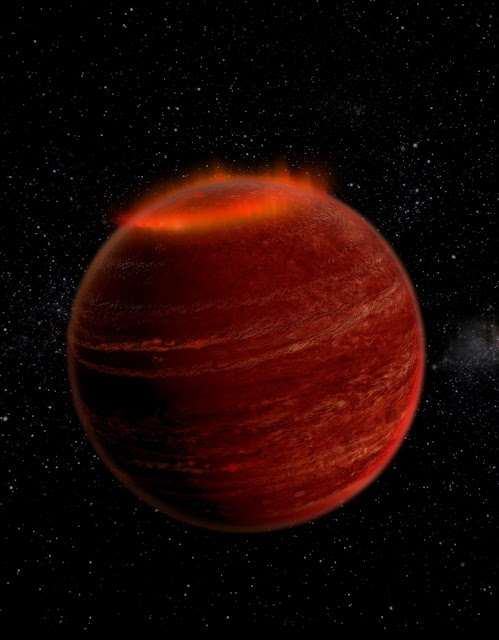 Dr Stuart Littlefair, from the University of Sheffield's Department of Physics and Astronomy, said: "Brown dwarfs span the gap between stars and planets and these results are yet more evidence that we need to think of brown dwarfs as beefed-up planets, rather than "failed stars".

"We already know that brown dwarfs have cloudy atmospheres - like planets - although the clouds in brown dwarfs are made of minerals that form rocks on Earth now we know brown dwarfs host powerful auroras too."

He added: "Sometimes the best thing about a scientific result is simply the thrill of discovering something exciting and cool. The northern lights on Earth are one of the most spectacular and beautiful things you can see.

"I've always wanted to see them, but have never got the chance. It's particularly ironic that I got to discover an auroral light show which is vastly more powerful and many light years away!"

During the study the international research team, led by Professor Gregg Hallinan from the California Institute of Technology, conducted an extensive observation campaign of a brown dwarf called LSRJ1835+3259.

Using the JVLA they detected a bright pulse of radio waves that appeared as the brown dwarf rotated around. The object rotates every 2.84 hours, so the team were able to watch nearly three full rotations over the course of a single night.

The astronomers worked with the Hale Telescope and observed the brown dwarf varied optically on the same period as the radio pulses. The team found that the object's brightness varied periodically, indicating that there was a bright feature on the brown dwarf's surface. Dr Garret Cotter, from the University of Oxford, who also took part in the study said: "It was incredibly exciting to track the optical light form the aurora during the night with the Hale Telescope in California, one of the most venerable telescopes in the world, while simultaneously tracking the radio emission with the JVLA, one the world's newest radio telescopes."

Finally, the researchers used the Keck telescopes to precisely measure the brightness of the brown dwarf over time which was no simple feat given that these objects are extremely faint, many thousands of times fainter than our own Sun. The astronomers determined that the bright optical feature was likely to be caused by electrons hitting the hydrogen-dominated atmosphere of the brown dwarf to produce auroras.

The findings from the study, published in the journal Nature offer astronomers a convenient stepping stone for further study into exoplanets, planets orbiting stars other than our own sun.

Dr Cotter said: "In science, new knowledge often challenges our understanding. We know how controversial the situation was with Pluto, where astronomers had to look hard to try to decide if it is fundamentally one of the major planets of the solar system, or the first of the Kuiper Belt objects. Now, up at the other end of the size scale, we are challenged by seeing objects that traditionally would have been classified as stars, but seem to be showing more and more properties that make them look like super-sized planets."

Contacts and sources:
Amy Pullan
University of Sheffield
on July 29, 2015