In a baboon group, any member can set the direction - not just the highest-ranking animal

Baboons live together in hierarchical groups. However, important decisions are not dictated by the highest-ranking group members but are instead made democratically. This was discovered by a team of scientists including Iain Couzin from the Max Planck Institute for Ornithology in Radolfzell.

The researchers monitored the movements of a baboon community using GPS devices with to-the-second precision. This enabled them to observe how the animals make decisions and the direction in which the group moves. The process is triggered by individuals who propose a direction. If opinions are divided, the undecided baboons follow the majority. This process is entirely democratic and takes place irrespective of which direction the dominant animals have chosen.

No squabbling on holidays: baboons make democratic decisions about their travel routes. 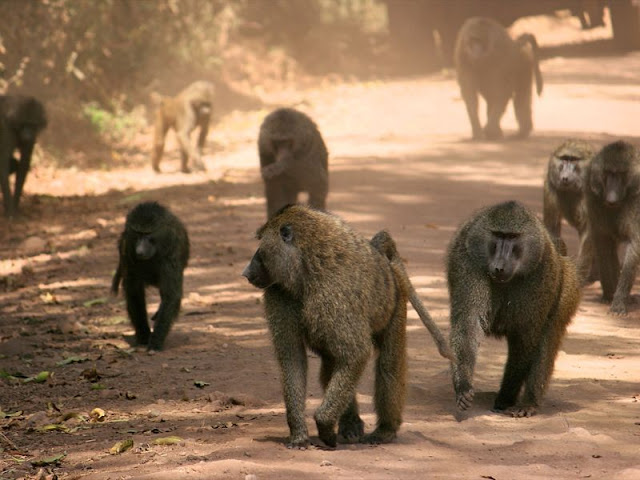 Olive baboons are incredibly agile. It is practically impossible to follow them for long periods of time and observe their decision-making. This explains why researchers were previously unable to discover how the animals deal with conflicts of interest and who makes the decisions in the hierarchically structured groups. “What’s fascinating about baboons is that they do absolutely everything together and therefore always have to reach a compromise,” explains Iain Couzin.

The researchers attached GPS transmitters to the animals and documented the movements of each individual baboon. A computer then used this data to calculate how the monkeys decide on a direction during their forays through the Kenyan savannah. Some individuals propose a route by moving away from the group; the more of these initiators who purposefully chose the same direction, the greater the probability that the remainder of the group will follow them. The preference of the highest-ranking animal did not matter to the baboons. “The alpha animal did not therefore decide dictatorially, but the group instead makes democratic decisions,” says Couzin.

The situation where around the same number of animals wanted to head in different directions often arose. It then depended upon the angle between them. If this was less than 90° then the remaining animals chose the middle path. However, if the angle was greater, they selected one of the directions available based on the random principle.

Iain Couzin theoretically predicted this behaviour ten years ago but even he was a little surprised: “I am astonished that the predictions about an extremely complex community are so accurate. But it’s wonderful how everything has fitted together and that the observations have confirmed our calculations.”

The evaluation of the GPS data was extremely complicated and took several years. “It was difficult for us to understand when the baboons were trying to influence one another and when not,” Couzin points out. Couzin and his cooperation partners therefore flew to Kenya together to observe the animals in their natural habitat. “We would never have been able to develop our algorithm without these field studies, and without the algorithm we could never have understood how the decision-making process works,” Couzin sums up.

One part of the puzzle is nevertheless still missing - the influence of the terrain. The scientists are therefore now deploying a drone to produce a detailed, three-dimensional map from the air. Couzin explains: “We believe that information about the environment could provide us with very different insights into the animals’ social behaviour.”