A Landscape of Fear

A new collaborative study led by scientists at the University of Miami (UM) Rosenstiel School of Marine and Atmospheric Science & Abess Center for Ecosystem Science & Policy examined predator-prey interactions between tiger sharks and sea turtles off the Northwestern Atlantic Ocean.

The research team used long-term satellite tagging data from large tiger sharks and adult female loggerhead sea turtles, common prey of tiger sharks, to examine their movement patterns and evaluate if turtles modify their behaviors to reduce their chances of a shark attack when turtle and shark home ranges overlapped. 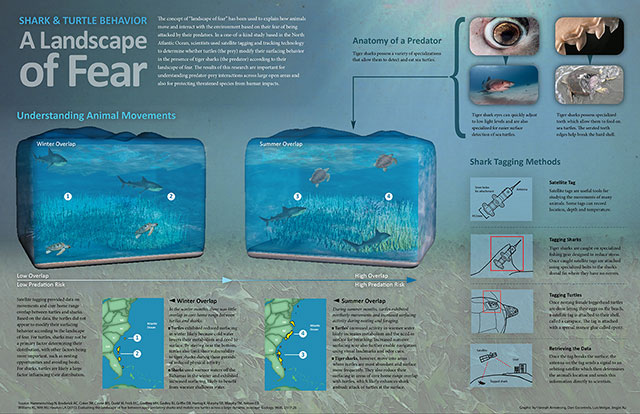 The study revealed that tiger sharks undergo seasonal movements to take advantage of turtles nesting off the Carolinas during the summer. Tiger sharks are ambush predators, primarily attack surfacing turtles from below. In theory, loggerhead turtles should reduce their exposure at the surface in regions of high habitat overlap with tiger sharks. However, surprisingly, the researchers found that when shark-turtle overlap in the study region was high, turtles did not alter surfacing behavior to risk avoidance. Whereas, sharks did exhibit modified surfacing behavior believed to enhance predation opportunity.

“We suggest that sharks may not be an important factor influencing the movements of turtles,” said Research Assistant Professor Neil Hammerschlag at the UM Rosenstiel School & Abess Center. “In fact, it is possible that the fishing of tiger sharks in our study area has reduced their populations to levels that no longer pose a significant threat to turtles at the individual level, with other factors becoming more important for turtles such as the need to avoid boat strikes, which is a huge threat to turtle survival.”

The study is one of the first to test if the “landscape of fear” model, a scientific theory that has been used to explain how animals move and interact with the environment based on their fear of being attacked by their predators, is applicable to large open marine systems involving wide-ranging species, like sharks and turtles.

"This one of the first studies to compare the large scale, long-term movements of sea turtles with their natural predators, tiger sharks,” said study co-author Lucy Hawkes of the University of Exeter’s Centre for Ecology and Conservation.

"These data are essential for setting and prioritizing marine protection for these species, which are both of conservation concern," said study co-author Matthew Witt of the University of Exeter’s Environment and Sustainability Unit.