23,000 Years Ago The First Americans Arrived in One Migration Wave

There is archaeological evidence of modern humans in the Americas by ca. 15 thousand years ago (KYA). However, there is still debate over exactly when and how many times the ancestors of present-day Native Americans entered the New World from Siberia.

The area around the confluence of the Silverthrone and Klinaklini Glaciers in southwestern British Columbia provides a glimpse into how the terrain traveled by Native Americans in Pleistocene times may have appeared. 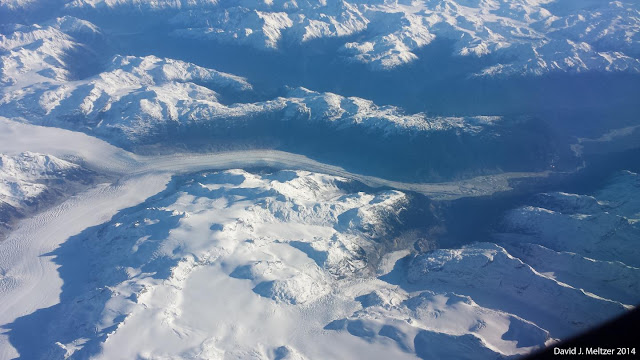 A large genome-scale study conducted by an international team headed by the Centre for GeoGenetics at the University of Copenhagen has now provided answers to these questions. The study reveals that the ancestors of all present-day Native Americans arrived in the Americas as part of a single migration wave, no earlier than 23 KYA. Within the Americas, the ancestral Native American pool diversified into two basal branches around 13 KYA.

The team also reports a later gene flow into some Native Americans from groups related to present-day East Asians and Australo-Melanesians. Finally, the results from this study show no support for certain historical Central and South American groups with distinctive cranial morphology being relicts of an early and separate migration into the Americas, as proposed by the 'Paleoamerican Model'. The results have just been published online in the leading scientific journal Science.

Classification of indigenous peoples of North America according to Alfred Kroeber

Although there is little disagreement in the scientific literature that the ancestors of present-day Native Americans originated in Siberia, debate over the demographic processes that led to the peopling of the Americas still persists.

We know through archaeological sites such as Monte Verde in Chile that humans were present in the Americas by ca. 15 KYA. However, when exactly did the first Native Americans cross over from Siberia into the New World? Did they arrive in a single wave or did successive migration waves give rise to the genetic diversity prevalent among present-day Native Americans?

Did they split from their Old World ancestors and immediately cross into the Americas or was there, as one genetic model suggests, an 'incubation' period in Beringia, the now-inundated land bridge that connected north-eastern Siberia to Alaska? And if they came in a single wave, when did the ancestral Native American population split into the genetic branches seen today among their descendants?

Tracing the initial migrations into the Americas

The area around the confluence of the Silverthrone and Klinaklini Glaciers in southwestern British Columbia provides a glimpse into how the terrain traveled by Native Americans in Pleistocene times may have appeared. Photograph by David J. Meltzer

The area around the confluence of the Silverthrone and Klinaklini Glaciers in southwestern British Columbia provides a glimpse into how the terrain traveled by Native Americans in Pleistocene times may have appeared. Photograph by David J. Meltzer

In order to develop a more detailed account of when and how the Americas were peopled, the team generated genomic data from several present-day Native American and Siberian populations, which are poorly represented in the genetic literature. They also sequenced ancient samples from across the Americas, spanning ca. 6,000 - 200 years ago, to trace the genetic structure over time.

"Our study presents the most comprehensive picture of the genetic prehistory of the Americas to date. We show that all Native Americans, including the major sub-groups of Amerindians and Athabascans, descend from the same migration wave into the Americas. This was distinct from later waves that gave rise to the Paleo-Eskimo and Inuit populations in the New World Arctic region," says Dr. Maanasa Raghavan, a postdoctoral researcher at the Centre for GeoGenetics and one of the lead authors of the study.

This initial migration of the ancestors of all present-day Native Americans happened no earlier than 23 KYA, according to the results from the latest study. This represents the split date of Native Americans from East Asian and Siberian populations and is very similar for both Amerindians and Athabascans, which confirms that both these groups arrived into the New World as part of the same migration.

"We applied several statistical methods that differ in modeling or utilize different information in the data. That we obtained consistent results across different methods is significant and reassuring," says Professor Yun Song at UC Berkeley, a co-author of the study.

It is likely that after diverging from Old World populations around 23 KYA, the ancestral Native Americans remained isolated in Beringia for ca. 8 KYA, given that the earliest archaeological evidence for humans in the Americas is around 15 KYA.

A timeline of the genomic landscape of the Americas

Since Amerindians and Athabascans were part of the same migration into the Americas, the current genetic differences observed between them would have emerged sometime after 23 KYA.

The team found evidence for a split in the ancestral Native American gene pool that lead to the formation of two distinct genetic branches, namely the 'northern' and 'southern' branches, and that this split occurred ca. 13 KYA. The 'northern' branch was found to be present in northern North America and included both northern Amerindian groups as well as Athabascans. The 'southern' branch, on the other hand, included Amerindians from southern North America and Central and South America.

"We can date this split so precisely in part because we previously have analyzed the 12.6 KYA remains of a boy associated with the first unique Native American culture - the Clovis culture. The first diversification of the ancestors of modern Native Americans happened in the Americas and likely just before or at the time of the appearance of the Clovis culture", says Professor Rasmus Nielsen from the Department of Integrative Biology at UC Berkeley, a co-author of the study.

When comparing the genetic affiliations of sequenced ancient samples from the Americas, the team found that several samples were genetically more closely related to modern-day populations from the same geographical location. This result indicates that there was a genetic and geographic continuity of Native American groups across the millennia in at least some parts of the Americas.

The study reports a signal of gene flow between some Native Americans and groups related to present-day East Asians and Australo-Melanesians, the latter including Papuans, Solomon Islanders and South East Asian hunter-gatherer groups. While the signal is weak, it presents an intriguing scenario of a distant Old World connection to Native Americans after their split from one another and after the latter had peopled the Americas.

"It's a surprising finding and it implies that New World population were not completely isolated from the Old World after their initial migration. We cannot say exactly how and when this gene flow happened, but one possibility is that it came through the Aleutian Islanders living off the coast of Alaska." says Lundbeck Foundation Professor Eske Willerslev from Centre for GeoGenetics at the Natural History Museum, University of Copenhagen, who headed the study.

A genetic relationship with the Australo-Melanesians, however weak, invokes a highly debated hypothesis in the literature that suggests, based on cranial morphology, that populations related to Australo-Melanesians were part of a separate migration that gave rise to the earliest Americans (Paleoamericans), who were later replaced by the ancestors of present-day Native Americans.

The current study undertook genomic analyses on historical Central and South American populations considered to be relicts of Paleoamericans, namely the Pericúes and Fuego-Patagonians, but found no evidence for them being closely related to Australo-Melanesians. On the contrary, the results show that they were genetically closest to present-day Native Americans, a finding supported by re-analysis of cranial morphological evidence.

"Our findings show that supposed Palaeoamerican relict populations, such as the Pericúes and Fuego-Patagonians, belong to the same population as present-day Native Americans and that the distinct cranial morphology of these groups is not a consequence of a distinct migration history." says Dr. Cristina Valdiosera, a postdoctoral researcher at the Centre for GeoGenetics and one of the lead authors of this study.

"With this study," says Professor David Meltzer of the Department of Anthropology at Southern Methodist University, a study co-author, "we are not only addressing key questions related to the peopling of the Americas, we are beginning to integrate the archaeological, anatomical and genetic evidence bearing on that process. The lines of evidence do not, as yet, fully converge: for example, was there a causal link between the Clovis expansion known archaeologically and the genetic divergence of the northern and southern branches? If so, how does the evidence of a pre-Clovis presence at sites such as Monte Verde fit in? As more archaeological sites and remains are dated and ancient and modern genomes are sequenced, we will be able to resolve these issues, and develop a more precise record of the colonization of what was then a truly New World."

Professor Eske Willerslev adds: "Our study seems to have challenged older hypotheses such as a Beringian incubation for Native American ancestors for tens of thousands of years; entrance to the Americas much earlier than the Last Glacial Maximum; and, independent migrations of Amerindians and Athabascan ancestors into the Americas. At the same time, we see surprises including genetic signals of East Asians and Australo-Melanesians, presumably coming in after the first migration wave."

Citation:  The paper Genomic evidence for the Pleistocene and Recent population history of Native Americans will be published online on Science Thursday 21. July 2015.
on July 22, 2015