Active galactic nuclei are the brightest objects in the universe. They are not lit up permanently, but rather ‘flicker’ extremely slowly. This insight helps ETH researchers better understand the influence these nuclei and black holes have on their host galaxy.

"Hanny's Voorwerp" (green, below) is an astronomical object that has been turned off around 200,000 year ago. Visible in the upper part is the spiral galaxy IC 2497. 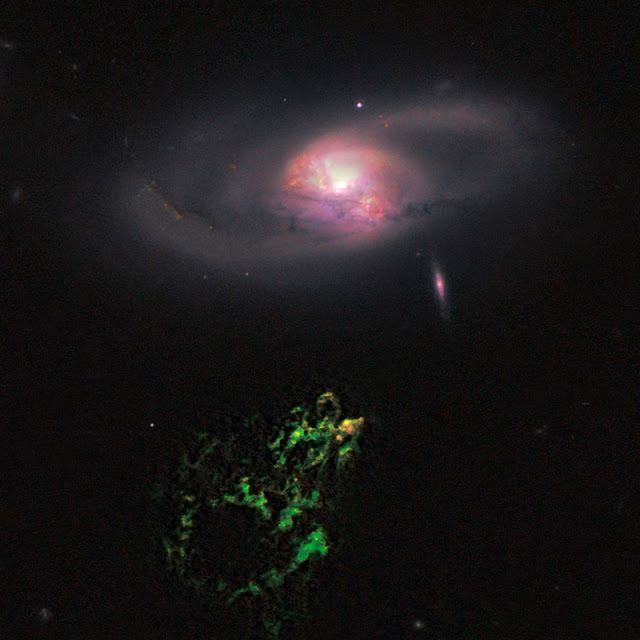 Supermassive black holes pull in gas with great force from their surroundings. As the gas rotates around the black hole, it becomes progressively hotter through friction and begins to radiate. This is how the brightest objects in the universe, active galactic nuclei (AGN), are formed. They often shine brighter than the hundreds of billions of stars in their galaxy. In the center of our home galaxy, the Milky Way there is also such a black hole that, according to some studies, shone as an AGN a few millions of years ago.

ETH Zurich researchers led by Professor Kevin Schawinski of the Institute for Astronomy reveal in their latest study that these AGN are not lit up permanently. Instead, they resemble a flickering lamp. In the current edition of Monthly Notices of the Royal Astronomical Society, ETH astronomers report for the first time that AGN ‘switch on and off’ every couple of hundred thousand years, a finding based on their observational data.

AGN emit radiation at all wavelengths from X-rays to radio, so telescopes can capture the X-ray radiation originating from the immediate vicinity of the AGN and also register visible light, albeit with a certain delay. It’s comparable to a gas lamp, which does not light up immediately when switched on.

Nuclei appear to be ‘switched off’

ETH researchers discovered in their extensive data collection of observed active galactic nuclei that about 5 percent appeared to be in a ‘switched-off’ state. This means that although they were detected by X-ray telescopes, they did not radiate the visible light typical of a ‘galactic gas lamp’.

The scientists concluded that if five percent of all observed AGN do not give off visible light, this means that the apparent switched-off state represents five percent, or a twentieth, of the total duration of an AGN light-dark phase. Put another way, it’s like taking a picture of a person every day of their life. At the end, there would be more pictures of their lengthy adult years than their brief adolescence – and in the same ratio as adulthood lasts much longer than adolescence.

Researchers knew from earlier theoretical work that the AGN switched-off state can be compared with adolescence, lasting approximately 10,000 years. This is the amount of time required for light to traverse a typical galaxy. This led to the conclusion that a complete AGN phase – the lifespan of a human in the analogy – lasts 20 times as long on average, or 200,000 years.

“This result is crucial in order to understand how an active galactic nucleus influences the surrounding galaxy,” says Schawinski, who led the study. Astrophysicists already knew that active galactic nuclei could accumulate gas over several billion years. However, no one knew whether they amassed enough gas over this period to light up.

“Now we know that light emitted by an active galactic nucleus resembles an energy-saving lamp that flickers on and off every 20 milliseconds,” Schawinski explains. In comparison to the hundreds of millions of years in which a galaxy’s nucleus remains active, 200,000 years represents a short period of time.

“The 200,000 years should be viewed as an approximation and it is a statistical average,” says Schawinski. That means that the AGN phase may last longer for one galaxy than another, but the length of time should amount to several hundred thousand years for all galaxies. This limitation may shed light on how active galactic nuclei intervene in the development of their host galaxy. For example, it is possible that radiation from an AGN heats up a collapsing gas cloud in which stars are formed. The heating delays or even prevents the collapse of the gas cloud and thus the formation of stars. However, the active galactic nucleus must light up long enough for this to happen. “Thanks to the estimate of the length of an AGN phase, we are one step closer to the answer to this question,” says Schawinski.