Why the Sun's Atmosphere Is Hotter Than Its Surface

How can the temperature of the Sun's atmosphere be as high as 1 million degrees Celsius when its surface temperature is only around 6000°C? By simulating the evolution of part of the Sun's interior and exterior, researchers from the Centre de Physique Théorique (CNRS/École polytechnique) and the Laboratoire Astrophysique, Interprétation - Modélisation (CNRS/CEA/Université Paris Diderot) have identified the mechanisms that provide sufficient energy to heat the solar atmosphere.

The Sun's surface and its mainly 'pepper-and-salt' magnetic field, except for the large sunspot regions, based on data from NASA's SDO satellite. 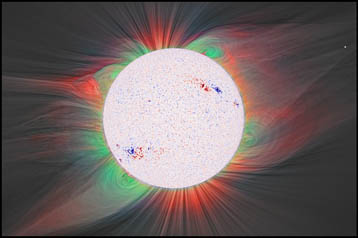 A layer beneath the Sun's surface, acting as a pan of boiling water, is thought to generate a small-scale magnetic field as an energy reserve which, once it emerges from the star, heats the successive layers of the solar atmosphere via networks of mangrove-like magnetic roots and branches[1]. This heating of the atmosphere, which contributes to generate the solar wind that fills the heliosphere, probably occurs in many other stars. These findings are published in the journal Nature dated 11 June 2015.

Magnified view of a small part of the modeled solar surface showing the temperature of the granulation cells obtained at the surface of the shallow pan of boiling plasma (hot/bright at the center of the cells and cool/dark at the edge), which is located just beneath the Sun's surface and generates the small-scale magnetic field at the surface. 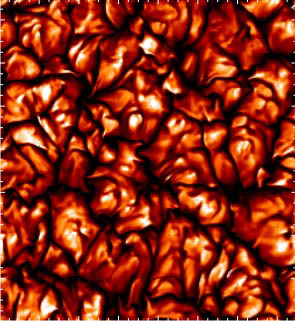 The Sun's temperature, which reaches around 15 million degrees Celsius in its core, steadily decreases with distance from the core, falling to 6000°C at its 'surface'. Logically, it should therefore continue to decline in the atmosphere. Instead, it rises to about 10,000°C in the chromosphere, and exceeds a million degrees Celsius in the corona. So what source of energy can heat the atmosphere and maintain it at such high temperatures? For around a century, this question puzzled astrophysicists, all the more so as it relates to the origin of the solar wind that affects the Earth.

Complete model showing the shallow pan of boiling plasma, near the solar surface, that generates the 'salt-and-pepper' magnetic field at the surface (blue/red). As the field emerges it creates a structure resembling a mangrove forest, which heats the various layers of the solar atmosphere. 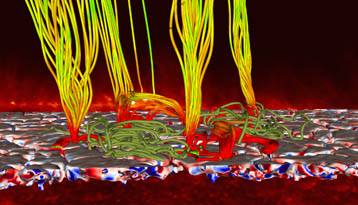 Although there was little doubt that part of the energy from the Sun's interior reached its outer layers, the exact mechanism remained a mystery. The researchers concentrated on the small-scale magnetic field, which, except for the sunspots, has a 'salt-and-pepper' appearance.

Using powerful numerical models run on computers at the Centre de Physique Théorique (CNRS/École Polytechnique) and GENCI at IDRIS-CNRS, the team performed a simulation for several hours, based on a model made up of several layers, one inside the Sun and the others in its atmosphere. The researchers observed that the thin layer under the Sun's surface actually behaves rather like a shallow pan containing boiling plasma[2], heated from below and forming 'bubbles' associated with granules.

The Sun's surface according to data from NASA's IRIS mission, showing the dynamic structure of the heated atmosphere in the background.

This boiling plasma soup generates a dynamo process that amplifies and maintains the magnetic field. As the field emerges from the surface, it takes on a salt-and-pepper appearance, forming concentrations dubbed 'mesospots' that are larger, fewer in number and more persistent, all of which is consistent with observations.

The scientists also discovered that a structure resembling a mangrove forest appears around the solar mesospots: tangled 'chromospheric roots' dive into the spaces between the granules, surrounding 'magnetic tree trunks' that rise up towards the corona and are associated with the larger-scale magnetic field.

Model of the solar atmosphere at high-resolution, showing the formation of intense electric currents rising up like flames.

The researchers' calculations show that, in the chromosphere, heating of the atmosphere results from multiple micro-eruptions in the mangrove roots that carry intense electric current, in pace with the 'bubbles' from the boiling plasma. They also discovered that larger but less numerous eruptive events take place in the neighborhood of the mesospots, although these are not able to heat the upper corona on a larger scale.

This eruptive process generates 'magnetic' waves along the tree trunks, rather like sound traveling along a plucked string. These waves then transport energy to the upper corona, which is heated by their progressive dissipation.

The scientists' calculations also show that as the ejected matter falls back towards the surface it forms tornadoes, which have actually been observed. Thin plasma jets near the tree trunks are also produced and are associated with recently discovered spicules[3]. All these phenomena, which have been ascertained individually but not explained, make up various energy channels produced by the boiling plasma, rather than the single source hitherto postulated.

The researchers found that the energy fluxes of their mechanisms match those required by all studies to maintain the temperature of the plasma in the solar atmosphere, namely 4 500 W/m2 in the chromosphere and 300 W/m2 in the corona.

[1] The magnetic field lines are structured like roots and branches.
2 Plasma, often called the fourth state of matter, here represents an electrically conducting fluid.
3 Spicule: a thin jet of matter that emerges from the chromosphere and enters the corona.