When galaxies collide, bright things happen in the universe.

Using the Hubble Space Telescope's infrared vision, astronomers have unveiled some of the previously hidden origins of quasars, the brightest objects in the universe. A new study finds that quasars are born when galaxies crash into each other and fuel supermassive, central black holes.

New research indicates that quasars are born when galaxies crash. 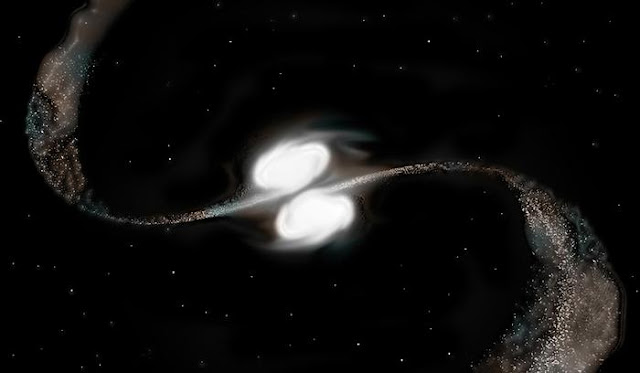 "The Hubble images confirm that the most luminous quasars in the universe result from violent mergers between galaxies, which fuels black hole growth and transforms the host galaxies," said C. Megan Urry, the Israel Munson Professor of Astronomy and Astrophysics at Yale University, and co-author of the study published online June 18 in The Astrophysical Journal.

"These mergers are also the sites of future black hole mergers, which we hope will one day be visible with gravitational wave telescopes," Urry said.

Quasars emit a light as bright as that of one trillion stars. Over the past two decades, researchers have concluded that the energy for quasars comes from supermassive black holes inside the cores of distant galaxies.

But where do the supermassive black holes get their fuel? It had been theorized previously that such energy could come from the merger of two galaxies. The new study confirms it by using Hubble's sensitivity at near-infrared wavelengths of light to see past the intense glow of the quasar, to the host galaxies themselves.

"The Hubble observations are telling us that the peak of quasar activity in the early universe is driven by galaxies colliding and then merging together," said Eilat Glikman of Middlebury College in Vermont, lead author of the study and a former Yale postdoctoral researcher. "We are seeing the quasars in their teenage years, when they are growing quickly and all messed up."

Glikman decided to look for "dust reddened quasars" in several ground-based infrared and radio sky surveys. These quasars are enveloped in dust, dimming their visible light.

Using Hubble's Wide Field Camera 3, Glikman looked at 11 such quasars from the peak of the universe's star-formation era, 12 billion years ago. "The new images capture the dust-clearing transitional phase of the merger-driven black hole scenario," Glikman said. "The Hubble images are both beautiful and descriptive."