The Battle of Waterloo: Why Does It Matter?

Professor Charles Esdaile, from the University of Liverpool Department of History, is the author of numerous works on the Napoleonic period including `Napoleon’s Wars: An International History.’

18 June – was the 200th anniversary of the Battle of Waterloo.

Over in Belgium at least 100,000 people were present at the ceremonies and re-enactments held on the battlefield. 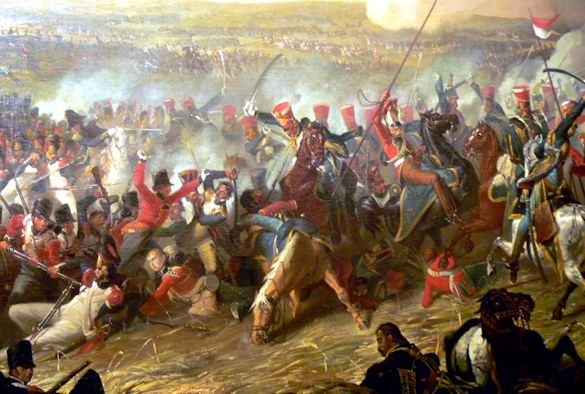 So why all the fuss? Why should we remember a day of horror marked by the most terrible extremes of human misery? To answer this, let me begin with a little history.

Defeated by a massive international coalition in 1814, Napoleon Bonaparte was sent into exile in Elba, but at the end of February 1815 he escaped and sailed to the south of France.

To use a Spanish analogy, he immediately ‘pronounced’ against the regime of the restored Louis XVIII whereupon the much disaffected army rallied en masse to his cause.

By 20 March Napoleon was back in Paris, and Louis in exile in Ghent, but the emperor was anything but secure: on the contrary, he was immediately declared an outlaw by the powers of Europe.

The Battle of Waterloo

Threatened with invasion from all sides, Napoleon struck at his nearest opponents – the Anglo-Dutch army of the Duke of Wellington and the Prussian army of Marshal Blucher – in the hope that a dramatic victory would cause his opponents to make peace, and the result was a four-day campaign that culminated in the complete defeat of the French at Waterloo. The emperor then abdicated, surrendered to the British and was sent off to exile in Saint Helena.

Why does it matter?

So much for the history, but why does it matter? The answer, quite simply, is that, to paraphrase Wellington, the only thing sadder than a battle won would have been a battle lost.

Engaging in counter-factual history is a dangerous business, but if there is one thing that we can be pretty certain of is that even had Napoleon had been victorious in the Waterloo campaign, he would simply have been defeated further down the line: he faced massive domestic opposition, was outnumbered by at least 3:1 and was well past his mental and physical best.

On top of this, there was no chance of significant popular support from elsewhere in Europe – by 1814 French rule was widely hated – while the coalition against Napoleon was rock solid. In short, all that would have happened had Napoleon won would have been that there would have been a lot more killing, a lot more misery and a lot more destruction and all for precisely the same result.

The reaction Waterloo provoked was so strong that it led to the first attempt in the history of the world to resolve disputes by the establishment of a structure for conciliation and negotiation (i.e. the Congress System), this alone is worth remembering it for.

However, at the same time, the bicentenary is also a useful moment for reflecting on the Napoleonic legend. To this day there are many people who see the emperor as an apostle of liberty, and, still worse, as witnessed by current programmes on BBC2 and Radio 4, there are still those who seek to defend such ideas.

In reality, however, Napoleon was nothing than a warlord who sought to create a colonial empire in the heart of Europe, and his downfall is therefore truly a moment to savour.”