"The Hubble observations are definitely telling us that the peak of quasar activity in the early universe is driven by galaxies colliding and then merging together," said Eilat Glikman of Middlebury College in Vermont. "We are seeing the quasars in their teenage years, when they are growing quickly and all messed up."

Discovered in the 1960s, a quasar (contraction of "quasi-stellar object") pours out the light of as much as one trillion stars from a region of space smaller than our solar system. It took more than two decades of research to come to the conclusion that the gusher of energy comes from supermassive black holes inside the cores of very distant galaxies.

The lingering question has been: How do these brilliant beacons turn on? Now Hubble has provided the best solution. "The new images capture the transitional phase in the merger-driven black hole scenario," Glikman said. "The Hubble images are incredibly beautiful." 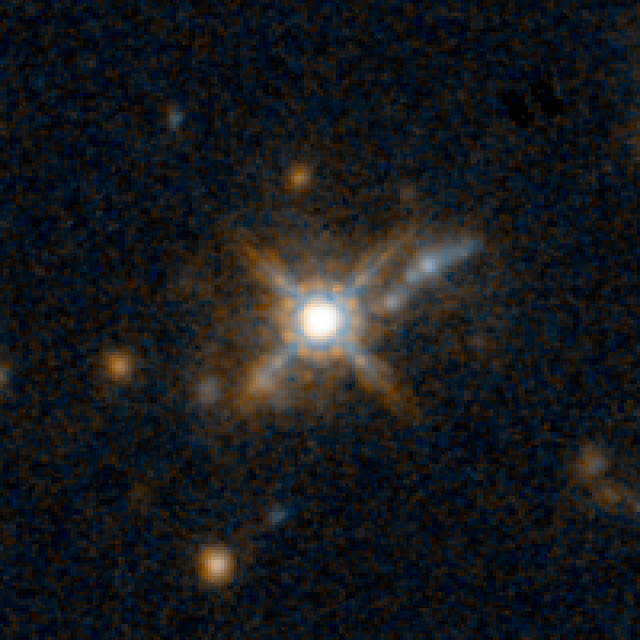 "We've been trying to understand why galaxies start feeding their central black holes, and galaxy collisions are one leading hypothesis. These observations show that the brightest quasars in the universe really do live in merging galaxies," said co-investigator Kevin Schawinski of the Swiss Federal Institute of Technology in Zurich.

Though it had been previously theorized that the mergers of two galaxies could do the trick, the overwhelming glow of the quasar drowns out the light of the accompanying galaxy, making the signs of mergers difficult to see.

Glikman came up with a clever way to use Hubble's sensitivity at near-infrared wavelengths of light to see the host galaxies. Nature played a helping hand by producing some quasars that are heavily shrouded in dust. The dust dims the quasar's visible light so that the underlying galaxy can be seen.

The quasars light up because the gravitational forces of the merger rob much of the angular momentum that keeps gas suspended in the disks of the colliding galaxies. The gas then falls directly toward the supermassive black hole. The accretion zone around the black hole is so engorged with fuel it converts it into a gusher of radiation that blazes across the universe.

Glikman looked for candidate "dust-reddened quasars" in several ground-based infrared and radio sky surveys. Active galaxies in this early phase of evolution are predicted to glow brightly across the entire electromagnetic spectrum, making them detectable in radio and near-infrared wavelengths that are not as easily obscured as other radiation.

She then used Hubble's Wide Field Camera 3 to take a detailed look at the best candidate targets. Glikman looked at the dust-reddened light of 11 ultra-bright quasars that exist at the peak of the universe's star-formation era, which was 12 billion years ago. The infrared capability of Hubble's Wide Field Camera 3 was able to probe deep into the birth of this quasar era.

The paper will be published in the June 18 issue of the Astrophysical Journal.

Glikman acknowledges the support of the Cottrell College Award through the Research Corporation for Science Advancement.