A new study has found that the massive Laurentide ice sheet that covered Canada during the last ice age initially began shrinking through calving of icebergs, and then abruptly shifted into a new regime where melting on the continent took precedence, ultimately leading to the sheet's demise.

Researchers say a shift in 'radiative forcing' began prior to 9,000 years ago and kicked the deglaciation into overdrive. The results are important, scientists say, because they may provide a clue to how ice sheets on Greenland and Antarctica may respond to a warming climate.

A study of the demise of the Laurentide Ice Sheet that once covered Canada may help scientists better understand shrinking ice fields today -- like this melting ice margin in Greenland. 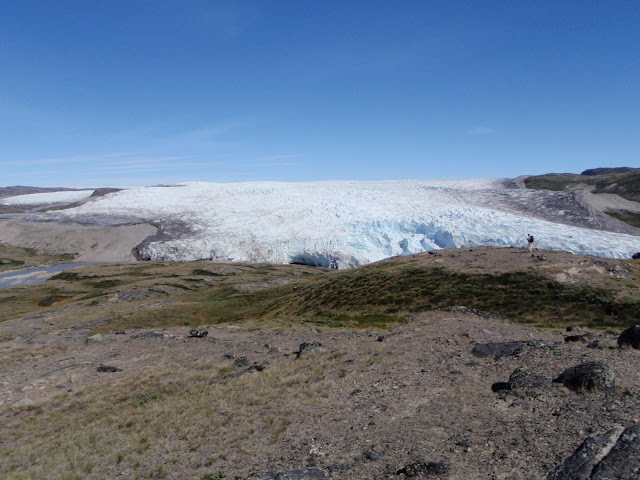 Results of the study, which was funded by the National Science Foundation with support from the National Aeronautics and Space Administration (NASA), are being published this week in Nature Geoscience.

David Ullman, a postdoctoral researcher at Oregon State University and lead author on the study, said there are two mechanisms through which ice sheets diminish -- dynamically, from the jettisoning of icebergs at the fringes, or by a negative 'surface mass balance,' which compares the amount of snow accumulation relative to melting. When more snow accumulates than melts, the surface mass balance is positive.

When melting outpaces snow accumulation, as happened after the last glacial maximum, the surface mass balance is negative.

'What we found was that during most of the deglaciation, the surface mass balance of the Laurentide Ice Sheet was generally positive,' Ullman said. 'We know that the ice sheet was disappearing, so the cause must have been dynamic. But there was a shift before 9,000 years ago and the deck became stacked, as sunlight levels were high because of the Earth's orbit and CO2 increased.

'There was a switch to a new state, and the ice sheet began to melt away,' he added. 'Coincidentally, when melting took off, the ice sheet began pulling back from the coast and the calving of icebergs diminished. The ice sheet got hammered by surface melt, and that's what drove final deglaciation.'

Ullman said the level of CO2 that helped trigger the melting of the Laurentide ice sheet was near the top of pre-industrial measurements -- though much less than it is today. The solar intensity then was higher than today, he added.

'What is most interesting is that there are big shifts in the surface mass balance that occur from only very small changes in radiative forcing,' said Ullman, who is in OSU's College of Earth, Ocean, and Atmospheric Sciences. 'It shows just how sensitive the system is to forcing, when it might be solar radiation or greenhouse gases.'

Scientists have examined ice cores dating back some 800,000 years and have documented numerous times when increases in summer insolation took place, but not all of them resulted in deglaciation to present-day ice volumes. The reason, they say, is that there likely is a climatic threshold at which severe surface melting is triggered.

'It just might be that the ice sheet needed an added kick from something like elevated CO2 levels to get things going,' Ullman said.