New work from Carnegie's Alan Boss offers a potential solution to a longstanding problem in the prevailing theory of how rocky planets formed in our own Solar System, as well as in others. The snag he's untangling: how dust grains in the matter orbiting a young protostar avoid getting dragged into the star before they accumulate into bodies large enough that their own gravity allows them to rapidly attract enough material to grow into planets. The study is published by The Astrophysical Journal. 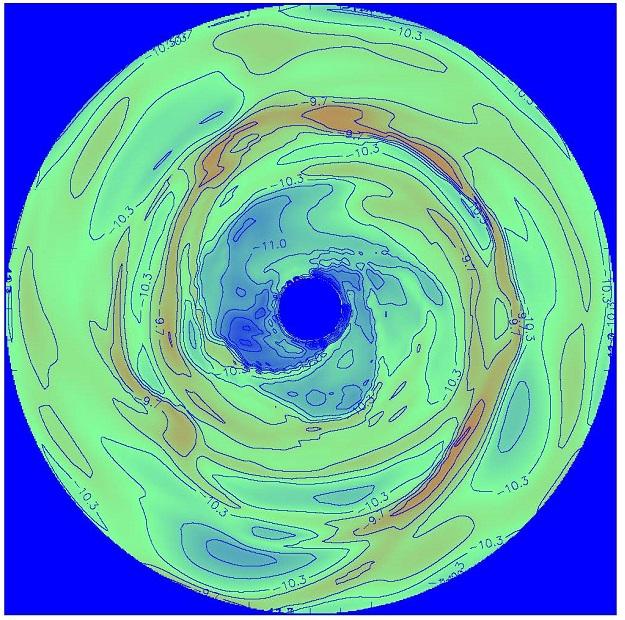 In the early stages of their formation, stars are surrounded by rotating disks of gas and dust. The dust grains in the disk collide and aggregate to form pebbles, which grow into boulders, and so on increasing in size through planetesimals, planetary embryos, and finally rocky terrestrial planets. But there are some difficult outstanding questions raised by this theory. One of these is that the pressure gradient of the gas in the disk would create a headwind that would spiral the pebbles and boulders inward toward the young protostar, where they would be destroyed.

The problem is most acute in bodies that are between 1 and 10 meters in radius, because they would be most susceptible to the gas drag. If too many particles in this size range were lost, there wouldn't be enough remaining to collide with each other and accumulate into planetesimals and, eventually, planets.

Observations of young stars that are still surrounded by their gas disks demonstrate that those similar in size to our own Sun often undergo periodic explosive bursts, about 100 years in duration, during which the star's luminosity increases. More importantly, these events can be linked to a period of gravitational instability in the disk. Boss's new work shows that such a phase can scatter the at-risk 1- to 10-meter bodies outward away from the developing star, rather than inward toward it.

Recent work has shown the presence of spiral arms around young stars, similar to those thought to be involved in the short-term disruptions in the disk. The gravitational forces of these spiral arms could scatter outward the problematic boulder-sized bodies, allowing them to accumulate rapidly to form planetesimals large enough that gas drag is no longer a problem. Boss's modeling techniques hone in on the idea that spiral arms might be able to answer the question of how a developing solar system avoids losing too many larger bodies before the boulders have a chance to grow into something bigger.

"This work shows that boulder-sized particles could, indeed, be scattered around the disk by the formation of spiral arms and then avoid getting dragged into the protostar at the center of the developing system," Boss explained. "Once these bodies are in the disk's outer regions, they are safe and able to grow into planetesimals."

Smaller particles, however, ranging between 1 and 10 centimeters, are much more likely to be accreted back into the protostar and lost, regardless of spiral arm formation, Boss' models show.

"While not every developing protostar may experience this kind of short-term gravitational disruption phase, it is looking increasingly likely that they may be much more important for the early phases of terrestrial planet formation than we thought,"

This work was partially supported by NASA.

Contacts and sources:
Alan Boss
The Carnegie Institution for Science
on June 25, 2015